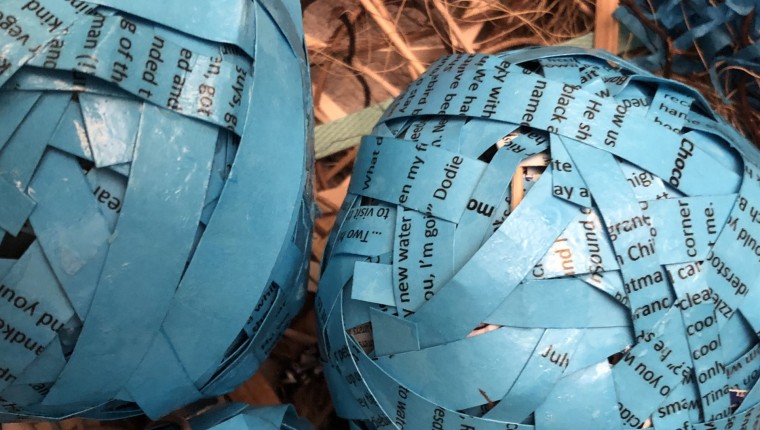 It’s interesting to look at “old” work and reflect on the changes and shifts in your creative path. I pulled out work that really are my “Aha” moments while preparing for my Emerging Artist video: They didn’t register at the time as being momentous, but they were and still are.

I’ve been weaving baskets on and off for at least 30 years! My first class was at the University of South Florida Craft Studios in the Student Union in the late ’80s or early ’90s. My instructor brought supplies and taught one style of basket: Appalachian style egg or potato baskets in natural round reed with grapevine handles and god’s eyes.

No written instructions, she wove and I followed suit. Very quickly I wove baskets like there was no tomorrow. I was in egg basket heaven. Round reed, flat reed, grapevine. I dyed reed with powdered Rit dye. Started harvesting naturals like philodendron sheaths, big leaves and vines. A boutique in Dade City became an retail outlet. One Christmas everyone in my family received this basket or a version called a “key” basket.

My teacher moved. I stopped weaving. Making the same basket shape bored me. There were few books on basketweaving..and no such thing as the internet and Google. Several years later, weaving madness struck again! My friend Jill invited me to a meeting of the Tampa Bay Basketmakers Guild (TBBG).

Two basketry artists taught workshops that have influenced how I make baskets. Betty Kemink, one of TBBG’s original founders, taught my first formal class with written instructions. She exhibited for many years in Tampa Bay’s prestigious fine craft/art festivals and is credited for teaching many of the early days basketmakers.

Betty’s berry basket is a basic one and usually the first basket taught to a new student. I was somewhat leery of this project since the instructions called for at least 40 carefully spaced apart spokes. All was well. My berry basket was perfectly shaped and symmetrical, and I was ready to tackle the rim and weave a pretty braid (never had done this). Before you start on the rim, you have to soak the basket in water to make the spokes pliable. Rather than fill the sink with water, I decided to save water and used a bucket.

Big mistake. Water expands reed…I couldn’t get the basket out of the bucket! After much pulling and tugging, my beautiful basket emerged, misshapened and asymmetrical. Wavy! Betty was a little horrified when I showed her the uneven, odd basket, but I went on and finished it, making up the random pattern on the braid rim until running out of reed. C’est la vie, they say.

I added a detachable bracelet woven in a sculptural peyote stitch. It centered around a blue frog bead on a lily pad, and the bracelet took longer to make than the basket itself! I think I named the piece Blue Frog on Lily Pad.

This basket won awards in TBBG’s one and only basket competition it’s ever had since I’ve been a member: Grand Prize and First Place, round reed. Beginner’s luck? I made $29!

Diane Lunow from Texas came to town and taught her specialty, knotless netting weaving. This techniques takes the simple and ancient skill of making fishing nets from a line/thread (buttonhole stitches) sewn around a “spoke” of sorts. Since I’m a sewer and a good hand sewer, knotless netting was easy and fun for me. The process is meditative and very slow.

OTHER CONTEMPORARY ART TEACHERS
Not Necessarily Basketmakers I Met Through Florida CraftArt (at that time, Florida Craftsmen)

Other who have influenced my current work:

– Jerry Bleem: Works with non-traditional materials (such as colored strips of corrugated cardboard, strips of clear acetate and staples) to make baskets.
– Bob Ebendorf: Jeweler and maker who uses found objects.
– John Garrett: I never took a class from him but have seen his work up close. He recycles anything and everything. Jill took a few workshops with him, so I understand his creative thinking. His works look random but really are not.

– And The Cardinals: A pair of cardinals that flew around my garden last spring looking for a place to build a nest. After a few days of watching their attempts, I made them a “bird nest” basket and attached to vines underneath the eaves of the house with sandwich ties. The birds moved in and raised two hatchlings.

The thought of story-telling through my baskets-turned-to-mixed media work was sudden. My bird nest theme (I’d been making and informally teaching random woven nest baskets made from scrap reed for several years) became literal. Birds have their nest “eggs. ” And, it seems, so did I.

Building a Nest Egg
This nest is made of trash picked up from the street, a garbage can from the Florida State Fair and various back yards and gardens.

The “eggs” or treasures are three short stories printed on blue cardstock cut into strips and woven around a softball-shaped and sized armature.

The three stories are childhood memories about my brother Richard, my Grandmother and a cat named Dodybird. Read about them in next week’s blogpost!