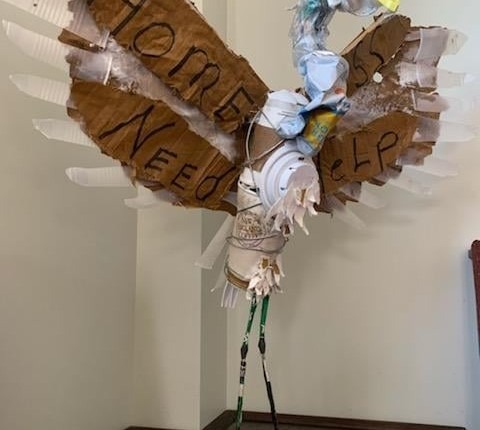 Environmentalism is a cornerstone of the Dimple Book Series.

The books showcase ways to introduce children to the facts surrounding climate change, while providing coping skills for an intimidating reality, as well as ways to do their part. Climate change and Global warming are issues that our children are going to have to face, so we do all we can to inform, motivate and inspire them- not only through our work with Dimple’s Days, but also by doing our part.

This year at the Big Cleanup Clearwater in October, Adam was asked to make a sculpture out of the actual trash cleaned up that day. Two of our primary passions- Art and Environmentalism collided again and Adam was happy to accept.

He nearly had carte blanche to create whatever he could out of bags of trash (they went through a sanitation process) the only rule- it had to be entirely created from trash picked up from that day.

Watching him dump out and sanitize the bags, it was only moments before he said, “I know what I’m going to do”. I wish I could have seen what he did in that litter. A beautiful Egret beckoned to him, and these piles of garbage became his work: “Bird of Paradise Lost”.

After taking the necessary precautions, our garage became his workshop for a few days, so I was able to watch Tibi’s progress (a nickname we gave her). It was amazing how plastic cups became feathers, discarded bottle caps were transformed into eyes and cigarette boxes formed her perfectly shaped feet.

The most incredible part for me was one of her final touches. Her open wingspan.

Amongst our bags of litter from that day, a ‘Homeless, Need Help’ sign was found. The way Adam incorporated it into this piece is hauntingly beautiful.