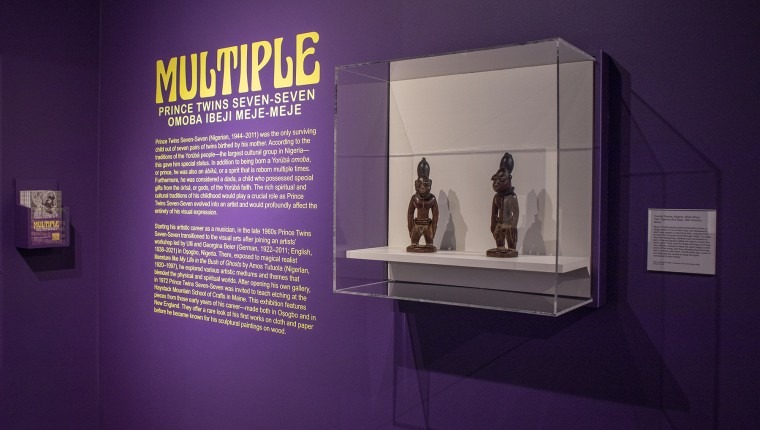 Mystery and Magic Abounds in a Purple “Box”
by Multiple: Prince Twins Seven-Seven

. . .
The small one-room Minck Gallery at the Museum of Fine Arts is a delight if you love the color purple, the color of royalty and kings.

And even more so if you feel the magic within the mysterious, at times whimsical, mix media paintings, drawings and etchings of a unique artist who was the only surviving child out of seven pairs of twins.

Prince Twins Seven-Seven (1944-2011) was born an omobos or prince among his people, the Yorúbà, the largest cultural group in Nigeria. According to the traditions, he was also an òbikù, a spirit that has been reborn several times and a dada, a child who possessed unique gifts of spiritual insight and power from the gods of the Yorúbà faith. Exhibition Curator Dr. Genevieve Hill-Thomas is on the faculty of Liberal Arts at Ringling College of Art + Design. She says Prince Twins Seven-Seven blended “abstracted images of the physical world and evocations of the spirit world creating a powerful and international style that bridges traditional and contemporary arts.” Prince’s art draws from traditional Yorúbà art but are modern pieces that reflect his experiences in both Nigeria and the United States.

The idea for this exhibit came about during COVID-19 when the museum staff went through and organized its various collections. Hill-Thomas was somewhat shocked to come across several early 1970s works by the African artist.

“I couldn’t believe that all of this early work was here,” she says of the artist who became known for sculptural paintings on wood.

Hill-Thomas designed the “royal” space that I perceived as a brightly colored purple jewelry box accented in yellow to display 14 special pieces – 10 works on paper or cloth by Prince Twins Seven-Seven and four other Yorúbà sculptures from MFA’s collection.

Interestingly, Prince began a public, artistic career as a musician, singing and dancing in a band. A workshop in the late 1960s led by Ulli and Georgina Beier in Osogbo, Nigeria shifted his attention to the visual arts. Exposed to magical realist literature, he explored different types of artistic media and themes blending the physical and spiritual worlds, says Hill-Thomas.

“How to depict the divine?” she asks. “Divine is an abstract concept. Mysterious, other-worldly.”

Prince opened his own gallery. In 1972 he was invited to teach etching at Haystack Mountain School of Crafts in Deer Isle, Maine.  This exhibit features pieces from his early years in Osogbo and New England.

The Mysterious, Spiritual and Otherworld

Yoruba religious belief is that the otherworld, a place of spirits and gods, exists simultaneously with the physical world. Communication is through dreams and divination. Sometimes the spiritual beings help and guide those living in the present.

Prince Twins Seven-Seven had said, “When we were very young, they used to make us sit under a tree, under the Moon, and tell us stories, stories that can educate you from not doing bad things… You see, all these stories… I never knew at the time, I’d been given a goldmine.”

Multiple. Two Halves of a Whole.

Prince Twins Seven-Seven was born with the name Omoba Taiwo Olaniyi Oyewale-Toyeje Oyelale Osuntoki but changed it when he left home. His new name identified himself as a twin who has been born seven times.

This theme is seen throughout Prince’s work. Two halves of the world, the physical and the spiritual, make up the whole.

For the Yorúbà people, the number 2, indicates balance. Much of Prince’s work features duality and the number two – two figures, two animals, two heads. He was a surviving twin. His sister died at a young age. Prince believed he was part of his sister and both male and female.

As a twin, Prince Twins Seven-Seven believed that he had both male and female spirits. This print shows an African Princess against the backdrop of New York City skyscrapers. Some thought this was a portrait – others interpreted this print as a self-portrait.

A print from the same etched plate with a different color of ink.

Hidden symbolism is seen throughout Yorúbà art works. From the exhibition’s brochure, a description of the divination vessel –

“Inside the body of the chicken, which is a lidded vessel, the number nine appears twice. Hidden away from sight, these numerals were written using indigo, which is a spiritually powerful substance. The two number nines form a duality that is significant in ifà divination; the number nine is mẹsàn, which denotes ‘it turns.’ This is related to the concept of results and exchanges – much like the àgéré ifà which depicts a figure offering a chicken in return for desired guidance;” the clarity and wisdom of the divine.

These are many mysterious references and messages and in this exhibit that I would not have interpreted but for my talk with Curator Hill-Thomas and reading of the exhibit brochure. My experience with African art has been traditional craft items such as masks, weavings and wood carvings.

Prince Twins Seven-Seven incorporated traditional Yorúbà art themes and techniques such as patterning and use of cloth with those of a modern mixed media artist living in the U.S. He shared his visions of the otherworld blurring the lines between it and the real, physical and contemporary world.

It’s time to let Prince Twins Seven-Seven’s art and his dreams speak to you directly.

An otherworldly scene with a hidden building in a forest, two creatures and a snake. Prince Twins Seven-Seven often said the creative process was like being in a dream-like state.

The artist often painted scenes connected to the spiritual otherworld. Here, we see an airplane, motorcycle and a car…and many beings. Prince Twins Seven-Seven said he would draw his cultural beliefs. At the same time, he didn’t want to paint “what was existing in our [world].”

This striking painting is more blue (teal) than green to me and among my favorites in this exhibit. Prince Twins Seven-Seven used a traditional medium, cloth that his wife had made, to create this artwork. Typically, this cloth would have been used to create a printed textile.

Here a human figure wearing clothes denoting someone of high status is standing next to two pangolins, one which sits on a coiled snake. Pangolins are small mammals covered in scales, called “the scaly anteater” and are among the most trafficked mammals in Asia and Africa.

Their meat is considered a delicacy in certain cultures and their scales are used in traditional medicine and folk remedies to treat a range of ailments.

Among the Yorúbà, pangolins are often associated with politics – Hill-Thomas said  the scales are similar in robes denoting chiefly status. Notice that all the space on the cloth is filled in.

Prince spent the summer of 1974 at Haystack Mountain School of Crafts teaching etching. The invisible object? The artist is expressing the spiritual. . . the unseen.

Also created in Maine, this scene is set in Yorúbàland and recalls the magical realist stories of Amos Tutuola (1920-1994). Here, humans, spirits and animals surround a queen seated on a fallen tree. Look closely at the left side – there’s  part of a newspaper in this work.
. . .

On the left, the staff depicts Sàngó, a royal Yorúbà ancestor as well as an òrìsà or god, and the patron of ìbejì or twins. Prince Twins Seven-Seven said that as a child, he spent a lot of time with the worshipers of ancient Yorúbà gods since he was a twin and also believed to be a Sàngó reincarnation.

On the right, this figure represents the divinity of the Earth known as Onilè and would have been worn by a man or woman who was a member of the Ògbóni, a powerful society of elders. Prince’s mother was a member of this group.

Many Yorúbà people believe twins share a single spirit. It is thought that when one twin dies, the deceased’s spirit might try to convince the other to join them in the otherworld. The parents might commission a pair of carved figures to house the twins’ spirit and care for them as if they are children, hoping to keep the spirit happy in the world of the living.

My experience in this special, mystical exhibit space made be think about dreams and how we – and artists – express them.

“Art belongs to another world entirely. Because sometimes, as an artist, you create things that, by the time you finish, you ask yourself, Now, how did I do this?”
. . .