‘The Last Dog Standing in Aripeka’ —
A Visit with Leslie Neumann

The celebrated landscape painter and conservationist chats up her days with Rosenquist and love of beeswax.

by JULIE GARISTO| Jan. 26, 2018
ALL PHOTOS BY DANIEL VEINTIMILLA
(unless otherwise noted)

Leslie Neumann wouldn’t live anywhere else in the world — easy to understand as we gazed at an amazing panorama of coastal marsh from her home-studio balcony in Aripeka.

We took multiple shots with the Canon and stitched photos in an attempt to capture the swath of tall skinny palm trees fortifying the horizon. They surrounded a wavy carpet of seagrass, mangroves and the deep-blue brackish water in Hammock Creek. A flock of Ibis whooshed by as an Anhinga vogued with her back to us, flaunting an elegant wingspan as she dried her feathers.

Taking it all in, we understood a little better the magical serenity and mystery evoked in Neumann’s encaustic/oil paintings — and the natural grandeur that inspired the lifelong artist to become a conservationist.

“I love where I live so much that I don’t go out as often as I should,” Neumann confessed. “Yesterday I was debating going to an event, and an osprey landed on my balcony with a fish in its mouth. I took it as a sign that I shouldn’t leave.”

Neumann has lived in New York and California but found her perfect little corner of the world in the Florida town of just around 500 residents, 22 miles north of Tarpon Springs. When she started building her house in 1989, a coterie of high-profile artists also called Aripeka home — James Rosenquist, who died less than a year ago in New York, Tony Caparello, Arline Erdrich, Dan Stack and Steve McCallum. McCallum, Stack and Neumann are the lone survivors. McCallum has relocated to Ohio, and Stack lives in St. Petersburg.

“I’m the last dog standing in Aripeka,” she quipped.

In the ’90s, the Aripeka artists gathered for “hootenannies” and lounged on the decks of each other’s boats. Rosenquist, according to Neumann, was a gregarious and down-to-earth neighbor who didn’t like to be alone. He enjoyed tinkering and entertaining and popped in from time to time with a six-pack of beer.

“Jim brought the beer but moved onto to the hard stuff pretty quick,” she clarified. “He liked to moon us!” she added with a hearty laugh.

Rosenquist indirectly lured Neumann to Aripeka. The renowned pop art pioneer and contemporary of Warhol worked in residence at University of South Florida’s Graphicstudio, where other major figures such as Robert Rauschenberg taught workshops and contributed prints still in the studio’s permanent collection. While there he met Stack, who became his studio assistant for 10 years during the ’70s and ’80s. Rosenquist fixed Stack up with Neumann and they got married.  At first, she worked as an art teacher in Queens and split her time between Florida and New York, but Aripeka put a spell on her.

Neumann’s career blossomed in Florida. While she endured the loss of friends and her mother and a divorce, she enjoyed a string of successes, showing in Clayton Galleries, the Gulf Coast Museum of Art and the Morean Arts Center, where she’s now on the Board of Trustees.

The painter conceals feelings of loss with humor and moxie. She riffs on adulting. As situations arise with chores and paperwork involved, she shouts, “More homework!” and laughs. Yet, a visit to her immaculate, custom-built home with natural light, high ceilings and a third-floor studio seems to betray this notion. Meticulous portfolios on one side; pastel color-coded files with neat handwriting on another. All the while, wall-to-wall windows surround us with that amazing, distracting view. 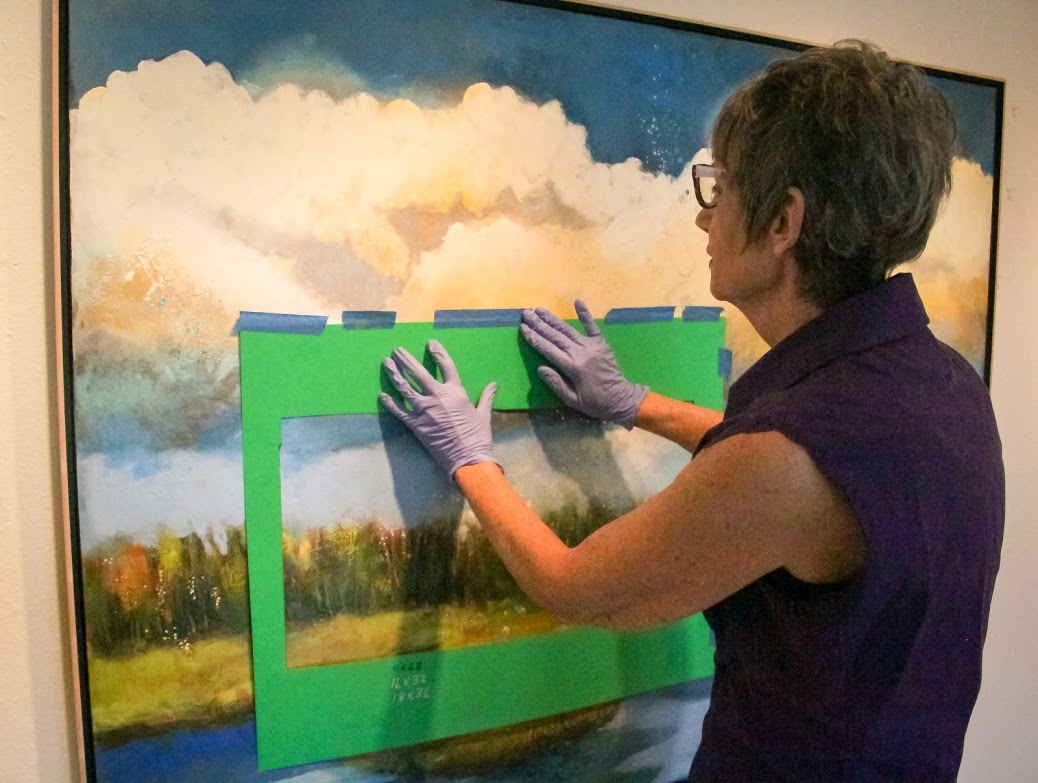 Her assistant, Evelyn Pazmino, helps with day-to-day business. Neumann, who doesn’t have children or go overboard on social media, gushed about Pazmino graduating from Pasco-Hernando Community College with honors on Facebook.

Neumann indeed values a solid artistic education and says artists should have a foundation of learned skills before attempting to find their own technique.

Born in Plainfield, N.J., she received a BFA from the California College of Arts in Oakland and a Master’s in painting from New York University in Manhattan, followed by a fellowship from the New York State Foundation for the Arts, an Individual Artist Fellowship from the State of Florida, and an Artist Enhancement Grant from the Florida Division of Cultural Affairs. In 2005, the Vero Beach Art Museum honored her with a 15-year retrospective of her work.

Neumann’s encaustic paintings show the poise and control of a master with elements of unpredictability. She writes in her artist statement that she’s inspired by the natural forces found in cosmic and terrestrial landscapes.  Oil paint comes first and then she applies the wax with a brush while it’s still hot. After it congeals, she scrapes through to reveal another layer of color; she then engraves pictographs, words and marks into the molten wax.

“It’s not because I don’t plan ahead … my planning doesn’t seem to matter,” she said during a demonstration. “My paintings have a life of their own. They evolve and I follow them wherever they go.”

She jokes about her perceived inability to multitask. A perfectionist who spends hours painting, Neumann says she likes to keep life as simple and stress-free as possible. At 68, she’s vibrant, slender and healthy, crediting yoga and meditation as her lifesavers.

We ask her questions while she works and she doesn’t mind the interruptions — not too much anyway.

“This will drive you crazy, but the longer you know me, you know I can only do one thing at a time … okay, I can do two things at once (laughs). I can tell you this without breaking my concentration: The wax is of made of beeswax, powdered pigment, what gives it its color, and a little bit of Damar Resin, which is a binder. … I also paint with oil paint. Those pigment sticks are oil paint in stick form. So, the oil paint and the wax are compatible with each other. You actually don’t mix them together. That’s verboten. You’ll see while I paint that I apply a layer of wax, a layer of oil paint and a layer of wax. It’s truly an amazing process.” 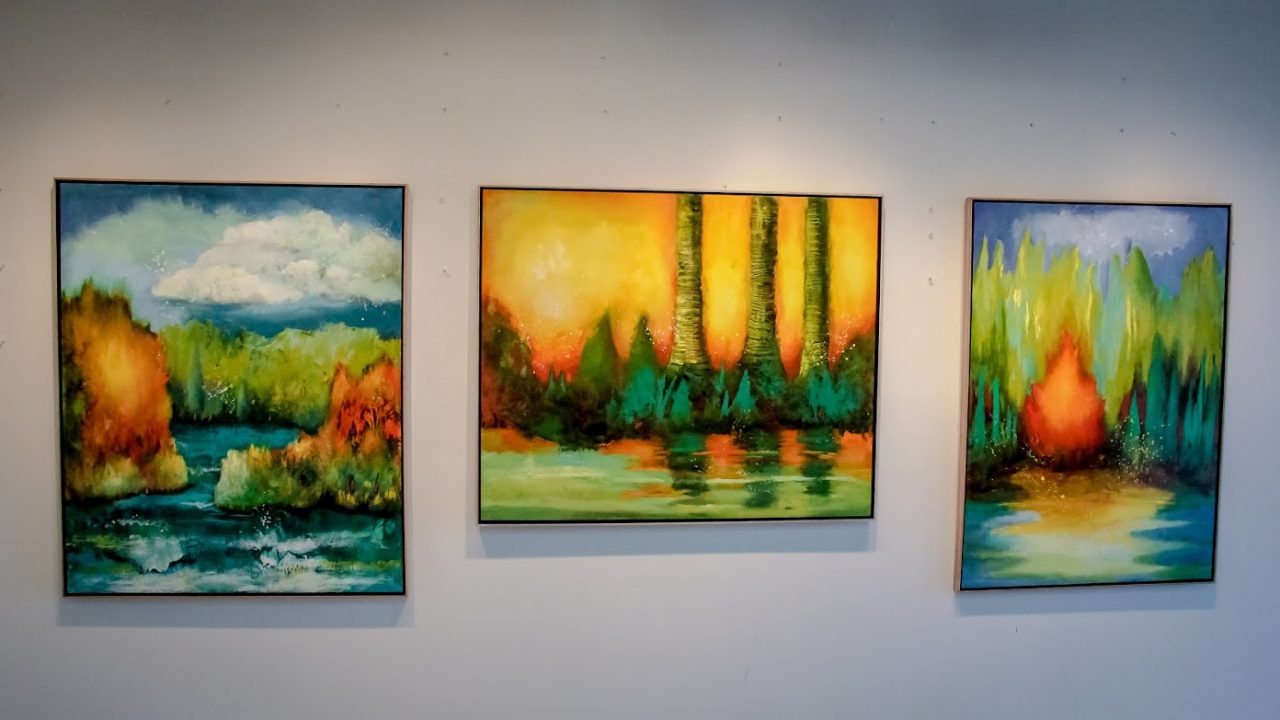 Neumann starts with an “underpainting” or sketches in oil paint to get an overall idea, then she starts to apply wax, layering, and then a shift occurs when it starts to look like something.

“That’s when the reluctant and disciplined editor must appear,” she says. “I don’t try to replicate what I see, but what I feel about what I see.” Neumann’s tools include a heat gun, iron and palette knife. She doesn’t shy away from fingerpainting. 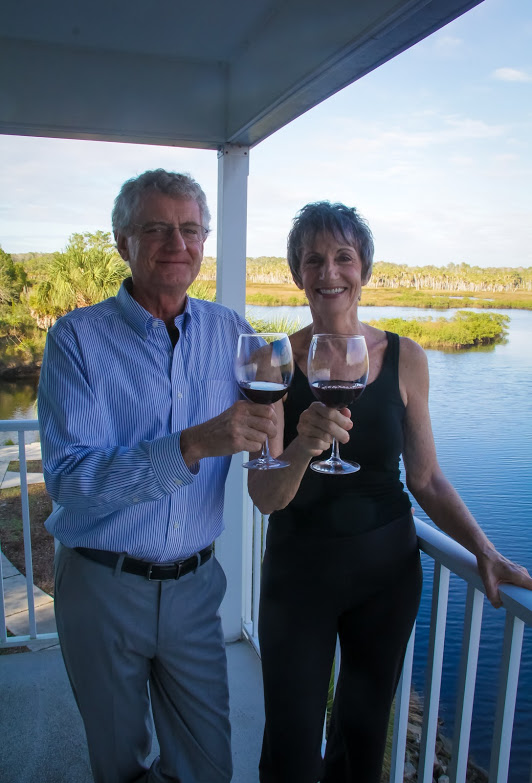 During our visit, she transforms a treeline to a dreamlike scene with golden sunbursts that becomes more and more otherworldly as she refines it.

Michael Binford, Neumann’s life partner for the past two years, chats up Neumann’s cosmic paintings. I ask if NASA images inspired them. Neumann says no; they’re from her imagination. Binford commented that he noticed remarkable similarities when photos were released after certain works were completed. A geography professor at the University of Florida, Binford is a kindred spirit who’s studied and cherishes Florida’s primitive landscape.

“We’re very similar in where we are in our careers,” she said. “He’s very passionate about what he does, and I’m passionate, and we love to recreate together.”

Neumann is still passionate about conservation. She belongs to the Gulf Coast Conservancy, a 501C3 not-for-profit land trust, started in 1992. “I had never done land conservation work prior to moving here,” Neumann said, “but I was raised in a family that was very egalitarian and very involved in civic matters. We liked to think that we could have a positive impact on the world if we were just active and committed, so I had a long history of activism.”

The efforts of Neumann and others in the Conservancy helped rescue 14,000 acres of coastal wilderness. “Our founding member, the now deceased artist Arline Erdrich, must be credited with the idea that we could either fight each injustice, fire by fire, or we could have a much more broad and comprehensive manner of preserving land, which is what we choose to do,” she explained. “So, with the help of other more established land conservation groups, such as the Nature Conservancy and the Audubon Society and the Alachua Conservation Trust, we put together an ambitious plan of creating wildlife and nature corridors along the Gulf Coast in Citrus, Hernando, and Pasco counties.” 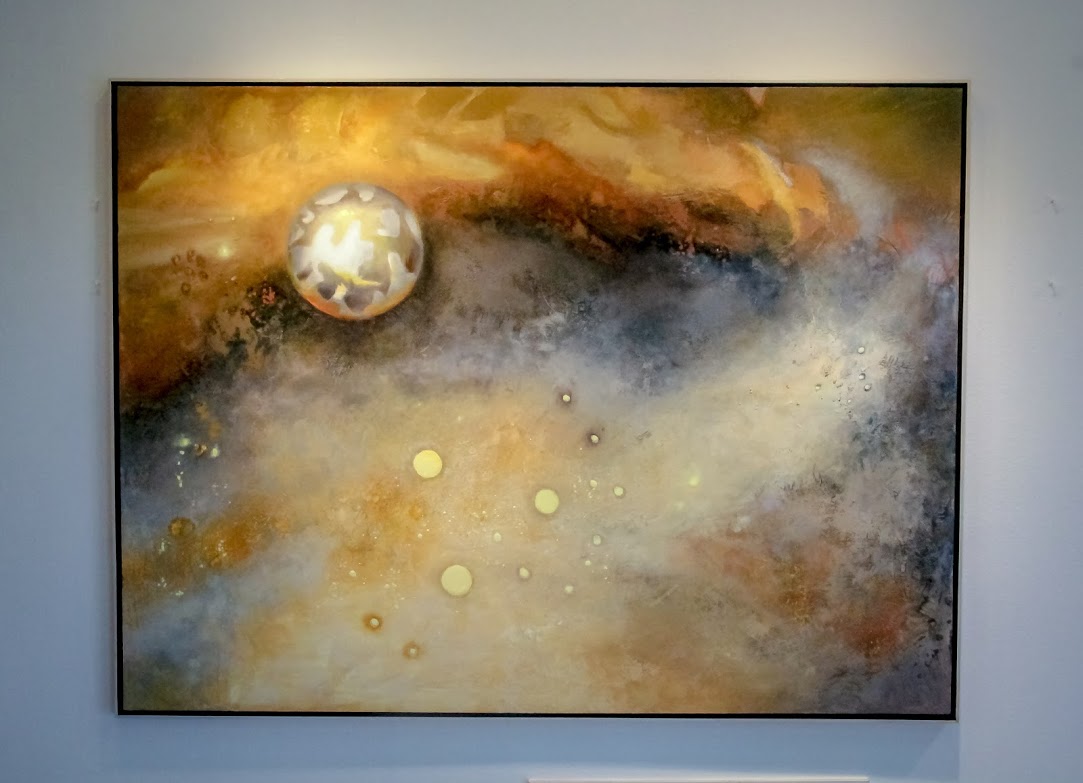 For the past several weeks, Neumann has been channeling her love of nature and concerns into large-scale works for her next solo show, “Leslie Neumann: Manna from Heaven…and Earth,” at the Morean Arts Center this spring. She’ll be showing new works in tandem with a group show,  “Water over the Bridge: Contemporary Seascapes.” Show dates are May 11 thru June 23. “I’m using dramatic ‘storm-scapes; to express our current political conditions,” she explained.

While Neumann has an undeniable activist streak, the joy and the magic of being close to nature will always drive her muse most.

“I had an experience this morning that would you would have really loved,” she shared via email. “I walked up to the bridge at dawn and saw the eclipse of the moon as it sank in the west — and because it’s a supermoon, the tide was super low.  So there were hundreds and hundreds of wading birds enjoying being able to fish in the mud flats. …Ah, Aripeka. Is there any wonder I choose to stay here?”