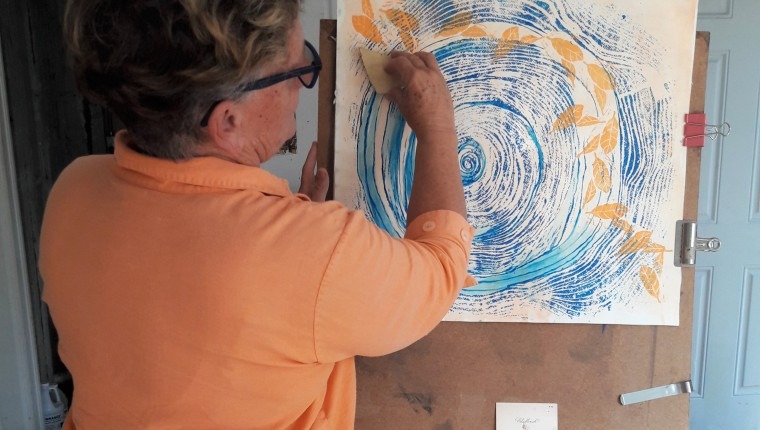 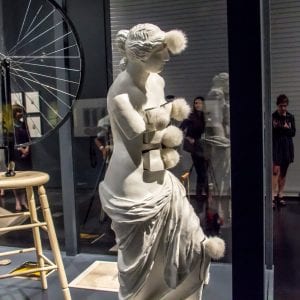 The artists shared a love of play and need to question and subvert the status quo — but there were also fundamental differences. Learn about both and see ingenious pairings of their works at the Dalí Museum this spring.

All photos by Daniel Veintimilla 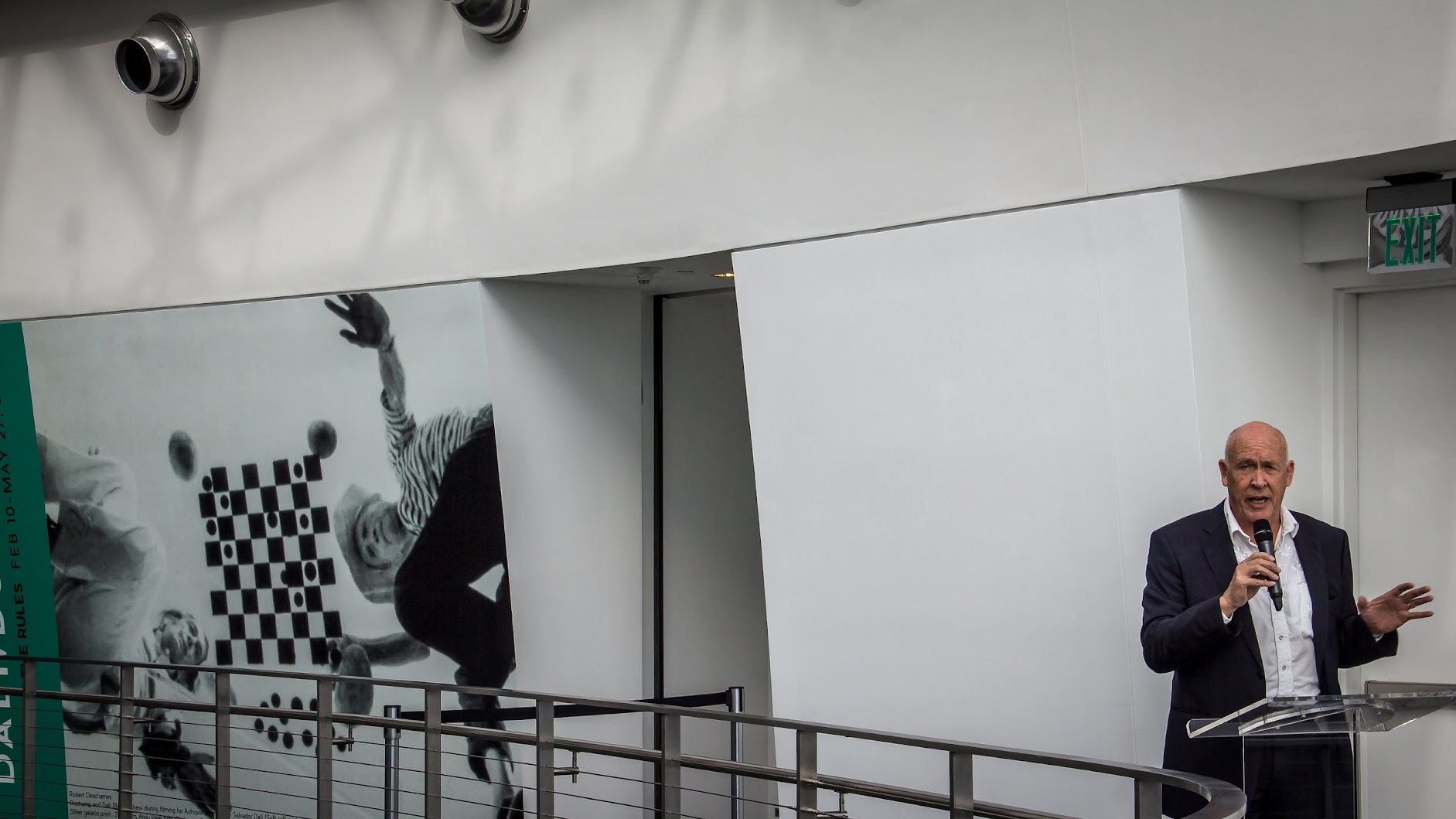 Dali Museum Executive Director Hank Hine praises both artists for being progenitors of some of the most important tendencies in 20th Century art. Photo: Daniel Veintimilla

Salvador Dalí and Marcel Duchamp may both be 20th-century artists known for oddly provocative works, but they inhabited different spheres of the art world.

According to Hank Hine, “they shared an impulse — getting to the essence of life.”

The Dalí Museum Executive Director gathered last Tuesday with curators and museum staffers to unveil the new exhibition Dalí/Duchamp, opening Saturday, Feb. 10, on display through May 27.

Beyond the expected arrangements, such as Duchamp’s upside down urinal, “Fountain” placed next to Dalí and Edward James’ famed “Lobster Telephone”, the exhibition cleverly pairs the artists’ works and presents them contextually as “a conversation through art.” There’s a room devoted to games and stunning original Dalí works on loan, as well as a famous photo of Duchamp in drag as his “Rrose Sélavy” persona, taken by Man Ray.

Curators Dawn Adès and William Jeffett offered keen insights and fascinating anecdotes, much of which will be available to the public by way of self-guided audio tours.

“Two of the greatest artists of the century, they are seen as opposites in almost every respect,” explains Adès.  “Duchamp is celebrated – or blamed, depending on your point of view – with the invention of the ‘readymade’ and the rise of conceptual art. Dalí is seen as the defender of painting, champion of an artistic tradition to which Duchamp dealt a death blow. Duchamp famously withdrew from the art world, refused to make a living as an artist and apparently dedicated himself to chess. He was detached, non-judgmental, admired, and did not seek fame. Dalí, on the other hand, did. He made a spectacle of being an artist, courted notoriety, devised publicity stunts and became the first modern artist-celebrity.”

During the reception, Jeffett explained how the cachet of each artist’s work changed from decade to decade. Both thrived in the 1930s. Duchamp dipped out around mid-century right when Dalí peaked, and in the ’60s, Duchamp experienced renewed interest and Dalí fell out of fashion. “With time, it’s possible to see things in a new light,” Jeffett said.

Jeffett recounted that Duchamp had a close friendship with John Cage. The pair visited Dalí in Spain with Marcel’s wife, Teeny Duchamp, in the 1960s. The more self-effacing Marcel Duchamp patiently listened to the self-proclaimed genius speechify, bewildering the famed composer, who remained even more disbelieving afterward.  More about Duchamp and Cage’s relationship here.

We learn through the exhibition that the 50-year long friendship ran deeper than their shared artistic interests, which included eroticism, language, optics and games. Likewise, Dalí/Duchamp is a testament to the fruits of collaboration. It’s presented with the  Royal Academy of Art, which also co-organized an earlier incarnation of the exhibition in London with The Dalí, the Gala-Salvador Dalí Foundation and the Association Marcel Duchamp.

Dalí/Duchamp showcases three paintings never before seen at The Dalí – Christ of Saint John of the Cross (c. 1951), Apparition of Face and Fruit Dish on a Beach (1938) and Two pieces of bread expressing the sentiment of love (1940) – in addition to Duchamp’s groundbreaking assemblages and ready-mades, less familiar photographs by Dalí, paintings by Duchamp, and correspondence and collaborations between the two artists. It’s all organized as a dialogue between them through four themes – Identities and a Challenge to Painting; Playing Games; Science and Religion; and the Body and the Object.

Upcoming events in conjunction with Dalí/Duchamp include Coffee with a Curator lecture series; Artflix, a themed movies series; activities for families in museum’s free first-floor Stavros Education Room; monthly Thursday evening game nights, an homage to Dalí and Duchamp’s love of games. The series will kick off Feb. 22 with Drag Queen Bingo, in collaboration with Hamburger Mary’s, including a talk on the artistry and history of drag. On March 29, The Dalí will host the ultimate chess game day with special guest, Grandmaster chess champion and co-author of Marcel Duchamp: The Art of Chess Jennifer Shahade for a lecture, open games with ranked area chess players and the opportunity to face off against Shahade in a Surreal Simul Chess Game. Events for April and May are also planned. 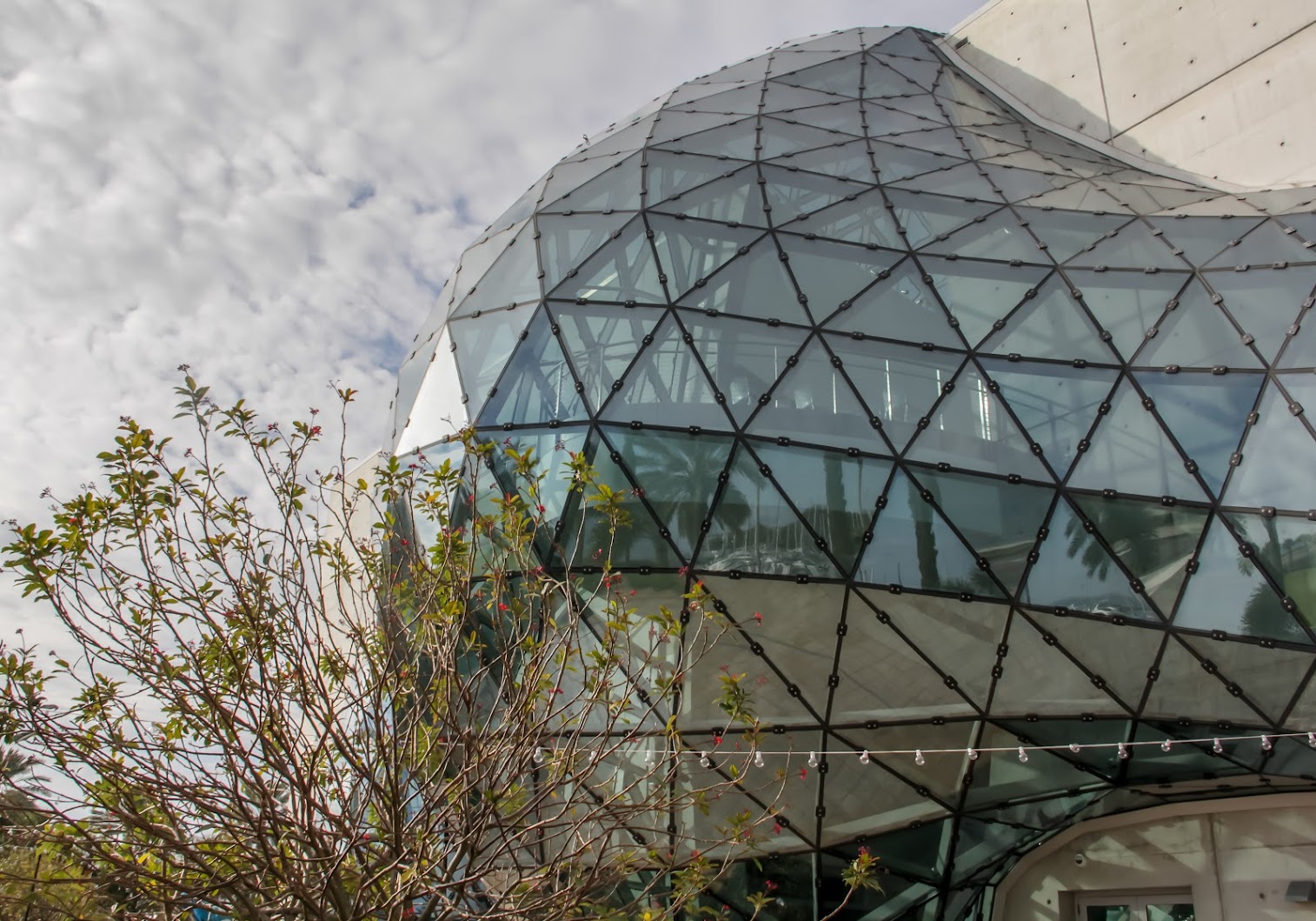 The exterior of the Dalí museum is a work of art on its own, designed by architect Yann Weymouth. Photo: Daniel Veintimilla. 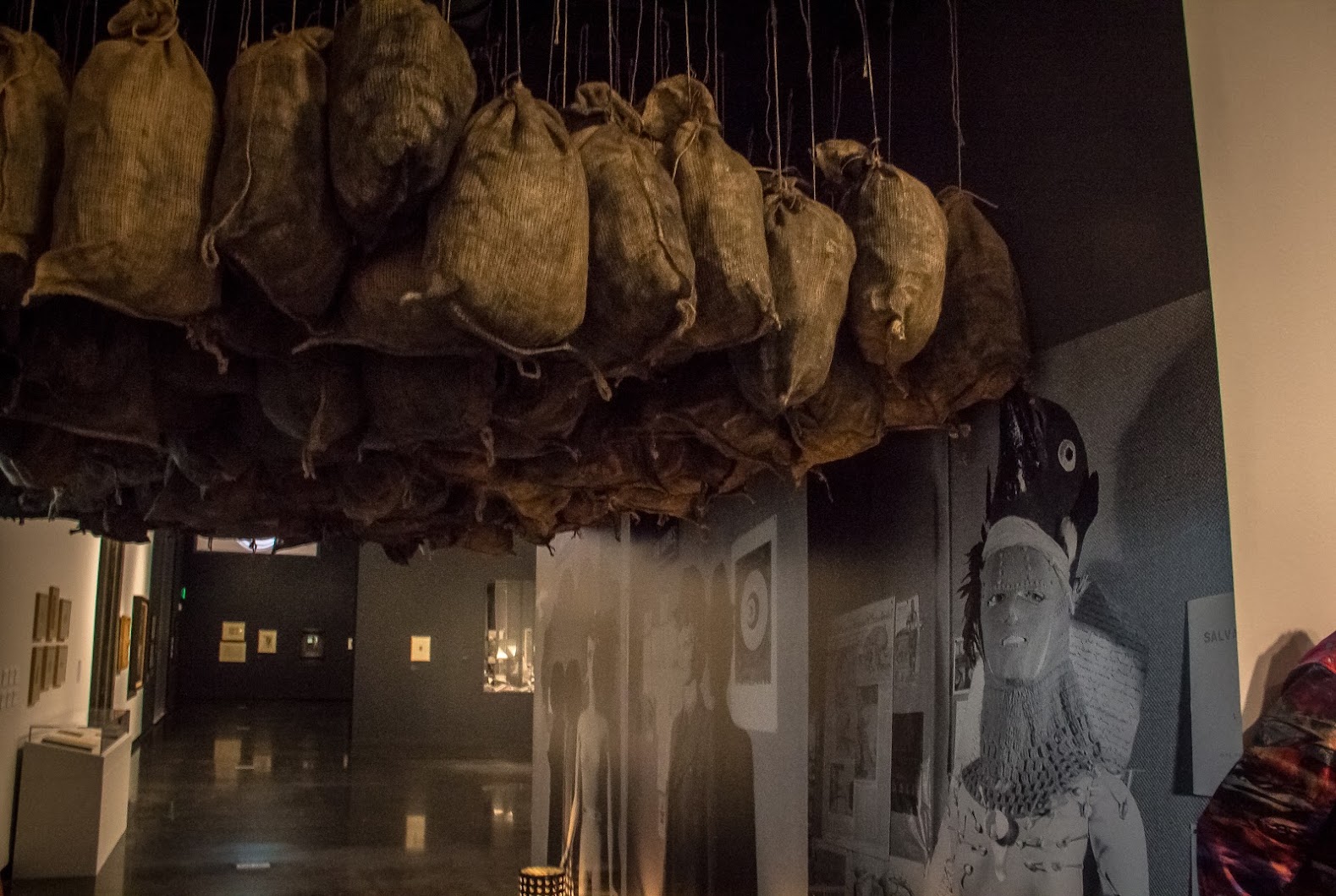 Burlap bags hang over the entrance of Dalí/Duchamp, a tribute to a 1938 International Surrealist Exhibition at the Galerie des Beaux-arts, Paris. In that show, the main hall became a simulation of a dark subterranean cave with 1,200 empty coal bags suspended from the ceiling. The groundbreaking event featured performance and installations, and works by Dalí, Wolfgang Paalen, Duchamp, Max Ernst and Man Ray. Photo: Danel Veintimilla 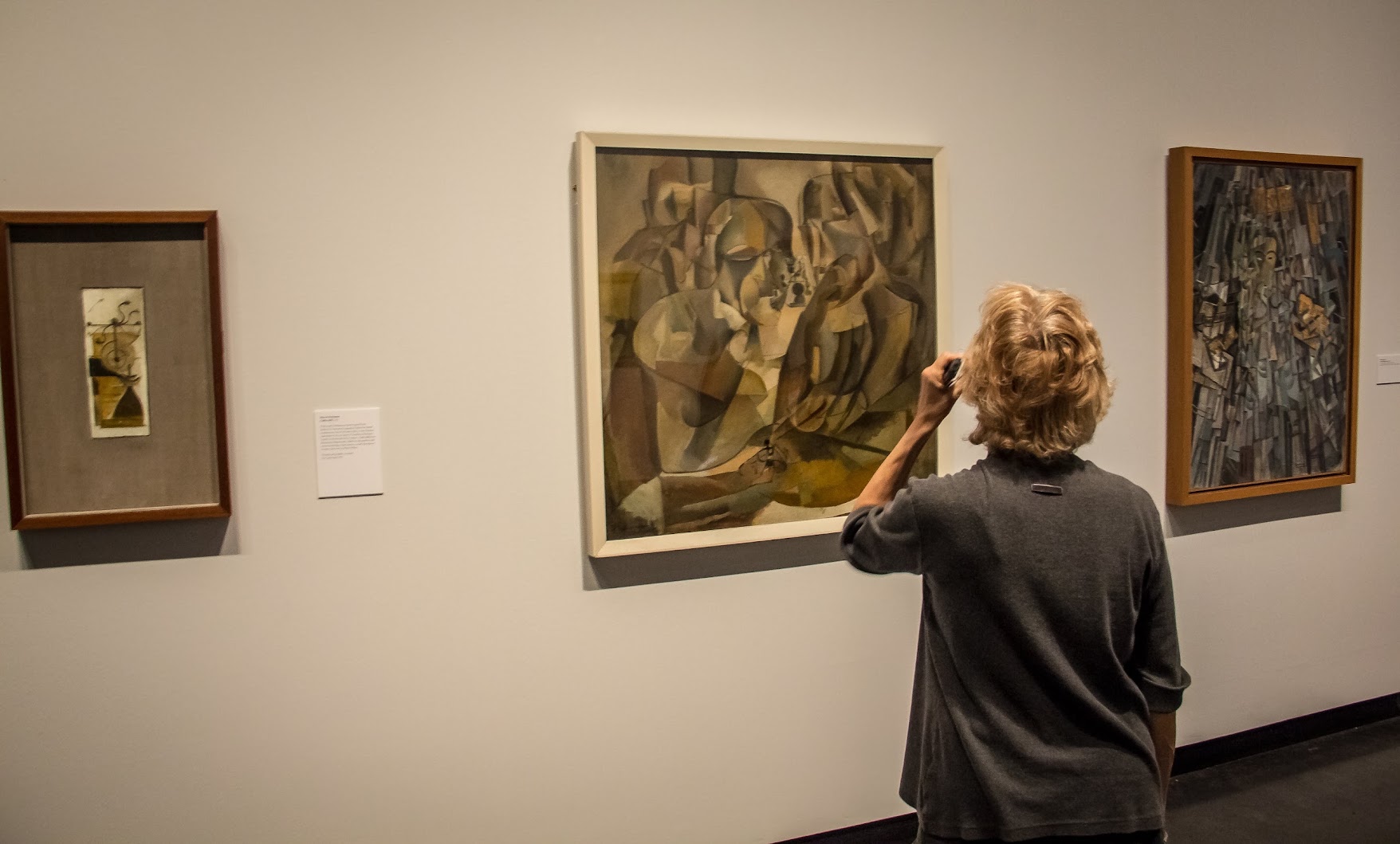 A viewer observes cubist and similar influences on Dalí and Duchamp artists in their early career. Photo: Daniel Veintimilla 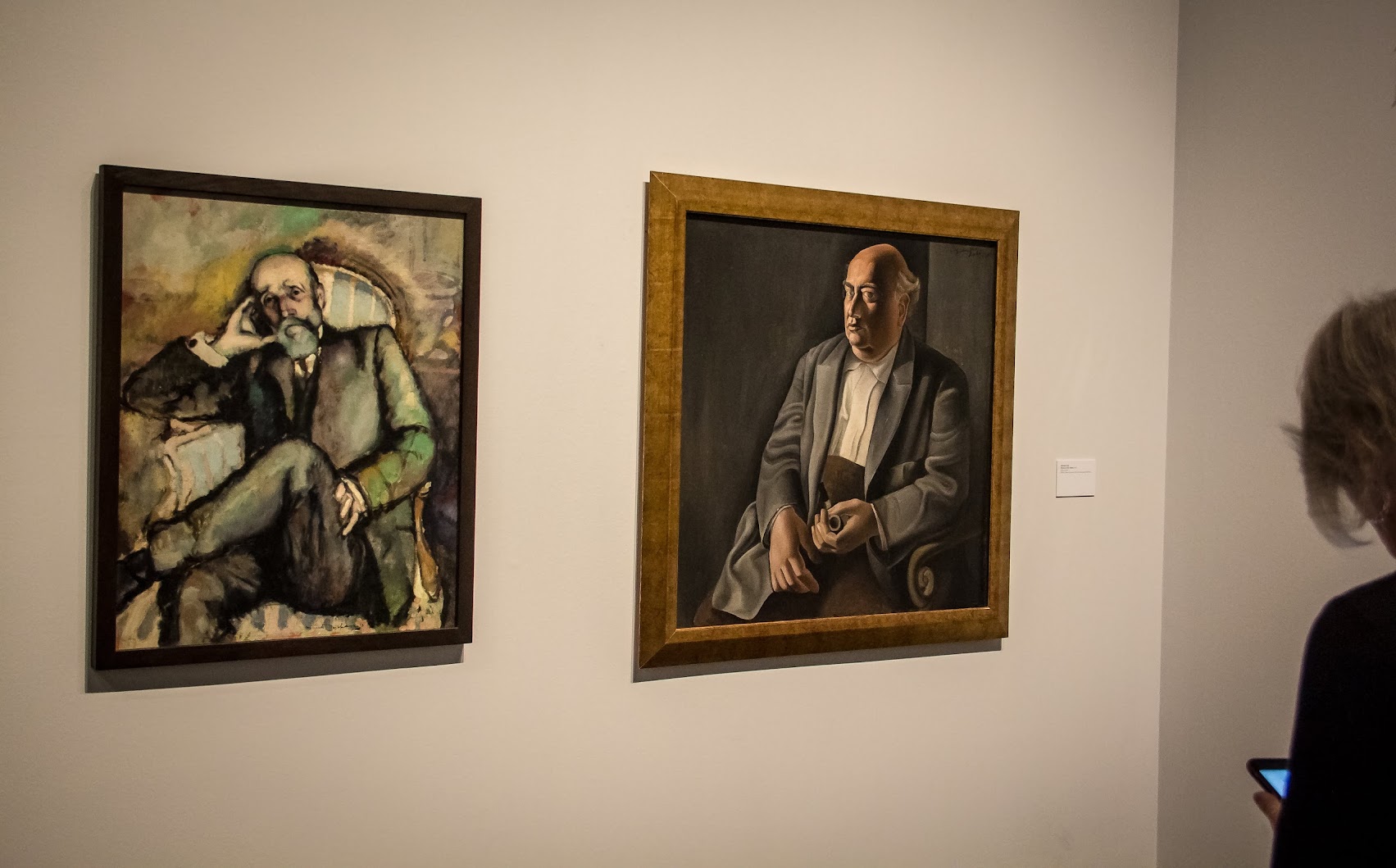 Both Dalí and Duchamp had intimidating fathers who were bureaucrats and traditionalists. Duchamp’s, portrait of his father, left; Dalí, right. Photo: Daniel Veintimilla 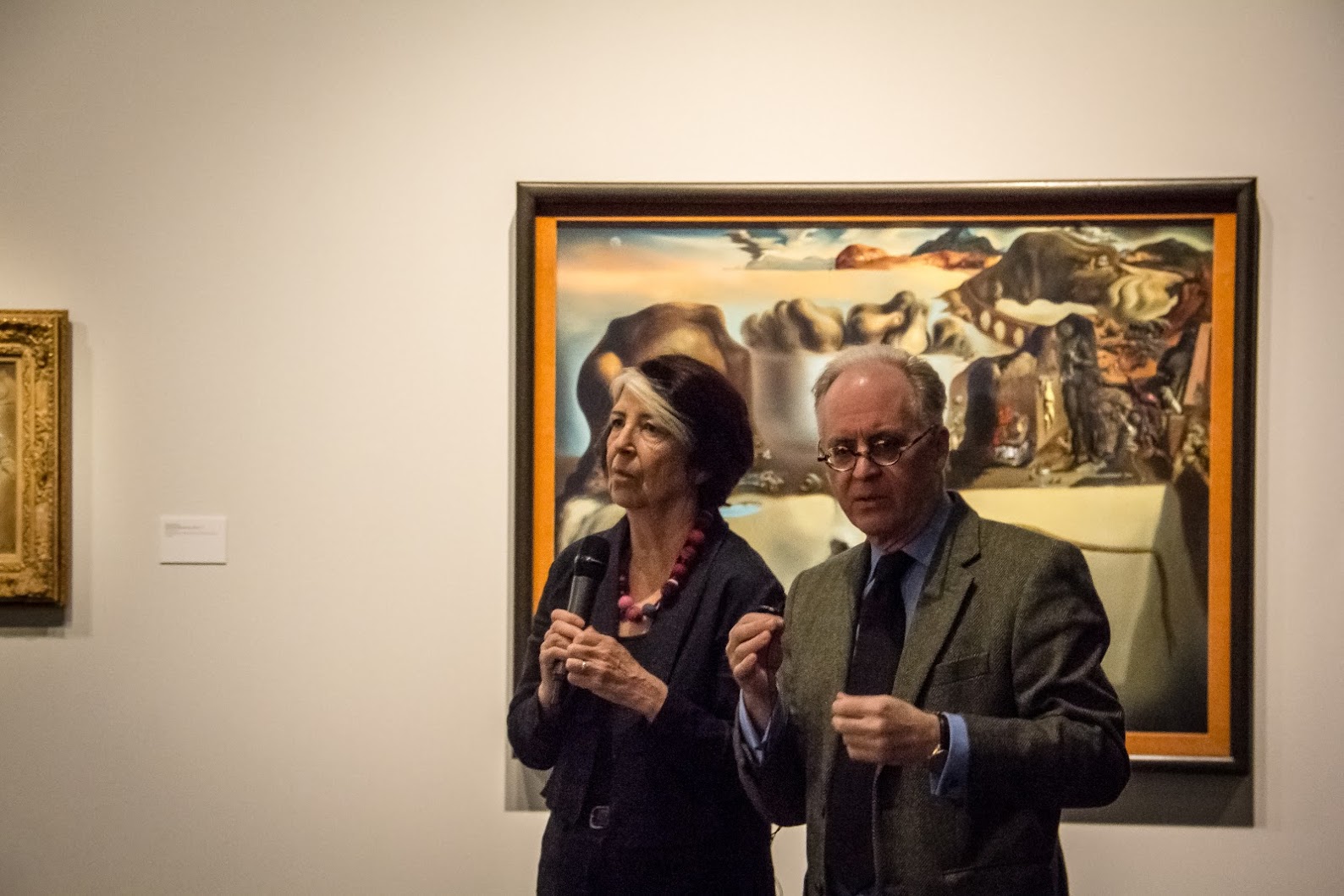 Curators Dawn Adès and William Jeffett in front of “Apparition of Face and Fruit Dish on a Beach” (1938). Photo: Daniel Veintimilla 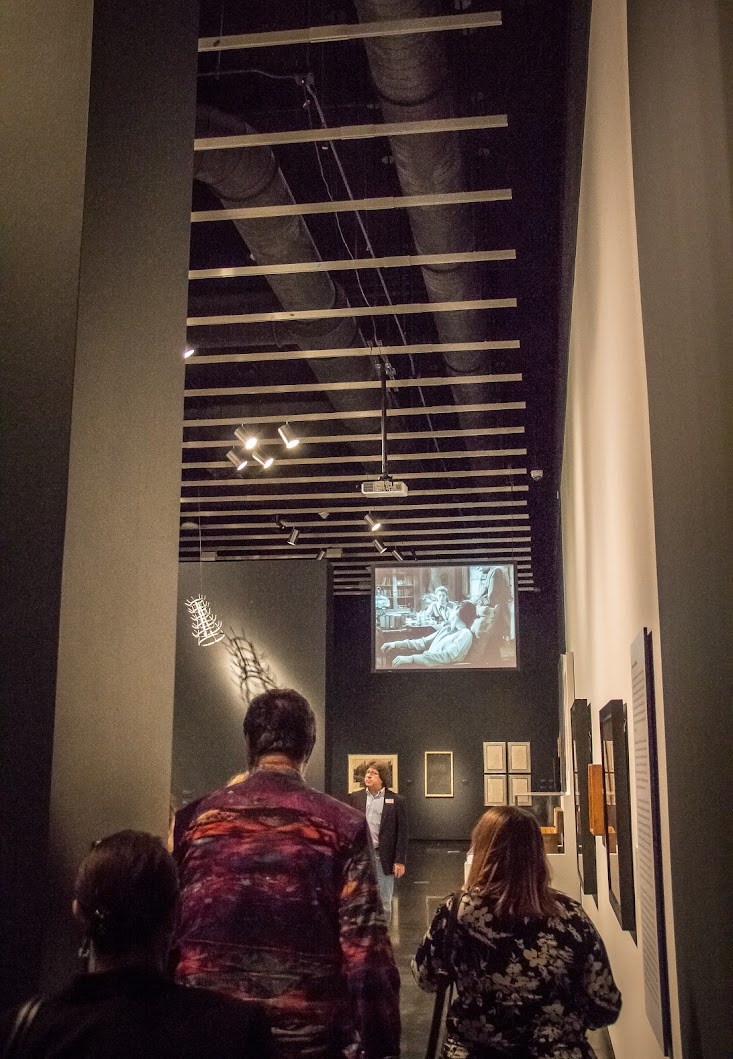 A video installation of the Hitchcock film Spellbound plays on a loop, showing the dream sequence composed by Dalí. as Peter Tush, the museum’s curator of education, observes the Duchamp’s wine bottle rack. Photo: Daniel Veintimilla 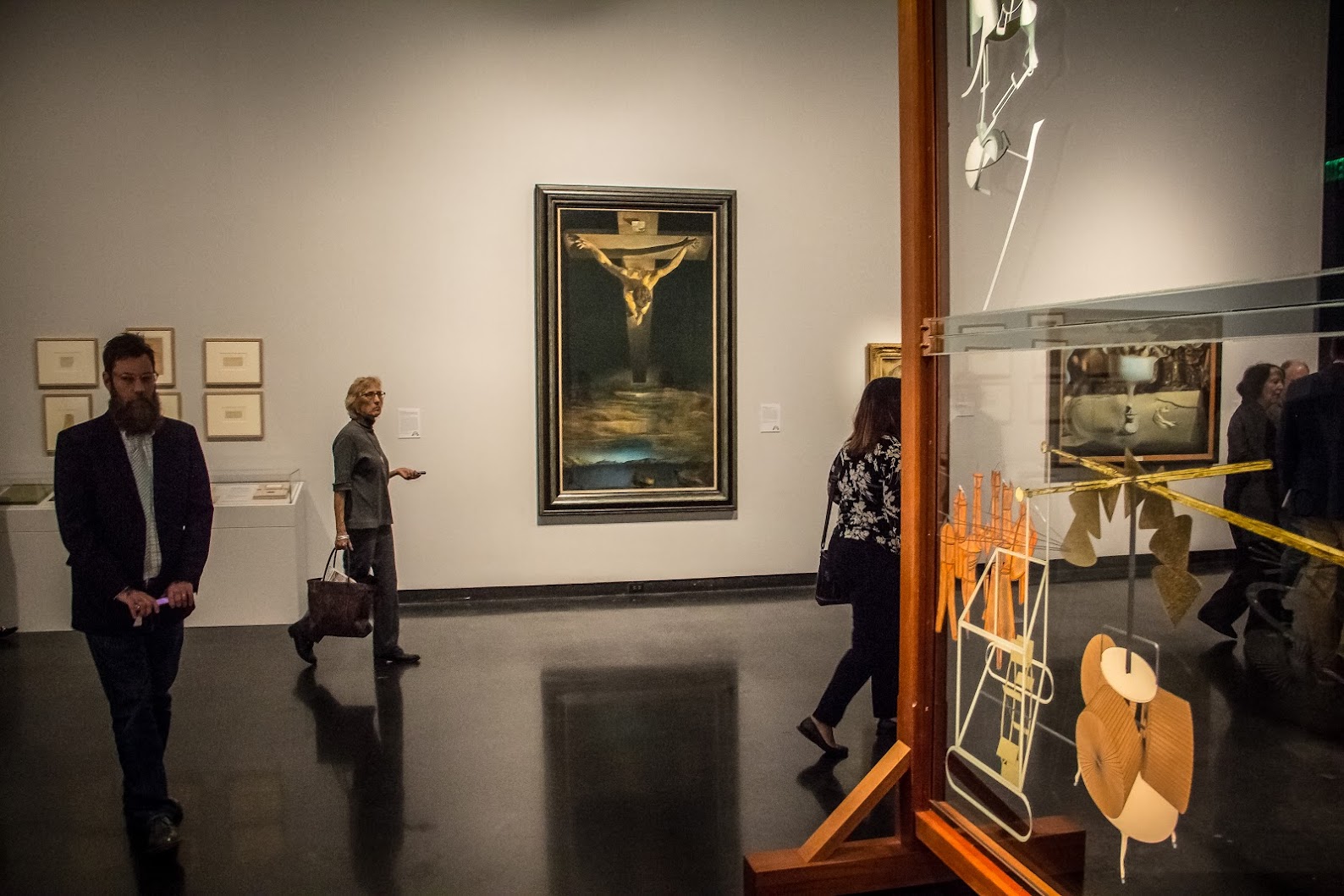 Works in the Science + Religion room include visiting Dalí works not in the permanent collection: “Christ of Saint John of the Cross” (c. and 1951) and “Apparition of Face and Fruit Dish on a Beach” (1938); in the foreground, Duchamp’s “The Bride Stripped Bare by Her Bachelors, Even (The Large Glass).” Photo: Daniel Veintimilla 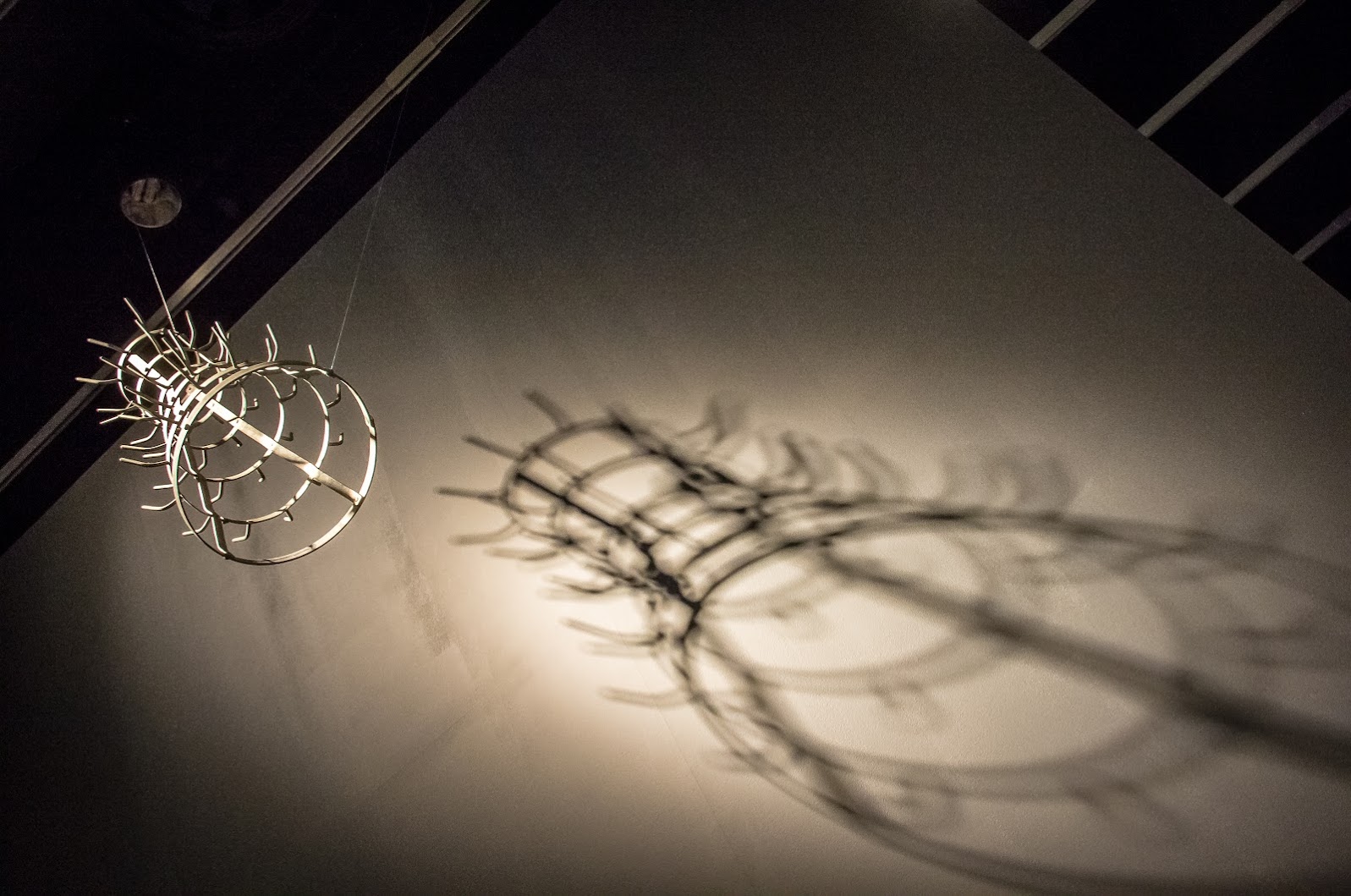 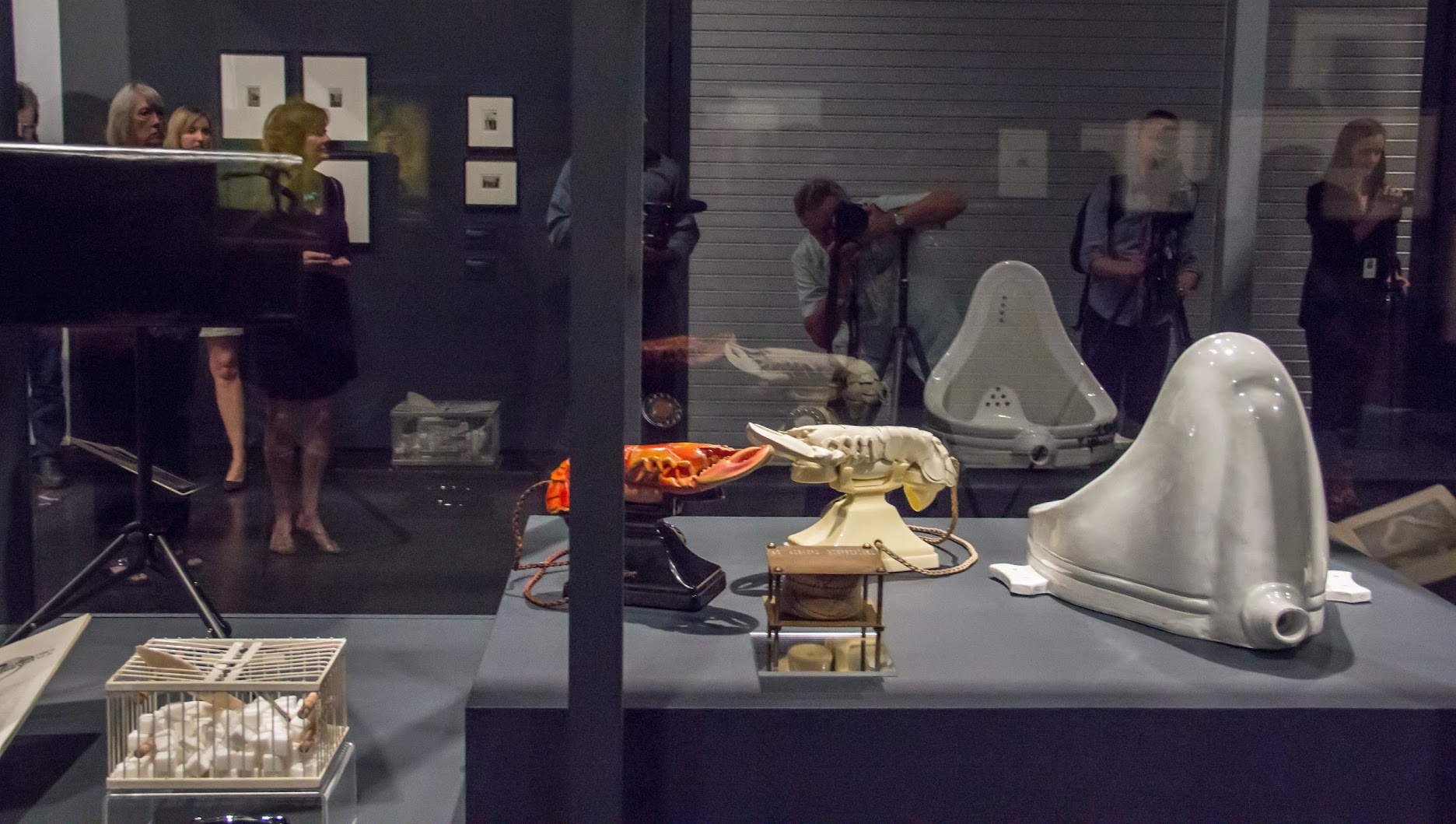 “Apparition of Face and Fruit Dish on a Beach” (1938). Photo: Daniel Veintimilla 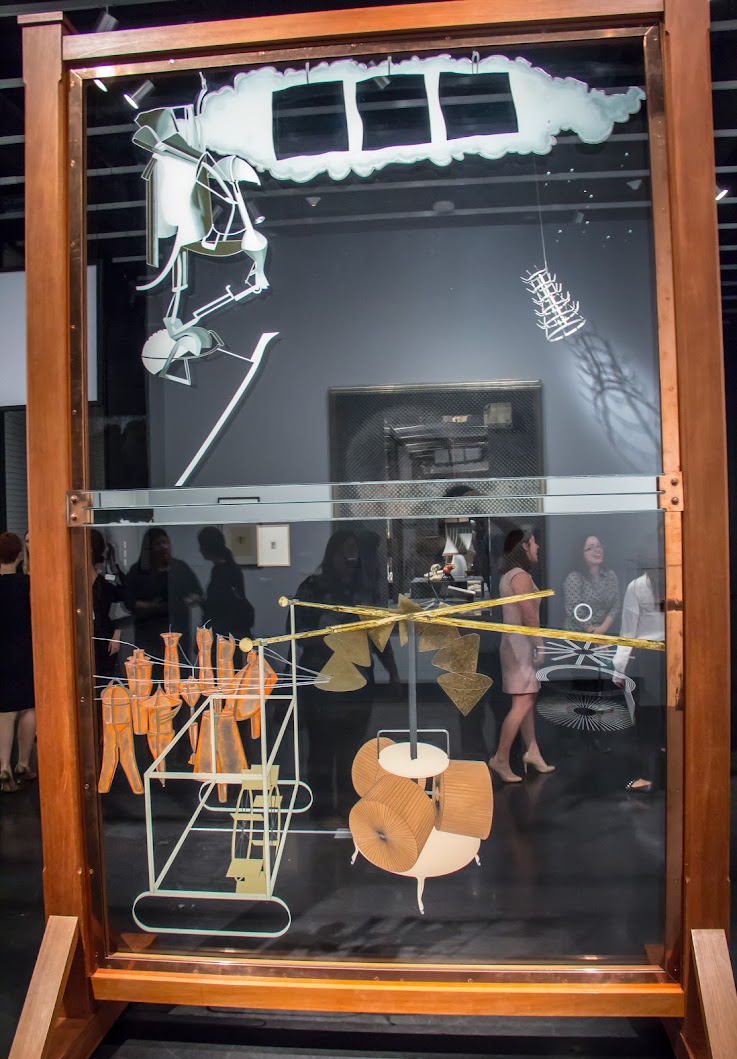 Duchamp’s “The Bride Stripped Bare by Her Bachelors, Even (The Large Glass)” (1915-23). Photo: Daniel Veintimilla 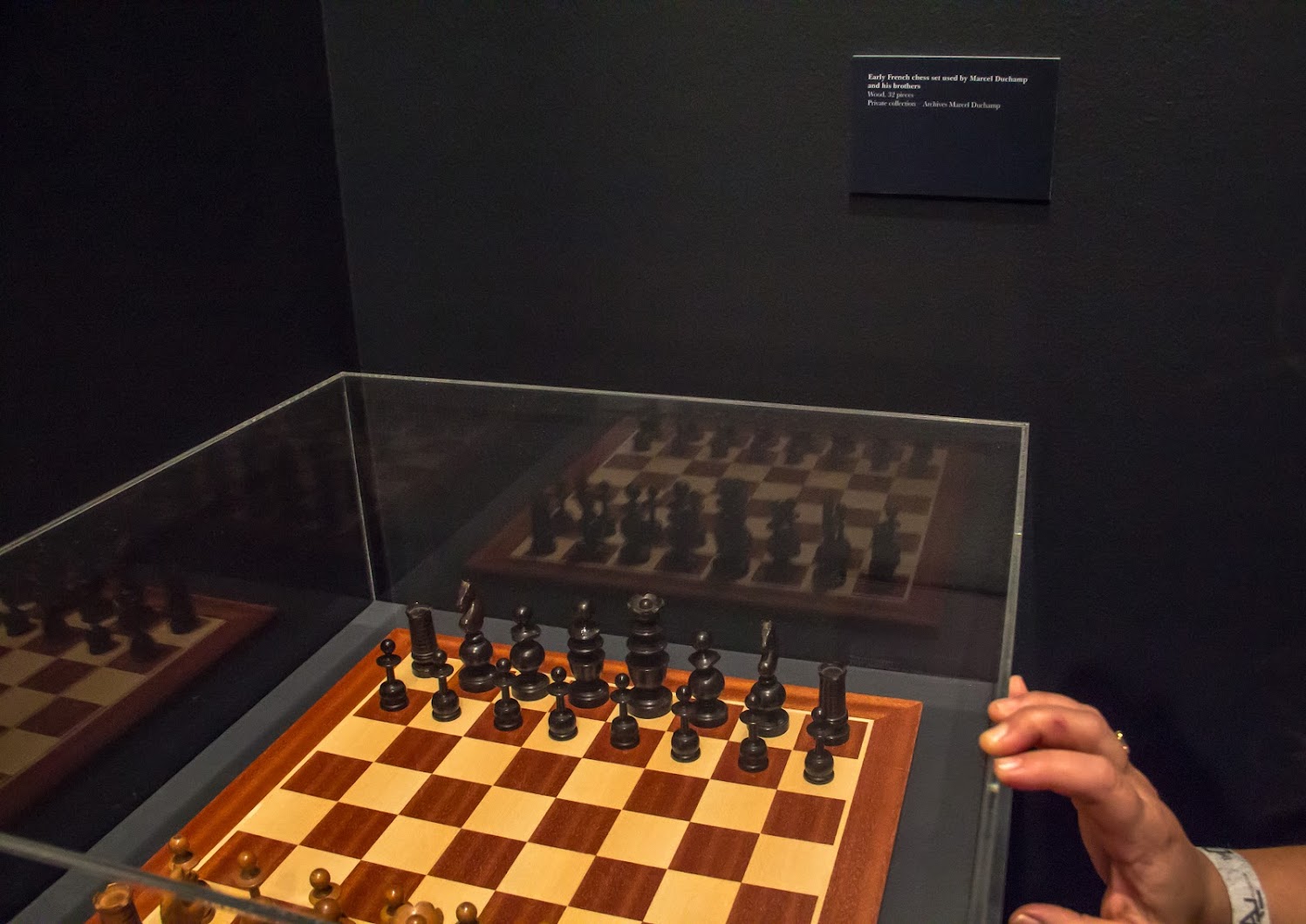 A chessboard owned by Duchamp, who excelled at the game. Photo: Daniel Veintimilla 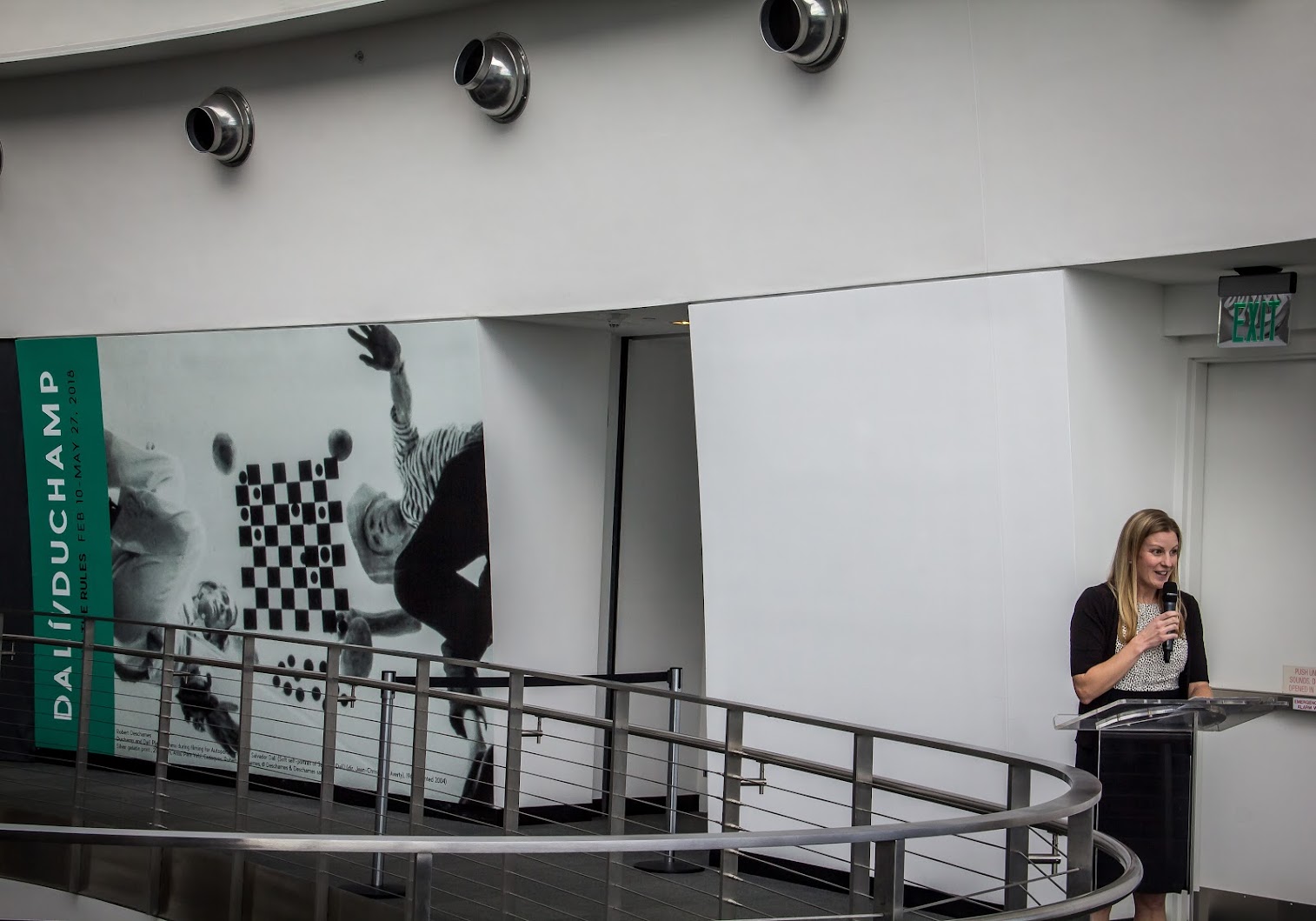 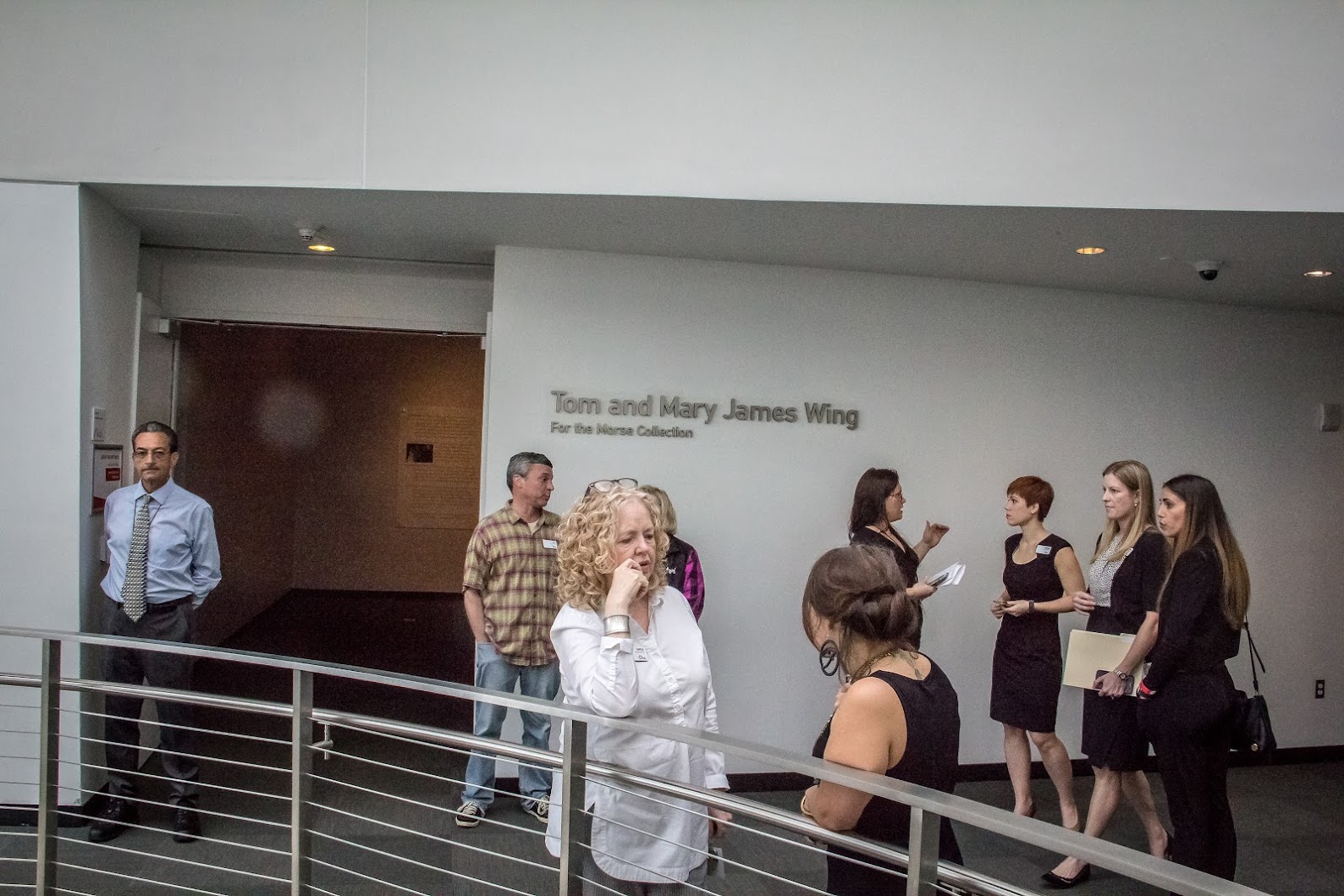