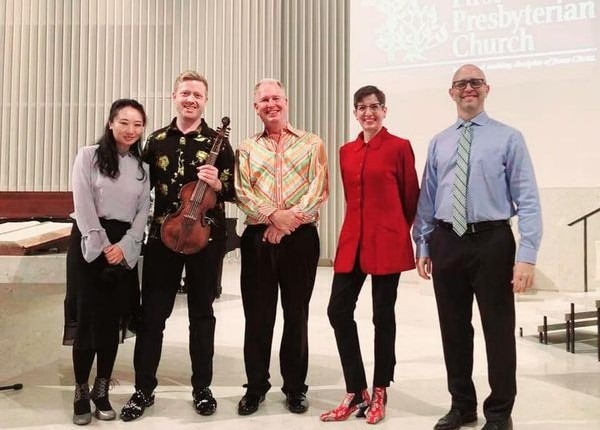 Musicians Go for Baroque
with Historical Instruments and Techniques

. . .
One of my first recordings was a collection of favorites from the Baroque era. You know, Pachelbel’s Canon, Bach’s Air on the G String, a snippet from Vivaldi’s Four Seasons.

I wore out the LP, and got so used to the Berlin Philharmonic’s frothy sonics that I assumed this is how Baroque music sounded back then. Boy, was I wrong.

I soon bought my first historical performance recording, where everyone played instruments of the composer’s time, with odd tunings, gut strings and the rhythmic pulse of a harpsichord. It sounded bright and alive, and by the early 1980s “historically informed’’ performances were all the rage.

If you aren’t familiar with this style, consider a live example when a small band of musicians called St. Pete Baroque offer a program from this magical era.

“We’re dedicated to giving new life to old masterpieces, giving a voice to recently discovered works and bringing audiences the eccentric and improvisatory nature of Baroque music,’’ says Dan Urbanowicz, founder of the group and a violist with the Sarasota Orchestra.
. . .

. . .
The group formed in 2021 with the idea of playing music not heard anywhere else, stuff that resides far outside the repertoire of orchestras and most modern chamber groups. The Baroque era spanned 1600 to 1750 and includes thousands of manuscripts to discover and rediscover.

This makes St. Pete Baroque a sort of “alternative band’’ that specializes in ignored or nearly forgotten material.

Sunday’s program, called La Gamba, includes a wealth of this music. It opens with a fiery partita by Heinrich Biber for two Baroque violins, then a bass viol sonata by Joseph de Boismortier. The musicians continue with G.P. Telemann’s Paris Quartet in B minor, then a viola d’amore sonata by Louis de Caix d’Hervelois. The concert ends with a work by the female composer Lucretia Vizzana, originally composed in the 1600s for four voices.
. . .

. . .
Sarah Shellman, principal second violin with The Florida Orchestra who plays Baroque violin with her chamber colleagues, enjoys the joy and challenge of this rarified literature.

“My interest in historical performances goes back to undergraduate days, and I just loved it,’’ she says. “I think listeners will too. You just have to allow yourself to fall in love with the sounds you’ll hear. It’s an enchanting sound world.’’

Part of the enchantment comes from the instruments themselves. When not playing her modern violin during orchestra concerts, Shellman tunes up a Baroque fiddle with a short, flat fingerboard and sheep gut strings. Her instrument is tuned to A flat instead of the traditional A, at a pitch of 415 vibrations per second instead of the standard 440. This gives it a slightly off-kilter sound.

“And the bow is a little bit different,’’ she adds. “It’s more convex, with a longer tip and weighted differently so it’s not as heavy.’’

Along with Urbanowicz and Shellman, the group consists of Scott Kluksdahl, professor of cello at the University of South Florida, on Baroque cello; Brent Douglas, professor of piano at Eckerd College, on harpsichord and organ; and guest artist Mia Mangano, principal cellist with the Georgia Philharmonic, on bass viol.