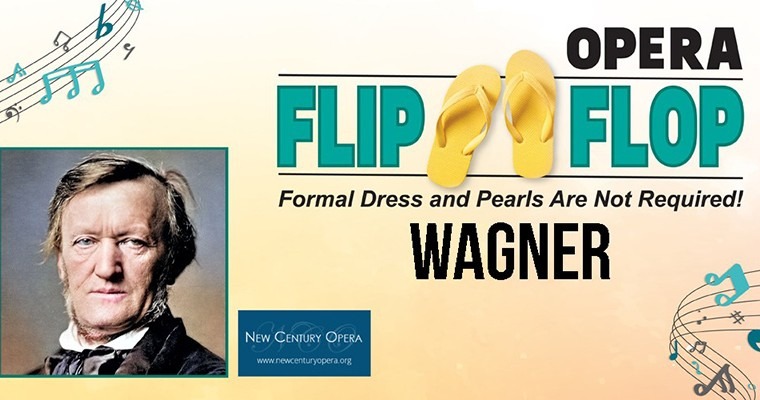 . . .
Opera is supposed to be opulent, but that doesn’t mean you need to don a tux or sequin dress to hear Brünnhilde belt out Ride of the Valkyries.

In fact, why not trade your formals for a T-shirt and beach sandals and relax? Who says opera needs to be so grand all the time? The folks at New Century Opera sure didn’t, because they put on a strictly casual affair with their new series, Flip Flop Opera.

Sunday’s concert features music by Richard Wagner, the great German composer of operas and music dramas. Although most Wagner works are massive in length – some stretching four or even five hours – the company will offer an appetizer rather than an entrée.

“The name Flip Flop Opera came about to subtly communicate that you can ‘come as you are’ and enjoy opera without getting dressed up,’’ she says, adding that the idea is to “give our patrons opera but in an easy to digest format – casual, interesting, inspiring and quick.’’

The concert features music from the Ring Cycle, Flying Dutchman, Tannhauser, Parsifal and Tristan und Isolde. Don’t expect a big production with orchestra, chorus and scenery. Music director Constantine Grame will re-create everything on the piano, chat about the pieces, and introduce New Century Opera vocalists.

“We want people to be comfortable, and certainly not intimidated,’’ he says. “The soloists will be singing, and then I’ll talk a little bit about Wagner, his life and music and what makes him so interesting.’’

Some purists might question whether such short-and-sweet servings of Wagner might cheapen the experience. Grame says it’s just the opposite, and he’ll do the same for an upcoming concert featuring music by Bizet.

“I wouldn’t say it’s abbreviated material as much as a talk-recital, with people hearing Wagner or any other composer along with some friendly discussion,’’ he says.

“It’s really just a way for people to spend an hour out of the house and hear some great music without being intimidated.’’