Changing Kids’ Lives,
One Book at a Time

Every weekend she is pushing children’s books at 833 22nd Street S. in St. Petersburg, along the Deuces corridor. The unmarked storefront during the week is a wellness center called The Well (run by Dr. LaDonna Butler), but on Saturdays and Sundays the space becomes Hollaway’s pop-up multicultural children’s bookstore and gallery called Cultured Books.

Among the books and artwork on display at the pop-up store are paintings and collages kids produced after reading a book. Thanks to the bookstore’s unique program, The Book Report Project (see details in sidebar), kids read a book and then create a book report in any form – from an essay to a piece of art to a podcast – which they can exchange for another book.

The books Hollaway pushes are not just any old books. They are multicultural volumes that empower children to believe in themselves and create a sense of community, books that foster pride by showing positive images and telling inspiring stories about people of color. “To show our children our stories don’t begin with struggle,” says Hollaway who is a mother of three girls ages 2-11, “to broaden world views.”

Every Saturday morning the team hosts a lawn party in front of the bookstore where books are served up with breakfast. On the first Saturday of every month waffles from Pop Goes the Waffle food truck are provided by Deuces Live St. Pete, the advocate organization for the 22nd Street South corridor. 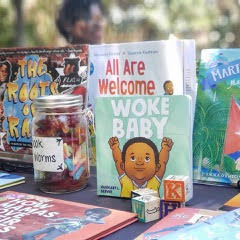 Also pre-pandemic, Cultured Books partnered with The Deuces Live St. Pete to present an International Film Series at the Boys & Girls Clubs of the Suncoast, showing films, bringing books and providing snacks at the historic Royal Theater down the street from the bookstore.

With Tamia Iman Kennedy, founder of Black On The Scene, a production company that guarantees space for Black creatives, Hollaway launched Read About It, a web series that combines books with literary trips in the community.

Books are also part of the Second Sunday at the Deuces pop-up market Cultured Books sponsors every month rain or shine. On a recent rainy Sunday morning vendors Eshay’s Boutique, offering jewelry and clothes, and Amun-Rahs Fragrance Oils were setting up inside. On more sunny days the sidewalks in front of the bookstore are lined with vendors for pop-up sales.

Her resolve to do something began in 2012 after George Zimmerman was acquitted of all charges for shooting Trayvon Martin because he claimed to have felt threatened by the 17-year-old unarmed boy. “Something was not right,” she told herself. The non-guilty verdict “lit a spark in me to do something,” she said, speaking online at CreativeMornings/St. Pete, an organization connecting creative communities in more than 210 cities across the world.

Cultured Books eventually became that something. Born out of protest, the bookstore, and The Cultured Books Literacy Foundation that has grown from it, has aimed to promote positive stories about Black people and people of color. “We are, can and we will be the stars of our stories,” says Hollaway. “We are no longer the token, the afterthought, the sidekick.” 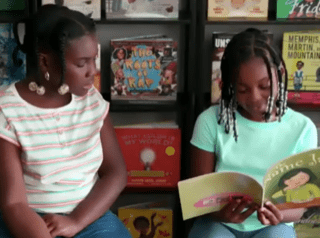 Cultured Books’ The Book Report Project gives kids the chance to create a book report about a book they have read that can be used as currency to purchase another book.

The book reports can be in any form – a traditional written report but also a musical composition, poetry, visual art (a drawing, painting or collage) or a podcast.

Kids fill out a survey, pick a book, read it and when they hand in their report on the book, they can get another one.

When: Every Friday night from 5-7

Where: On the lawn on the Deuces Corner across the street from Cultured Books at 833 22nd Street S.

When: Every Saturday morning

What’s offered: reading and breakfast. Every first Saturday waffles are provided by the Pop Goes the Waffle food truck (underwritten by The Deuces Live, the nonprofit advocate organization for the Deuces corridor)

The average cost of a children’s book is $18.69. Want to help keep the Book Report Project funded? Donate to Cultured Books Literacy Foundation on the Cultured Books website here.

Read About It is an unscripted web series that takes viewers on literary trips around Tampa Bay to promote reading and literacy. It’s co-created by Lorielle Hollaway, owner of Cultured Books, a multicultural children’s pop-up bookstore on the Deuces corridor in St. Petersburg and Tamia Iman Kennedy, founder of Black On The Scene, a production company that guarantees space for Black creatives.
. . .

In the pilot episode — Read About: Art — 11-year-old Nadia and 9-year-old Ava Hardy, two avid readers (and daughters of Hollaway) are inspired by their reading of Kimberly Drew’s book This Is What I Know About Art. The sisters board a bus to seek out art spaces in the Tampa Bay area where they can find Black representation in art.

They meet up with digital artist Nick Davis to see his Black Is Beautiful portrait series, view the murals of YalaFord (who lives in St. Petersburg’s Kenwood district) and tour the Derrick Adams: Buoyant exhibit held last fall at the Museum of Fine Arts.

Produced by Kennedy and directed by Moji Wilson, the pilot is an official selection of the Sunscreen Film Festival in its Web Shorts category. The festival is scheduled to show Read About: Art on Saturday May 1 at 1:15 and on Sunday May 2 at 4:15.

Read About: Art also can be seen on Locally Grown TV on Saturdays at 8 a.m. and 7:40 p.m. You can also rent the film for a 24-hour streaming period on Vimeo for $1.

Ideas for new Read About It episodes include interviewing the Black-owned Force Indy Racing Team to coincide with its appearance at the Grand Prix in St. Petersburg April 23-25, exploring the intersection of hip hop music with local rapper Rod Wave and the Florida Orchestra and talking with Tampa-based Greg Neri, author of the 2011 graphic novel Ghetto Cowboys on Black cowboys, which inspired the recent film Concrete Cowboy starring Idris Elba (now streaming on Netflix). 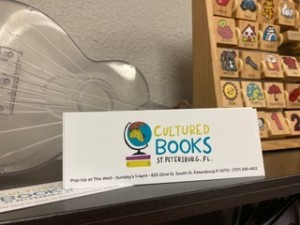 “We have so many episodes in mind but in order to create that, we need your help, your financial support,” Tamia Iman Kennedy says in a video promoting the series at  readaboutitseries.org.

“So help us make this dope show about Black kids reading books while exploring their city,” adds Hollaway. Donations can be made here.