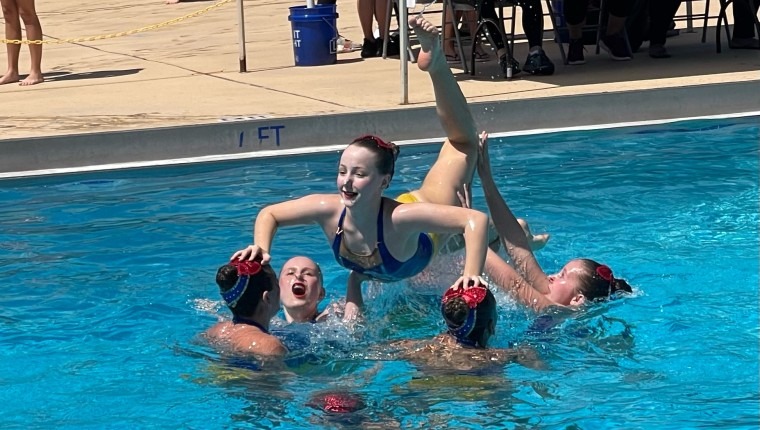 . . .
I step through the side gate to the Southwest Pool, part of the Largo Recreation Center and home of the Suncoast WaterWorks’ Synchronized Swimming team. The club continues to thrive as Pinellas County’s only competitive synchronized swimming program since 1985. The team has been featured in commercials and music videos, and gives a yearly performance open to the public.
. . . . . .
At the deep end under the shadow of the diving platforms, long lines of blue and white lane dividers gently bob along the pool’s surface. Underneath, I watch the team rehearse on land sans water. The young women turn on precise counts, moving as one organism. Bound by gravity, upright and on two feet, it’s akin to witnessing a post-modern gestural dance. The movement doesn’t eat up the space — no major leaps or traveling steps — just tight formations and a laser-focused attention to every count of music.

Other teammates slowly join the fray, eating snacks, slicking hair back to fit under rubber caps, and readying themselves for their nearly three-hour practice. I hear the opening riffs of a Queen song. Arms slice the air with fast, flicking wrists. Freddie Mercury shrills, “Are you satisfied?”

The track stops, then begins again, now accompanied by the sounds of hot debate. Before their coach arrives, some swimmers are quibbling over the counts, their dedication evident. They continue marking out their bearings on dry land before flipping their world upside-down in the water.
. . .

See the Suncoast team in action
. . .
While some of these swimmers have been on the team for years, Assistant Coach Shea Tombrink says that a few joined and fell in love with the sport during the club’s annual summer camps. This year’s week-long camp takes place from July 25-29. Interested novices can also join practices on Mondays and Wednesdays from 5-6 pm for free for the first time. The only requirements are that interested swimmers are comfortable in the deep end and can swim 25 yards.

“Any swimmers that have a dance or gymnastics background usually excel as soon as they get into the water,” says Tombrink. “You can also start synchronized swimming just barely knowing how to swim and do well, too.”
. . . . . .
I was first exposed to the sport of synchronized — now known as artistic — swimming after years of viewing the Summer Olympics. I find myself in good company after taking a seat on the pool’s metal bleachers next to Maribel Avlonitis. She’s there supporting her two daughters — Emma who is competing with the team’s 13-15 year-old advanced group and Bianca who is in the 18-19 year-old advanced group.

“This is one of those sports that is so entertaining, but is not well known,” says Avlonitis, who loves Suncoast’s tight-knit and supportive community of swimmers and parents. “It’s been around for a long time and the USA used to be the best in the world. It’s a sport that requires a lot of discipline, teamwork and making quick decisions when they are in the water to bring out the beauty.”
. . . . . .
It’s a slightly overcast Friday evening, the promise of rain heavy in the air as a light breeze stokes the heat. Both groups will soon take to the water for their penultimate practice before this summer’s U.S. Junior Olympic Championship in Gainesville FL. Tombrink says this is what they’ve been working towards all season.

Over 1,000 young athletes from all over the country go to the week-long meet hosted by the USA Artistic Swimming organization. The inaugural competition was held in 1946, and after 40 years, the Olympics included the sport in their 1984 games with the U.S. winning the first solo and duet Olympic gold medals. Tombrink is bringing both new and veteran swimmers to the competition this year.

“It has been fun to see them come together from so many different backgrounds to make a beautiful routine,” says Tombrink.
. . . . . .
As soon as Tombrink arrives to practice, the swimmers dive into the water for warm-up drills. After a few laps in the lanes, the blue and white dividers disappear and the real, water-treading work begins. A speaker is dropped into the pool so that everyone can hear the pulsing beats and keep time together.

Tombrink is an alumna of the team and grew up dancing before she joined the ranks of synchronized swimmers in fourth grade. Tombrink says her dance training comes in handy when choreographing routines, and she most enjoys the technical side to the sport.

She runs one element in slow motion with the 13-15 year-old team. A metronome-like clapping echoes off the poolside and keeps time while the swimmers slowly bring one leg up into the air, followed by the other. Tombrink films everything, then shows the video playback. It’s like winding up a clock, each leg like a second hand ticking precisely at the same angle lest the illusion of synchronicity is lost.
. . . . . .
Each major element bears an aquatic-themed name — Manta ray, cyclone, barracuda split. Swimmers hover near the surface, catching their breath between sequences. An explosive walkover exchanges legs for arms, and with limbs outstretched, one athlete’s hand trails the water leaving a spray of droplets in its wake. Tombrink emphasizes posture, energy and timing.

My ear is drawn to each percussive splash of water as the swimmers’ legs slap the surface like dolphins’ flukes. In one sequence, cheerleader-esque arms ripple down the line, opening from a V to a T. Stunning images appear then disappear. A star formation. Elbows and wrists joined together in multi-armed waves. These formations are soon replaced by daring feats. One swimmer is launched out of the water and into the air as she flips, head over heels.

As I leave practice, I’m mind-boggled by the endurance demonstrated by these young swimmers who so often hold their breath while achieving the unimaginable. I’m also elated — it’s the collective push from their teammates below the water’s surface that allows each of these young athletes to reach incredible heights.
. . .