A Mystery School for Survivors:

The Art of Missionary Mary Proctor 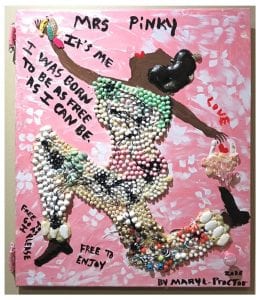 The annual Creative Clay Fest is offering visitors a chance to engage in their own divine as the festival brings renowned folk artist Missionary Mary Proctor to St. Pete, offering two workshops on Saturday, November 9, at 11 a.m. and 2 p.m.

“Folk art” is the name given to work produced by artists who developed their craft outside of the traditional art-school-to-art-gallery paradigm, and whose work combines a wide variety of mediums, techniques and craft artistry.

Other creations sport buttons, baby dolls or action figures, a series of old S& H Green Stamps. She even manages to embed golf clubs and golf balls, old spoons and forks, and well-worn shoes in her paintings. 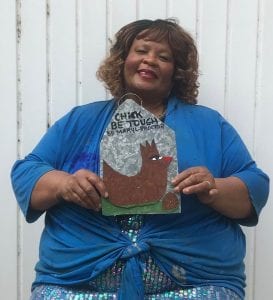 Today, Proctor’s work is in the collections of museums including St. Pete’s own Museum of Fine Arts, the American Visionary Art Museum in Baltimore and NYC’s Metropolitan Museum of Art.  But while she’s spent more than 20 years creating thousands of magical paintings and 3-D art pieces, when she first started, Proctor didn’t even know what she’d been gifted with.

“I didn’t know I was painting. Only reason I had paint was because I was a flea market owner,” shared Proctor in a recent phone interview.

Proctor’s experience is often the case for visual folk artists — many of whom also fall under the category “Outsider Art.” The term refers to those recognized for their genius who are “untrained, unschooled and uninfluenced by the art world,” according to Raw Vision, the international art journal of outsider artists.

“It was Godly inspiration — breaking up plates?” Proctor states. “I’ve never seen nothing like that as art. I wasn’t trained, I didn’t know — I was just looking for things I could use and things I could make a message out of — until the lady came and told me it was folk art.” 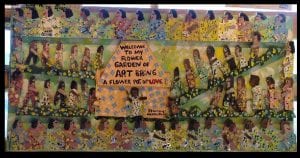 Whether speaking about her work, God, “tuning into good” or her grandmother/angel, Proctor’s voice is at once hypnotic and engaging. The mark of an apostle, it is a voice that beckons you to meet your higher self even amid the most godawful of it all. It is an aural match to the visual play, surprising textures and lyrical language in her paintings.

It allows her to evoke a spiritual transcendence that re-frames the pain beneath the paint with a potent and necessary message for the times: Keep fighting and finding joy in your life.

Proctor recalls the tragic medical accident that ended her nursing career at the tender age of 23 and left her paralyzed and unable to work. With three young sons and her supportive husband Tyrone, she began collecting odds in ends on her large stretch of land outside of Tallahassee. 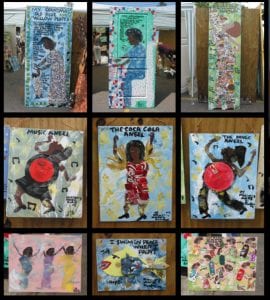 “I decided to continually try to make myself do things in spite of what I was going through. So, I kept working… picking up things, me and my kids. I got a lot of stuff, a lot of objects… and I just started having a flea market, and making myself busy cleaning things, selling things.”

But in 1994, when a fire took the life of her beloved grandmother, an aunt, and an uncle, Proctor says she was again plunged into depression. “My grandmother was like my angel, I could tell her whatever I wanted to tell her, just talk to her. I became depressed and almost devastated.” Her voice loses its laidback singsong-iness, filling with intensity as she explains how painting became her “therapy.”

Proctor relates how one day, after fasting and praying, she looked to the heavens for direction. “I said, ‘Lord, tell me — what is my purpose on this earth?  Why am I here?” As she looked up a light shone down — and she heard a voice say, “Paint.”

Spotting three abandoned doors nearby, Proctor released the spiritual message she was given by God. Painting the doors became the answer to her prayer and fasting, enabling her to channel her grief into art that helped her rise from the devastation. Soon she was not just painting, but something inside her spirit had her breaking plates and gluing them onto the doors — soon she had several doors on display in her yard.

“My yard just got full of all this stuff, painted up. But I didn’t know — I just thought I was listening and remembering my grandma.” But less than six months later, NYC gallery owner Tricia Collins — “the lady” who told Proctor she was an artist — drove by Proctor’s flea market turned art-yard.

Collins saw something more than just painted doors and offered Proctor $500 for each one. Proctor thought Collins was crazy until she returned with the money and took the doors with her. Soon she was commissioned to do more doors.

“I was painting, and it was relieving me of stress. My writing was a part of it, I never want to do anything without writing on it, because I wanted people to know things that my grandmother taught me and said to me. And I didn’t want to pick out anything bad — I wanted to remember the good times we had together,” states Proctor, recalling her earliest work.

As her works become popular, people would approach her and tell her how good her art made them feel — something she could relate to.

“That’s what it does for me — so I bring it to the world. I’ve made thousands of pieces. I’ll meet people from 20 years ago that’ll say, ‘I have this [piece you made] and it still makes me feel good.’” Sharing that feeling with so many she says, is what made her decide to add the word “Missionary” to her name. 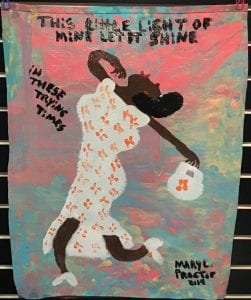 A prolific creator, some of Proctor’s work offers signature subjects — women, mostly in brown tones but some in peachy shades, with their heads thrown backwards as their arms lift to the sky — along with chickens and roosters, flowers, musical men and brightly-dressed women with red lipstick.  Her beloved grandmother’s messages are painted into much of her work, along with Biblical lines, bits of popular culture mixed with old school wisdom and empowering language — all painted across her works in a large, playful scrawl.

Her work is sold at a number of brick and mortar and online galleries, including Antique Galleries of St. Petersburg, Southern Visionary Art, Possum County Folk Art, and Jeanine Taylor Folk Art.

“We are thrilled to have Missionary Mary Proctor return to Creative Clay Fest for her 13th year with us,” shares Kim Dohrman, Creative Clay’s director. “It will be her second time offering back-to-back folk art workshops, including a talk about her process and life as an artist. The last time she held workshops at Creative Clay, it was a full house.”

Proctor is philosophical when she looks at the role art can play during harsh times — like the one we’re in.

“You can’t make everybody want to love. That’s one thing that’s gotta come from within. Some people look at my art, and they go, ‘Oh my God!’ and tears come out of their eyes. And when they get around me, they don’t really see the color. So, what I’m doing is inspiring people to see is that there is no color that makes a difference. And to God, there is no color that makes a difference. But when you get people who want to carry on, you can’t stop them,” Proctor acknowledges. “Some people, you walk in the store and you can feel the hate sometimes. If they could only see the light — if only they could see my art. And the light, to me, is art. To show them the way.”

You can register online at creativeclay.org/creative-clay-fest
for Missionary Mary Proctor’s 11 a.m. or 2 p.m. workshops
during the Creative Clay Fest on Saturday, November 9.

Creative Clay Fest is a celebration of original art and live music
to raise funds for Creative Clay, a community-minded arts center for people with disabilities.