Highlights from
Tenea D. Johnson’s
Conversation on Arts In 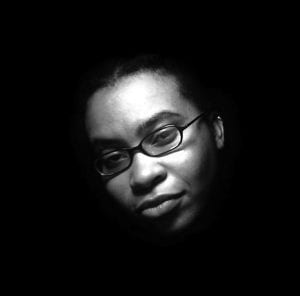 “A lot of people some people read science fiction to escape
the world. I would rather improve the world.”

“One of the things that I really like about speculative fiction
is that it gives you the opportunity to blow something up
and magnify it to such a scale that it’s inescapable.”

On her novel, r/evolution. 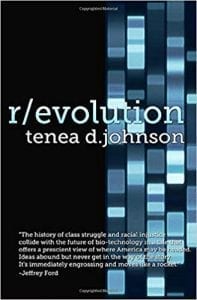 “It’s speculative fiction about genetics and slavery, essentially. It’s a not-so-far future us, where biogenetic adaptations are abundant. Just a consumer product. We can fix your genes, for the next generation.

“But of course, it’s very expensive. So only certain people can afford that. So the world becomes even more unequal than it is now because certain people are essentially evolving away from the rest of humanity, because they have so many more advantages and other people that can’t afford those things.

“It’s not just that they can’t afford them. There’s very little middle class, in that they live in neighborhoods where their health is at risk — environmental racism, right?

“So this brilliant genius comes along. Dr. Ezekiel Carter and he decides to deliver genetic reparations for slavery. So he creates genetics far beyond anyone else’s and then he gives it away. First to poor black people and then eventually just poor people.

“What will happen from what’s begun? What’s the endgame here, if this is the current state? What are the possibilities for where that could go?

“One of the things that I really like about speculative fiction is that it gives you the opportunity to blow something up and magnify it to such a scale that it’s inescapable.”

On what an artist does when everything’s on fire?

“I think you keep working. Because the world needs that work. . .  It’s an inspiration that gets other people moving, but that’s what you have to offer.

“I think for me, in particular, I have also reached a level of frustration where I don’t want to just Inspire — I want to empower. . .  I just want to give people tools for change.”

On her story, Bare.

“It’s a story that I perform a lot and it’s one that I enjoy performing, to see how the audience reacts.

“It’s about exposure and it came from a place where the real and the unreal definitely came together.

“So a woman goes to see her lover perform at a very upscale strip club. And the girlfriend is using the song that the woman identifies as their love song and romantic song.

“And the one who’s removing her clothes takes off her top and reveals herself. And. . . The woman in the audience expected men to be leering at her. . .  And then the woman on the stage starts taking off her skin. And that’s when the men come alive. . .

“She’s confronting her girlfriend, who’s in the audience because she invited the girlfriend. And certainly she is confronting the men. But also, that moment of sort of defining who you are. And she sees it as art.”

“I very much think of stories as somewhat collaborative.
Like I can write, but until you read it and create those images in your mind
or until you listen to it and experience it in that moment, it’s not really activated.”