Tell Me a Story

Eckerd College’s annual Writers in Paradise Writers’ Conference was cancelled due to the pandemic, but the conference is offering two days of live author readings via its YouTube Channel on January 17 and 18. Here’s the lineup:

All readings will be broadcast live on YouTube starting at 6 pm. You may subscribe to the channel ahead of time or simply click on the link just before the start of the reading. The lineup is subject to change. For inquiries, email wip@eckerd.edu.
. . .

The festival includes workshops, storytelling sessions, storytelling concerts and story slams. The workshops cost $25 a piece. All other events are free. Find the schedule here.
. . . 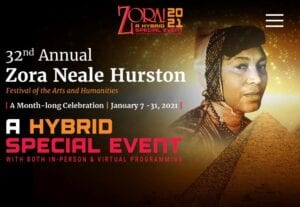 The 32nd annual Zora Neale Hurston Festival of the Arts and Humanities, traditionally held throughout January, is a hybrid festival this year with both virtual events and in-person programming.

There is still time to catch some of the online author events before the festival winds up on January 31, including a two-day conference on Afrofuturism: What Is its Sound?

Held on January 29 and 30, the recordings of this event, will be made available post conference via the ZORA! Festival Academic Conference 2020-2021 Afrofuturism Syllabus.

The keynote, given by Paul Ortiz, University of Florida professor of oral history, is a celebration of the oral stories preserved by Zora Neale Hurston – Oral History, Zora Neale Hurston and the Black Freedom Struggle through Storytelling and Song.

How to join: Register for the event through Tombolo Books’ Google Form and a Zoom link will be sent to you. You can order a signed copy of the book here.

DR. CHARLES B. DEW
January 20
St. Petersburg native Dr. Charles B. Dew discusses his latest book The Making of A Racist: A Southerner Reflects on Family, History, and the Slave Trade.

How to Join: Register through Tombolo Books’ Google Form and a Zoom link will be sent to you. You can also order Dr. Dew’s book here

BEN MONTGOMERY
and JAMES CHAPIN
January 26
Tampa-based journalist Ben Montgomery’s A Shot in the Moonlight: How a Freed Slave and a Confederate Soldier Fought for Justice in the Jim Crow South, the story of George Dinning, the first Black man in America to win damages against a would-be lynch mob, will be out on January 26. Join Montgomery who will celebrate that release with novelist James Chapin, whose debut novel Ride South Until the Sawgrass, set in frontier Florida, came out last October.

How to join: Register through Tombolo Books’ Google Form and a Zoom link will be sent to you. Pre-order your copy of the book here.

When Papa died (I was only 3), my mother stepped in and not only read us stories from our vast collection of children’s books, but also made up ones of her own which involved amazing flights of fancy (“zoom, zoom, zoom on a magic carpet”) and a girl named Mary Ann who could do anything she put her mind to do.

Years later when I was book editor at the St. Petersburg Times, I wrote a column decrying the fact that audiobooks were becoming so popular. Wasn’t it better to read a book than to listen to it? I asked.

Well, the feedback I received from that column made me reconsider my answer to that question. One of the responses came from the daughter of a blind woman who said her mother wanted me to know that she agreed with me that nothing could replace holding a book in your hands, but that listening to books was all that she had left. Another pointed out that literature — especially poetry — was originally orally transmitted. Wasn’t I missing the benefits of hearing a tale?

Yes, I was. I realized I had forgotten the thrill of those bedtime stories — the magic of having a story told to me. I started listening to audiobooks and to my amazement found many of them provided something I couldn’t get just by reading a text.

In David McCullough’s biography Truman, for example, the audiobook included an excerpt from an actual speech by Give ‘Em Hell Harry. You couldn’t get that out of a book. I was hooked. I’ve never abandoned books, but there’s always an audiobook on my reading list.

I’m not alone. The audiobook has continued to be the fastest growing segment in publishing — and thanks to lockdown, interest in them exploded in 2020. Last year sales increased by 16 percent in the U.S., generating over $1.2 billion dollars in revenue. For ages 18 and up, the average number of audiobooks consumed per year went up to 8.1 from 6.8 in 2019.

The pandemic has given us the time and inclination to listen to stories.

In a Washington Post story last August, several authors talked about their willingness to join online book clubs that are discussing one of their books.

“I love to connect with book groups, because it allows me to interact with my readers in a living-room format,” Chris Bohjalian, whose latest book, The Red Lotus, is eerily about a pandemic told the Post. “We talk in a way we never talk at a book signing or speech. It’s far more authentic.”

St. Petersburg native Mary Kay Andrews has also discovered the virtues of meeting her readers online. She had planned a massive book tour to tout her 2020 title Hello Summer which came out in May. But when COVID19 prompted so many cancellations, she launched a Facebook Live channel with fellow writers Patti Callahan Henry, Mary Alice Monroe, Kristy Woodson Harvey and Kristin Harmel.

. . .
The group — which they call ‘Friends & Fiction: Five Bestselling Authors. Endless Stories” — meets every Wednesday at 7 pm to talk with each other and guest authors about books and writing. The interviews are now archived on YouTube with more to come in 2021.

Local festivals — Eckerd College’s Writers in Paradise Readings, the Florida Storytelling Festival and the Zora Neale Hurston Festival — and local bookstore Tombolo Books — which usually feature in-person programming are offering a number of online author events this month (see sidebar), giving us a unique opportunity to listen to our favorite authors and hear stories in the comfort of, well, our living rooms.

“We are storytellers, story listeners and story lovers,”  the association’s website says, summing up our universal love of telling and listening to stories.

“We are people just like you with a story to tell.”