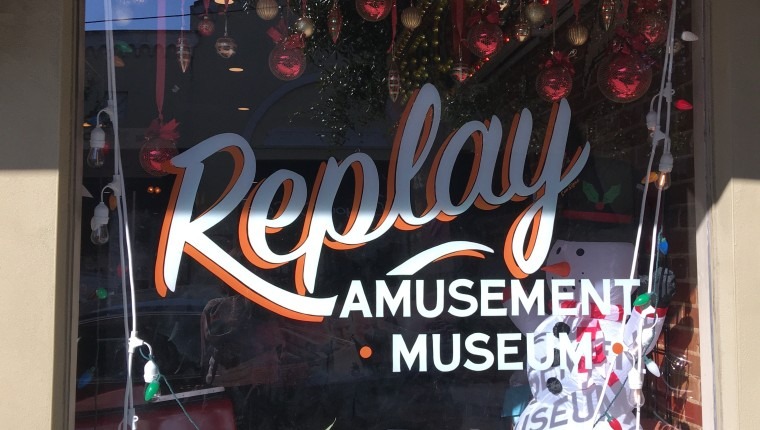 . . .
You can hear an audio version of this story with all the wild gaming sounds here

. . .
. . .
A five-minute drive from Tarpon Springs’ famed sponge docks is the city’s historic district. Home to Tarpon Springs Historical Train Depot Museum, antique shops and restaurants – and nestled between a vintage toy shop and a nightclub, the Replay Amusement Museum.

From the moment you walk in, you are hit with a wall of digital sound, the fierce flapping of flippers on the scores of pinball machines that line the walls – a joyful cacophony of the sounds of play.

In the middle of this maelstrom of people versus machine is Bobbi Douthitt. She works the front desk and organizes events. She also does minor repairs to the machines.

“I started as a customer, and just kept showing up until they’d give me a job,” she says.

If the Replay Amusement Museum shopped around for an ambassador, they would never find one better than Bobbi, a true believer in the delight of games.

“I was a total pinball fanatic. I’ve loved pinball since I was a kid,” she says. Her favorite pinball game? “Black Knight 2000.” She details how she started playing competitive pinball in 2014, before the 2018 resurgence of pinball, which is how she found out about Replay, from a friend.

. . .
The Replay Amusement Museum was founded in 2014 by Brian and Becky Cheaney.

“It was a private collection that they were housing at their home. And they just kept adding machines and kind of felt the growing pains of being like, ‘Okay, what are we doing?’ It seemed a little selfish to them, I think to keep it hidden away from the public and (they) decided to share it with the world,” Douthitt explains.

The Cheaney’s private collection has been augmented with games from other collectors. That includes what is billed as the largest pinball game in the world. It has a pool-ball sized pinball – the “Atari Hercules.”

Now there are about 100 games to play in the museum. “Last time I counted, there were 66 arcade cabinets and 67 pinball machines. It’s spanning 50 years of pinball and 40 years of classic arcade.

“One of our more popular games is “Moonwalker,” starring Michael Jackson. That’s one that I’m always surprised, like, every age, every demographic, whenever anybody goes to Replay – that’s the game that they have to play just because it’s so quirky, and not often seen,” she says. You’ll find “Galaga” and “Miss Pac Man” and Douthitt says families are always drawn to “The Simpsons” game, where the goal is to save baby Maggie.
. . .

. . .
Douthitt says there’s quite the variety of game fans who come to The Replay Museum. “You see people that grew up on these games that you know, remember when they came out and there was a brand-new game on the street that everybody had to put their quarter in. But there’s a huge resurgence of younger generations that are really into retro gaming.” She credits the Nintendo Switch games with fostering a new audience for classic games, like “Mike Tyson’s Punch Out.”

Kenn Edwards and his wife Jenn discovered The Replay Amusement Museum shortly after moving to Florida from Michigan about six months ago. They were looking for a fun spot for their aunt when she came for a visit. Kenn says they fell in love the first day they came. And now they’re regulars. What keeps them coming back?

“The pinball, and the excitement and the lights – it’s just a great environment, and we have so much fun coming here,” he says.

It’s clear that Bobbi Douthitt makes it her business to foster fun for the people who come to the Replay Amusement Museum. She points out a group of young teenagers gathered around a glowing machine, cheering each other on.  It’s the kind of thing she loves to see.
. . .
. . .

The Replay Amusement Museum is at 119 E. Tarpon Avenue in Tarpon Springs
replaymuseum.org