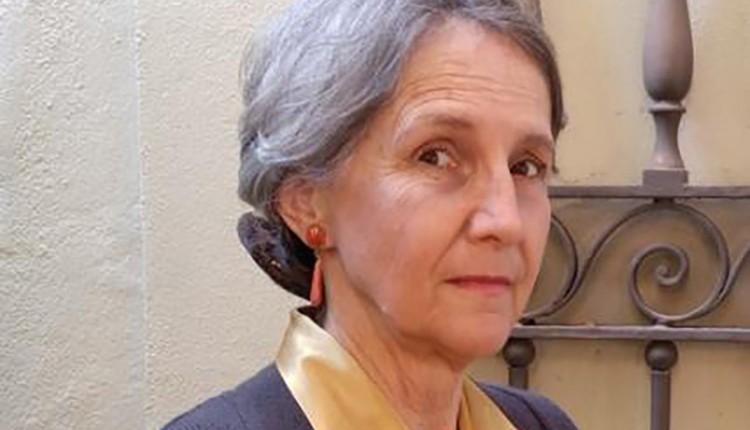 . . .
Nan Colton is a conjurer.  In her remarkable one-woman performances, she conjures up dozens of famous female characters. . . Harriet Beecher Stowe whose book “started” the Civil War. Mina Miller Edison, wife of the inventor. Photographer Berenice Abbott. Or Clio, the Greek muse of history.

In October, she appeared as Agatha Christie, queen of murder mysteries, at the Safety Harbor Library and at the Clearwater Main Library, and as Edith Kermit Roosevelt at Clearwater’s Countryside Library.  In November she portrayed the abstract artist Lee Krasner as part of her monthly Coffee Talks (currently online) at St. Petersburg’s Museum of Fine Arts, where she is performing-artist-in-residence. Eight days later, back at the Countryside Library in Clearwater, she was British novelist Virginia Woolf.

How does she accomplish these magical transformations?

Not by putting on a prosthetic nose or faking a posh English accent as Nicole Kidman did in the film The Hours. (Listen to the one recording of Virginia Woolf’s voice, available on YouTube, to hear how far off Kidman was from the genuine article).
. . .

. . .
Colton’s performances are more subtle. She doesn’t try to slavishly imitate accents. Instead with just a studied tone of voice, a few conscious hand gestures and turns of phrases – and some well-chosen props – Colton makes us believe we are looking at Dora Maar, Picasso’s longtime abused muse and mistress waving her cigarette holder, or artist Georgia O’Keeffe in her iconic black gaucho hat, or the regal Catherine the Great with a crown atop her white wig.

“I don’t do impersonations. I do characterizations,” explains Colton who describes herself as a “playwright, director, storyteller, actress and arts educator” on her Solo Productions website. “The audience has to buy into my performance and then a wonderful communication between us occurs.”

Take that online MFA performance. Colton looks nothing like the craggy-faced Krasner.  But when I peered at my computer screen, there was the Brooklyn-born Krasner, dressed in a shocking pink jacket, sweeping her hands back and forth, telling me about that day in Paris when she learned that her husband, painter Jackson Pollock, had died in a car crash.
. . .

. . .
It was as if the artist was seated just across from me. She explained that a young woman who was in the car with Pollock when he crashed had also died but that his mistress, the woman they had fought over and caused Krasner to flee to France, had survived. She told me how determined she was to work through her grief, that she had moved into the barn where Pollock had his studio. Painting was how she was working through her grief, she said.

Only when I heard Colton say, “Now I am stepping out of my character,” was the spell broken. For nearly 45 minutes Colton had become Krasner but now the storyteller was talking in her own clipped cadence and lilting accent from her native South Africa. Krasner had disappeared.
. . .

. . .
As part of the post-show’s “questions and answers with the audience” segment, Colton put on a slide-show with photographs of the real Krasner — black-and-white snapshots with the artist posing with Pollock, shots of Krasner painting in her studio. In one, a colored portrait, she’s wearing the shocking pink jacket which had inspired Colton’s choice of costume.

Colton called her talk Re-Echo in honor of the Krasner painting by that name currently on view at the Museum of Fine Arts through February 2022, on loan from the Art Bridges Foundation. Painted in 1957, Re-Echo is part of Krasner’s monumental Earth Green series, 17 paintings that were completed after the death of Pollock in that 1956 crash.
. . .

. . .
Katherine Pill, the MFA’s Curator of Contemporary Art, describes the piece as “a stunning, pivotal work that epitomizes emotive gesture and form” and one that serves as a reminder that “the male-dominated narrative of Abstract Expressionism still crucially needs to be expanded.”

Colton, who has performed and lectured professionally on stages throughout South Africa, Great Britain and the United States, launched Solo Productions in 1998 when she began her gig as the performing-artist-in-residence at the MFA. The museum commissioned her that year to portray Catherine the Great as part of the MFA’s Russian exhibit. She has offered her one-woman portrayals at the museum’s monthly Coffee Talks ever since.
. . .

. . .
Expanding her reach to corporate events, libraries, schools, universities and retirement communities, Colton currently has more than 45 characters at the ready, but for an additional fee she will develop a new character and script for clients. One of her completed scripts has yet to be performed. She was all set to go when her show was cancelled due to COVID. “But who knows,” says Colton, “Sarah Bernhardt’s Visit to Tampa Bay may have an appearance sometime in the future. The costume is ready!”
. . .

. . .
At the start of Colton’s research, all of her subjects pose “challenges or hurdles” for her to overcome, but who has been the most difficult to develop? “For me, that has been Frida Kahlo,” says Colton. Colton was impressed with Salma Hayek’s Academy Award-nominated portrayal of the Mexican artist in the film Frida (“She is simply marvelous to watch”), but her own immersion into Frida’s dynamics left her exhausted. “At the end of her life Frida was filled with both physical and emotional pain muted by drugs and alcohol,” says Colton, “and this is a very dark place to visit.”

Her most enjoyable character to portray? “The one requested and being portrayed that day,” Colton insists.
. . .

. . .
In her online MFA presentation, Colton urged us to go to the museum and see Re-Echo for ourselves – to stand on a white dot in front of the painting where you can hear a recording of Krasner’s own voice discussing the work. Krasner made the recording as she was preparing for an exhibition and the public unveiling of Re-Echo and the other works in the series.

Listening to Krasner in her own words is mesmerizing. (You can also hear Krasner here in a YouTube segment online entitled In Her Own Words – “I think all painting is biographical,” Krasner entones in her unmistakable Brooklyn accent).

Standing on that white dot, I thought of the voices of all the creative women Colton has brought to life and realized that she adds one more ingredient when she conjures them up in her performances – the power of empathy. Colton really cares about these women and their lives — and it shows.

It is the secret power of all storytellers.
. . .

WINTER TALES at the MFA in St. Petersburg

Taking on the role of The Narrator, Colton tells stories about pieces of art depicting the holiday season currently on exhibit at the Museum of Fine Arts, St. Petersburg. More here or call 727-896-2667.

Colton portrays the woman who sustained Anne Frank and her family in hiding during World War II. If not for the humanitarian actions of Miep Gies (1909-1999) in Nazi-occupied Leiden, the world would never have met Anne Frank. The performance is Pass-A-Grille Community Church’s annual fundraising event. More here or call 727-360-5508.