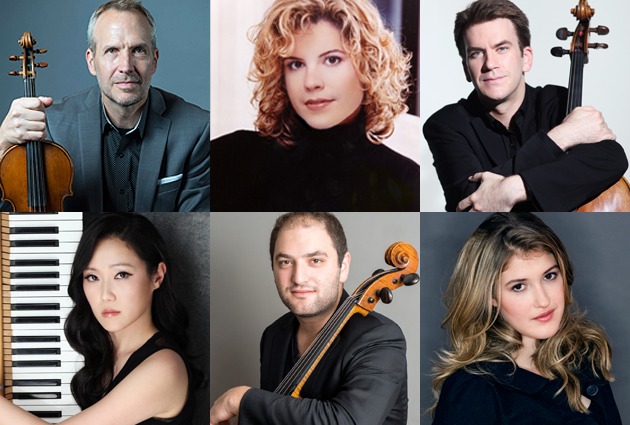 If you want a whisper, listen to chamber music.

Intimacy is, after all, the point of a small group of classical musicians delving into a piano quintet, string quartet, trio, duo or solo sonata. This is where an otherwise private door opens to a composer’s inner journey and – unlike an orchestra, no player can hide. Every note is bare and exposed, every error obvious, every melody a personal message to the audience.

Bay area listeners have few better chances to embrace this artform than with the Palladium Chamber Players, who open their new six-concert season December 8 at the namesake Palladium Theater in St. Petersburg.
. . .

. . .
The core group returns again this year, including violinist and artistic director Jeffrey Multer, who also serves as concertmaster of The Florida Orchestra. . . violist Danielle Farina. . . cellists Edward Arron and Julian Schwartz. . . and pianists Jeewon Park and Marika Bournaki. Within this ensemble is the smaller Mile-End Trio, led by Multer, who also designed the season’s programs.

The playbill is loaded with high-caliber material, dynamic and seldom-heard works for adventurous ears along with meat-and-potatoes repertoire to appeal to more restrained tastes. The highpoint of the series likely will be a guest appearance by the renowned Juilliard String Quartet in a night no chamber fan will want to miss.

“It feels so great to have the Palladium Chamber Players returning to our stage,’’ says Paul Wilborn, executive director of the theater, who budgeted $90,000 for the season. “I love the programs Jeff has put together and I was so excited to book the Juilliard. I’m very proud that we’ve been able to create a world-class chamber series here at the Palladium.’’
. . .

. . .
The season opens with two substantial works, Franz Schubert’s Piano Trio No. 1 in B-flat Major, and Anton Arensky’s Piano Trio No. 1 in D minor. “It’s his best-known piece of chamber music,’’ Multer says of the Arensky. “It’s magnificent, and such a contrast to the Schubert. It’s passionate and romantic and heart-on-your-sleeve, but without being cheesy.’’

In March, the musicians perform Ludwig van Beethoven’s String Trio in G Major, No. 1, which served as a springboard to the composer’s masterful string quartets that would follow. Then comes a rarity in Rebecca Clarke’s Viola Sonata of 1919. Clarke, by the way, was among the first women to play in the male-dominated world of the professional orchestra. “This is a wonderful piece,’’ says Multer. “It’s incredibly strong music – a tour de force.’’
. . .

. . .
The musicians devote the second half to Antonin Dvořak’s 35-minute Piano Quartet No. 2 in E-flat Major, which he wrote in three weeks in the summer of 1889, seemingly without effort.

For the season’s centerpiece in mid-March, the visiting Juilliard ensemble includes violinists Areta Zhulla and Ronald Copes. . . violist Roger Tapping, and cellist Astrid Schween. This marvelous program opens with Felix Mendelssohn’s searing String Quartet No. 6 in F Minor, his last completed work, which he wrote following the death of his beloved sister, Fanny. Unlike the composer’s trademark ebullience, this is music of darkness, a study in anguish and despair. “It’s one of his finest works,’’ adds Multer, “as profound and deep as it gets.’’
. . . . . .
Next up is a rarely performed gem – Eleanor Alberga’s String Quartet No. 2, written in 1994 and cast in a single movement. The Jamaican-born composer shows the influence of Bartok and Shostakovich, but she’s an artist with a unique voice who isn’t afraid to challenge listeners. After intermission, the Juilliard performs Maurice Ravel’s lustrous String Quartet in F Major, known for its dreamy atmosphere and masterful interplay of light and shade.
. . .

. . .
April brings another special concert – Natalie Hoe, principal clarinet with The Florida Orchestra, performs Mozart’s Clarinet Quintet in A major. If you’ve never heard this enchanting score, you owe it to yourself let it into your life. “Mozart is a true master, essentially creating a condensed chamber opera full of character, drama and beauty,’’ Hoe says. “It’s truly a magical experience as you go on this journey with just five instruments weaving a tale… What I love about this quintet is that each part takes turns in playing an important role.’’

Francis Poulenc’s perky Clarinet Sonata follows, a piece commissioned in 1962 by Benny Goodman. Then comes Johannes Brahms’ Piano Quintet in F Minor, known as the “crown’’ of the composer’s chamber works because of its unity, driving passion and formal control.
. . .

. . .
The final concert in May highlights works for cello and piano, starting off with Mendelssohn’s Variations Concertantes, a set of eight variations written for the composer’s younger brother, Paul. Next up is Manuel de Falla’s six-movement Suite Populaire Espagnole, followed by Schubert’s Sonata in A Minor, known as the Arpeggione. Schubert is the only major composer to have written for the now-forgotten arpeggione, a cross between a guitar and cello, which fell out of favor shortly after its invention.

The season ends with Sergei Rachmaninoff’s deeply personal Cello Sonata in G Minor, music that serves as a microcosm of Rachmaninoff’s trademark style – an atmosphere of melancholy and nostalgia, soaring melodies that touch on pathos, and deep color palettes for both cello and piano.