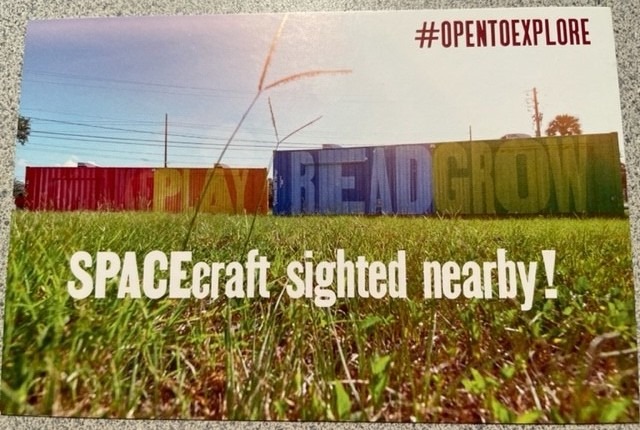 Is it a bird? Is it a plane?
No. It’s SPACEcraft, a Traveling Art Project!

. . .
You hear the words SPACEcraft and perhaps realize you don’t have a clue what it means. It’s a play on words. It’s fun.

And it’s not just for kids.

It is the brainchild of three well-known community art activists, Carrie Boucher, Mitzi Gordon and Bridget Elmer, who strongly believe that art is for everyone. And thanks to a grant from Creative Pinellas and the Pinellas County Board of County Commissioners, they bring it almost right to your doorstep.

SPACEcraft landed in Pinellas County right about the time COVID-19 hit the country, which might be one of the reasons why it’s still a mystery.* The mobile art project has been traveling throughout Pinellas County since August 2020 via two shipping containers (I’d describe them as “art pods”) offering four open-air sessions each week.

The pods are currently in temporary residence at the North Greenwood Rec Center in Clearwater and at Highlander Park in Dunedin. The sliding doors will close at the end of December. . . or maybe not. There are tentative plans for a week-long celebration marking the end of SPACEcraft’s deployment and possibly a move to a semi-permanent location.

“It’s been a magical journey,” says Mitzi Gordon. “It’s amazing to me how much we have learned in the many places we got to visit. Right now, we’re entering a transition period. We’re thinking of ways to keep the program active.” The trio is also working on a book about SPACEcraft, their inspiration and their experiences.

“We’ve all been active in social engagement of the arts,” Gordon explains. “There’s always a little element of surprise. . . we create an environment intended to facilitate but you don’t really know what happens until you open the doors.”

SPACEcraft was designed for first-hand interactions in a calming, relaxed and not intimidating art space. She says the program has evolved with the involvement of more than 50 people, including facilitators, established and emerging artists, musicians, educators, writers and partner creatives who live throughout Pinellas County.

Activities have changed with every location as facilitators meet community artists and incorporate them into the neighborhood’s program. And as the art pods travel, “they continue to cross pollinate the county with our creative community,” she adds.

Gordon is adamant that SPACEcraft is not just for kids.

“The concept is to bring all ages together, have them forget about ‘the rules’ about art and ‘artist with a capital A’ and show that every human has the potential to be creative,” she adds.

“Art is an essential part of being human,” she says with a laugh. “Our objective was to create social engagement, create an active experience for the public.”

SPACEcraft is an acronym for “Social Practice Activating Creative Environments.” The program’s name is a mouthful and a play on words. Space – Designating a place or community. Craft – Meaning art, the tactile, the hands-on experience.
. . .

READ Space – The literary arts. Poetry reading and writing such as “Black Out Poetry” where you take a damaged book, turn to a page, black out words and then create a poem with the words still on the page. The book also becomes a piece of visual art.

The day I showed up at Highlander Park last month, fittingly, I learned about the Moon, the Moon landing and the phases of the Moon with 3 ½-year-old Georgia Halasz and her mom Vanessa. Stacey Diaz, a former public elementary school science teacher, led the afternoon of one-on-one activity seated at a table outside the SPACEcraft container.

The Moon is drifting away from the Earth.

The dark side of the Moon is a myth.

A person would weigh much less on the Moon.

During the hands-on activity, Georgia, her mom and other families learned about the phases of the Moon and created a model from a paper plate.

Inside the shipping container, Mitzi Gordon was straightening up the art space and clearing out unwanted critters – ants that had wandered by and decided to stay. Outside, facilitator Emily checked on those at the tables and the supply of water and snacks provided to attendees.

At another table, Chris Krampert and his two daughters Caroline and Charlotte and their friend Coral Taylor assembled a puzzle with constellations.

Krampert says they’ve attended and enjoyed other SPACEcraft events. “I had a lot of fun playing at the drum circle and playing the other musical instruments,” he explains with a chuckle.

Around the corner at another table, 79-year-old Elsa Larrea with her husband and daughter Betty, relaxed and chatted while Mrs. Larrea finished coloring a picture. The day out with family was considered a treat since she had suffered a stroke last year and, most recently, was recovering from a broken hip.

They came to one of the first SPACEcraft events originally for her 4-year-old granddaughter Cadenze (coincidentally it was one of our “Two Happy Ukers” performances!) and found it a “beautiful” family experience. And they’ve kept going to SPACEcraft, traveling with it to the different locations for the opportunity to learn and share creative times with others.

Betty Larrera, an author, has written a children’s book Lucinda’s Magical Yoga Adventures. She’s been invited to read her book at a future SPACEcraft.

. . .
*My ukulele group at the time, Three Happy Ukers, had offered to perform to celebrate SPACEcraft’s launch in March 2020. With the pandemic, it didn’t happen. Eventually, my husband and I, Two Happy Ukers, were booked to play at a few of the early events, singalongs and ukulele playalongs, at John Chestnut Park in Palm Harbor, Oldsmar City Hall and Highlander Park in Dunedin.