Sheléa Comes to the Capitol Theatre

Performing artist Sheléa is bringing her massive talent to the Capitol Theatre, Thurs. Feb. 23. Joining her is former New York Yankee now jazz musician Bernie Williams for a double bill that is sure to entertain.

Though Sheléa is not necessarily a household name, she is headed that way. The 39-year-old’s career has been a slow burn but the flames are big, and so are the people in her corner.

After graduating from Alabama’s Oakwood University, Sheléa moved back to her home state of California and started working with Janet Jackson’s right hand producers Jimmy Jam and Terry Lewis.

She soon lent her vocals to many movie soundtracks including Jumping the Broom and Akeelah and the Bee.

Stevie Wonder heard her vocals on “Someone to Watch Over Me” with fellow OU alums Take 6 and took heed.


Sheléa backed him on his Songs in the Key of Life tour.

Thanks to Wonder, she also got to perform for the Obamas, twice.


Like a lot of modern artists, Shelea got attention from a Youtube video that she posted as a tribute after Whitney Houston’s death.
It led her to perform a greatest hits of sorts at the Whitney Houston Grammy Museum book release party for Whitney Houston: The Voice, the Music, the Inspiration, at the request of author Narada Michael Walden.

After collaborating on a song together Walden, as well as Wonder, assisted on Shelea’s debut album Love Fell On Me.

Quincy Jones is the latest major player to lend his clout to her career. He has taken Sheléa on as his protege — and that title alone should sell out shows.

In 2019, the special  Quincy Jones Presents: Sheléa premiered on PBS — showing a wider audience her talent.


Sheléa is now a major player in her own right — a piano player, producer, songwriter and now actress.

She plays Dorinda Clark-Cole in the upcoming Lifetime biopic The Clark Sisters: the First Ladies of Gospel — which seems like a perfect fit, as she grew up in a religious home. 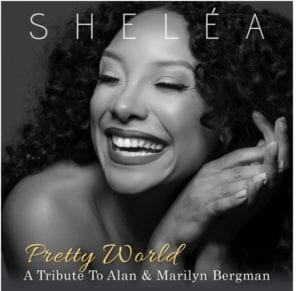 Sheléa’s latest album Pretty World: Through the Eyes of Alan and Marilyn Bergman celebrates a couple who have written some of the most celebrated and memorable lyrics in cinema — including the heartbreaking “The Way We Were.”

The Bergmans also worked with Quincy Jones, providing lyrics for Jones’ music in 1967’s Sidney Poitier hit film, In the Heat of the Night.

All of Sheléa’s talent will be hard to contain in the Capitol Theatre, and it should prove to be a night that’s talked about for years.