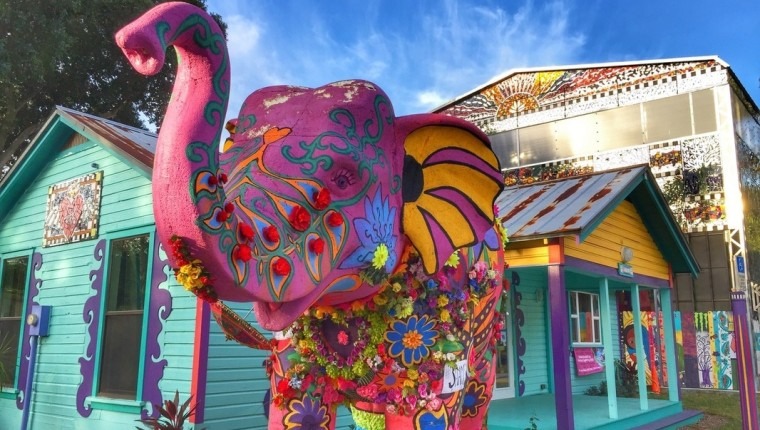 . . .
Before retirement, Walt Belcher’s career was centered in storytelling. He started as a reporter in South Carolina and later, a columnist for the Tampa Tribune.

“I’d been writing other people’s true stories for years as a reporter,” Walt says. “Then, about four years ago, I went to a prompt night at SHAMc.”

That Safety Harbor Art and Music Center event was called InPrompt2 and participants were given a writing prompt and a month to write a story, poem, song, skit – anything, as long as the prompt was used in some way.

Walt went to the mic and read what he’d written. Sandi Sylver was in the audience. She was a well-known puppeteer and storyteller and she made a point to approach him after the event. “She told me I should be telling that story instead of reading it,” he says. “She gave me some names like Bil Lepp and Andy Irwin. I found them on YouTube and I thought, I’m going to try that.”

Soon, the art of storytelling — a different kind than he was used to — became not only a hobby, but a passion. Walt met fellow storyteller Maureen Belote, whose Irish roots give her plenty of seeds from which to grow her trademark Celtic tales. Both attend festivals throughout the country. Both have won or placed in the top three in many story slams and competitions.

Maureen sometimes hosts storytelling events in her home. “I was introduced to storytelling in the late ‘90s. Before that I was working as a clown,” she says, “but I wasn’t a very good face painter or balloon twister.” She credits her childhood and her family to her love of storytelling. “My father grew up in Ireland, does that say enough?”
. . .

. . .
The storytelling circuit is a tight-knit group who gather and entertain each other and the public and sometimes offer workshops. “There was a festival in Atlanta in 2018,” Walt says. “Andy Offutt Irwin was one of the first professional storytellers I met.”

Thanks to having a sister here, Irwin is a frequent visitor to the Tampa Bay Area. He’s a nationally acclaimed storyteller, singer-songwriter, humorist and champion whistler who is in demand at storytelling festivals throughout the country for his award-winning tales full of colorful characters, humor and music.

“This is what he does for a living,” Maureen says. “You always have to be looking for places to tell stories. Before Covid, a lot of storytellers got paid for their gigs, got tips, and sold CDs, but CDs are going away. Some people are putting their stories on flash drives and selling those. Andy has the added ability to sing and play an instrument. He is also a whistler,” she says. “A competitive whistler.”
. .

. . .
After meeting Irwin, Walt learned that Florida has its own storytelling festival and guilds – all small groups and he’s become a sort of storytelling leader. “Maureen’s is in Dunedin. Ross Tarr has one in St Pete,” he says. “I do one at SHAMc the first Wednesday of the month.”

However, instead of Walt’s usual format, he and Maureen have invited Andy Offutt Irwin to perform at the Safety Harbor Art and Music Center on Wednesday, January 4 at 7 p.m. as a special presentation before the monthly storytelling open mic.

“He is teaching a workshop in Dunedin the next day,” Maureen says. “He calls it Pin the Tail on the Narrative — Lawn darts meet Eudora Welty.“ Spots for the Dunedin workshop ($25) can be reserved by calling 727-742-1024, or at the Wednesday night SHAMc event.

Maureen and Walt want more people to tell their own stories, real, or made up. “There are storytellers across Florida,” Walt says, “but together we are a couple hundred people. We are trying to keep it going, trying to spread the word. I think if more people discovered it, they’d enjoy it. Every group is having a hard time building back up.”

It’s at his open mics where Belcher encourages new storytellers. “That’s where everybody gets a chance to try. I never turn anyone away. Sometimes people will think of a story and get the nerve to tell it after they hear the others.” He says he has also found new storytellers at The Factory St. Pete. “We do Second Saturday every month from 5 to 7 p.m. as part of ArtWalk. We’ve had 40 people in the audience. We have a little following down there.”

Maureen is looking forward to seeing Irwin perform at SHAMc and to his workshop on January 5 . “Everybody is welcome,” she says. “There’s not a soul who wouldn’t be, but this one is for adults. His workshop will be like mining your memories and finding things to tell stories about.“

“There’s a saying about three deaths,” Maureen continues, referring to a quote by David Eagleman. “There are Three Deaths. The first is when the body ceases to function. The second is when the body is consigned to the grave. The third is that moment, sometime in the future, when your name is spoken for the last time.”

“When you think about the time you were born to the time you die, those things in between make it so you’re not just a name on a list,” Maureen says. “If you want to live a long time, you better tell some stories.”
. . .