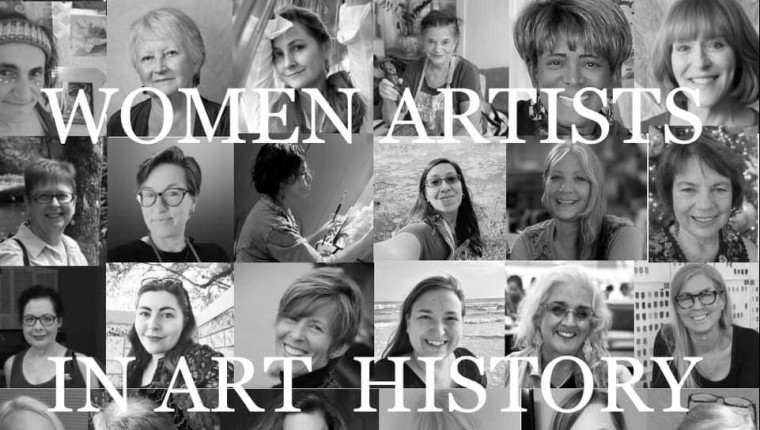 For this exhibit, each contemporary woman artist was assigned a woman artist in art history worldwide. The artist chose one of these historical pieces and created a unique and significant piece in her own personal style.

This project has the objective to recover and elevate women artists in art history – and at the same time to promote contemporary women artists.

When I received an invitation for an upcoming art exhibition called 100 Women of Art History, I hardly knew what it was about. However, just by the title, I understood it was for me. Consequently, I was thrilled and replied an emphatic YES, immediately.

I’d recently read a book about Artemisia Gentileschi and hoped I could have her as my artist, but she was already taken. So I combed through the list and one name popped out at me. It was as if there was an internal highlighter making the name Hildegard von Bingen stand out. I knew virtually nothing about her and I couldn’t wait to learn.

As I began researching her, one of the first images I saw was called Universal Man. He stood out because of the immediate similarities to da Vinci’s Vitruvian Man. Angered, I immediately took a screenshot of von Bingen’s image and his and placed them side by side. The commonalities are astonishing.

Why had I never seen Hildegard’s Universal Man before?

Why had I never heard of her before?

Her Universal Man was created 325 years before da Vinci’s Vitruvian Man. The answers to my questions are obvious and are the reasoning behind this entire exhibit.

As Alicia Campos, the creator and curator of this show has pointed to, women artists have been oppressed, suppressed, overlooked, ignored and disregarded. It’s long past time for those tables to turn.

In the words of Alicia, “This exhibit is highlighting the importance of recovering women artists from the past. Through us, contemporary women artists of the present, as art teachers, teaching artists, writers, etc to include women in art history in our projects, our art classes, in art history books, etc.

“Example: we cannot teach Kandinsky without teaching first Hilma af Klint. We cannot teach Picasso without mentioning Picasso’s motivations to paint in so many styles inspired by other cultures and styles. Example: the Algerian Women series by Picasso informed by Algerian printer Baya Mahieddine’s artwork and style.

“The fight is ongoing. . . women must keep going forward and paint for and represent other women.”

I would add that we can’t teach da Vinci without first teaching Hildegard von Bingen. Not only did she create Universal Man, she was the epitome of a Renaissance Woman – before the Renaissance was even born.

In my search for articles showing Hildegard’s much earlier vision of Universal Man versus da Vincis’s Vitruvian Man, I could only find two. Neither article gives Hildegard’s genius much acknowledgment – all the adoration goes to da Vinci. This is a shamefully common theme in the patriarchal world culture.

Universal Man is just the tip of the iceberg of the extraordinary Hildegard von Bingen. Hildegard of Bingen lived in Germany from 1098-1179. Women had two options at this time. One was to be married off. The other was to live in a monastery.

Hildegard, the youngest of ten children, was ‘given to God’ at age 8 and lived in the women’s cloister of the Benedictine monastery of Disibodenberg. At that time, Jutta of Spanheim was the leader of the noble women of the community. Jutta took Hildegard under her wing for the next three decades until her death in 1136.

After Jutta’s passing, Hildegard was rightfully chosen to lead the women going forward. Now the Abbess, Hildegard led her sisters and all of their dowries to a new cloister that was built for them in Rupertsberg near Bingen.

An important aspect of von Bingen’s life is that she had visions since the time she was a child and suffered migraines and other physical symptoms throughout her life. She documented her visions in extraordinary detail in her writings, music and visual artwork.

In addition to these volumes, Hildegard wrote a handbook on nature, a guide to holistic health including the healing properties of 2500 plant species (still observed in Germany today), poems, sermons and letters. Hildegard wrote over 75 songs and one opera.

Mysticism, cosmology, symbology and deep heartfelt reverence and love permeate everything she expressed in her life. All astonishing achievements for a woman in her day in the male dominated culture and church.

It is mind blowing what Hildegard von Bingen accomplished in her 81 years. It is also a testament to her brilliance that she lived what she discovered and shared. As a result, she survived 81 years in the 12th century, a rarity.

What is more mind-blowing is why she isn’t a household name like St. John of the Cross, Francis of Assisi, Thomas Aquinas or Leonardo da Vinci. Let’s change that.
. . .