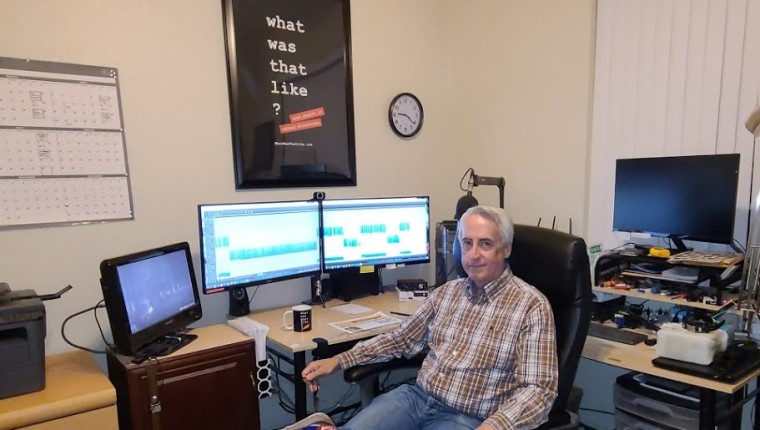 . . .
Until recently, Scott Johnson built his life’s work in technology – he was a computer guy. But when he discovered podcasts in 2011, his path began to turn in the direction of storytelling.

Johnson has owned a computer business since the late 1980s. He started in Maine, where his wife is from, and continued in Safety Harbor when they moved back to Florida 20 years ago. He enjoyed listening to podcasts and eventually realized hosting one could benefit his business. Johnson became an accessible computer tutor for non-tech people and simultaneously learned the ropes of hosting a podcast.

The Computer Tutor podcast has since retired but in 2018, Johnson branched out beyond the world of tech advice. He wanted to tell the stories no one else was telling, and he wanted to host in a way no one else had hosted.

“I found that the podcasts I really enjoyed listening to were the ones that told true stories,” he explains, “but not in the way I would like the stories told.”
. . . .
He already knew what he had to do

. .
His What Was That Like? podcast answers the question many people have after reading a news story – What was that like?  “Fortunately, the domain was available,” he says. “I made a list of people I wanted to talk to. I started looking in the newspapers.”

After his initial idea, Johnson began searching for people. His programs came from things he read about, like a woman in Texas who’d accidentally killed someone. “Of course, it was a difficult thing for her to talk about,” he says. “She was the very first episode and yet she agreed to do it. What a great story to start out with.”

You can hear Scott Johnson introduce the series here

Johnson could have followed the paths of other podcasters. But he knows what questions to ask to encourage the storyteller, which directs each episode toward an intimate, honest conversation. His is not a skim-the-surface type of podcast – it tunnels right to the heart— the vulnerability of the story.

“Two of her daughters were in the car with her,” he continues. “There are just so many aspects — the grief, the guilt. . . having to tell your kids maybe Mommy might have to go to prison.”

Johnson took it a step further – he was able to acquire the recording of the 911 call. “She had to have her therapist listen to it first,” he says. “When this happened to her, there were no therapy groups. Think about how often something like this happens. It’s every day. The amazing thing now is that she has her own podcast where she brings in callers and gives them a chance to talk about what happened to them.”

He is always looking for new stories. He finds many on Instagram and Reddit and others are suggested by his listeners. “I try to offer a wide range but there are some that are just tragic.” Even in those, Johnson does his best to find an aspect of positivity. “In one episode I interviewed a man whose 16-year-old son died of an asthma attack. It had only happened six weeks before that. . .”
. . . . .
His podcasts are about real people in unreal situations

. .
While all are interesting, Johnson recommends starting with one called “Dan Was Mauled By a Grizzly Bear.”

“Dan is a great storyteller,” he says. “There’s a twist and we intentionally did it that way.”

According to Johnson, the weirdest story he’s shared is “Shiny Ate His Own Foot” about a guy and his group of friends. “They’d talk, you know, if you had a chance, if it was legal and ethical and healthy, to eat human flesh, would you do it?” The storyteller did have the opportunity – he was in a motorcycle accident and had to have his foot amputated. “He asked the hospital for his foot and they gave it to him. He invited his friends over. One of them is a chef.”
.
Johnson is building his library one podcast at a time. He is nearing 100 episodes. “I’m looking for more guests for situations like falling off a cruise ship while underway, a passenger on a train that went over a cliff, someone who has saved a life but isn’t a firefighter or a paramedic.”

His interviews can be found on most podcasting platforms and Johnson makes it easy to find those platforms and to contact him through his website. His social media links are there, too. He also has a Facebook group with more than 2,000 members, where listeners talk about episodes – and while it’s an audio-only podcast, he also has a YouTube channel.

“I read a lot of nonfiction — anyone that has a talent for crafting a story. I know the effect it has on me.

“I want my podcast to have that on the listener,” he says. “Almost everyone loves a well-told story.”
. . .