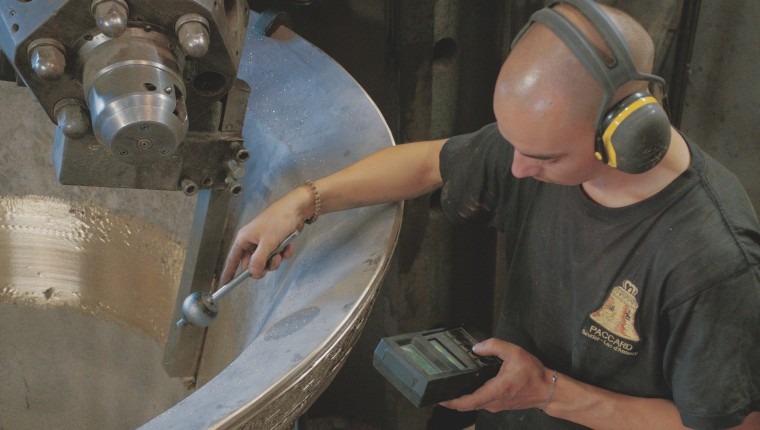 The Ars Sonora Bell Tower is Unique
not just to Tampa Bay,
but Anywhere in the World

A grand new structure greets students and the public this weekend when the University of Tampa celebrates with the peal of bells.

After years of planning and fundraising, the Ars Sonora bell tower makes its formal debut as the largest of its kind in the world – and the first to ring out in the United States.

The majestic musical sculpture soars 105 feet above the Sykes Plaza in the heart of the UT campus, intended to be a sentinel of inspiration and calm.

“The Ars Sonora, paired with Sykes Plaza and the Sykes Chapel and Center for Faith and Values, creates a focal point on campus for students to gather, reflect or just enjoy the ambiance of the setting as they walk by,’’ says Eric Cardenas, the university’s director of public information.

Completed this summer, the sophisticated instrument will vibrate with the harmony of more than 60 hand-crafted bronze bells, which can be played via a special keyboard or laptop computer inside the neighboring chapel or other locations nearby.

Listen to the Ars Sonora playing Bach, recorded on location by Kurt Loft

The largest of the four swinging bells in the Ars Sonora is the Sykes bell, approximately 6 feet tall and weighing 5,000 pounds. It bears the name “Susan and John Sykes Ars Sonora” and is inscribed with the Sykes’ quote, “May These Bells Bring Inspiration to All.”
– photo Fonderie PACCARD @Yannick Perrin

“The Ars Sonora’s technology allows the keyboardist to play most any type of music,’’ Cardenas adds, “and plans are for the ars sonorist to play the instrument as part of concerts with musical groups and vocalists.’’

The tower’s bells were manufactured at the Paccard Bell Foundry in Annecy, France, where workers have been perfecting techniques since 1796. For the past two decades, the Paccard team has been fine tuning the Ars Sonora concept, marrying centuries-old practices with 21st-century technology. Ars Sonora is a trademark name of the Paccard Foundry.

A worker at the Paccard Bell Foundry in Annecy, France, melts the molten bronze mixture for the bells in the furnace. The company manufactures bronze bells much the same way as it did in 1796 when it made its first bell, which is still in use today
– photo by Quentin Paccard

Each bell is individually designed to play a specific note – a tuner precisely adjusts the bell’s harmonics by etching the interior of the bell, reducing its thickness ever so slightly to achieve a desired musical effect.

The instrument’s bells are electronically connected to a sensitive piano keyboard. Each key controls a dynamic striker on a particular bell, allowing musicians to perform with nuance and dynamic contrast.

Philippe Paccard of the Paccard Bell Foundry shows UT President Ronald L. Vaughn the mold for one of the swinging bells in the Ars Sonora. Paccard explains the lost-wax process – this method of bell casting is over 5,000 years old and involves a molten metal (in this case, a bronze mixture) being poured into a mold that has been created by means of a wax model. Once the mold is made, the wax model is melted and drained away
– photo by Quentin Paccard

As the musician hits a note on the keyboard, a signal travels from a control room in the Chapel through underground wires to junction boxes at the base of the tower. About six miles of wires connect the keyboard to each of the strikers of the bells.

A worker at the Paccard Bell Foundry tunes a bell for UT’s Ars Sonora. The Paccard tuning method requires precision and patience, as the tuner must continuously pause in the etching process to test the bell’s harmonics. This artisanal process has been in use for more than two centuries and creates the exacting musical quality for which Paccard bells are known – photo by Roundhouse Creative

The sculpture is intended as more than a musical instrument. If forms a striking focal point as part of a park-like plaza for students to gather and interact. The landscaped plaza serves as a venue for outdoor events, and 147 state-of-the-art lights give the area a seductive glow at night.

Bad weather is part of the design equation. Anchoring the Ars Sonora (which translates to “art’’ and “sound’’) are 18 reinforced concrete drilled piers embedded up to 80 feet into the lime rock.

Designers also have taken into account Tampa’s abundance of lightning, which could damage an otherwise sensitive instrument. To prevent harmful strikes, the structure serves as a giant lightning rod connected to a continuous underground loop.