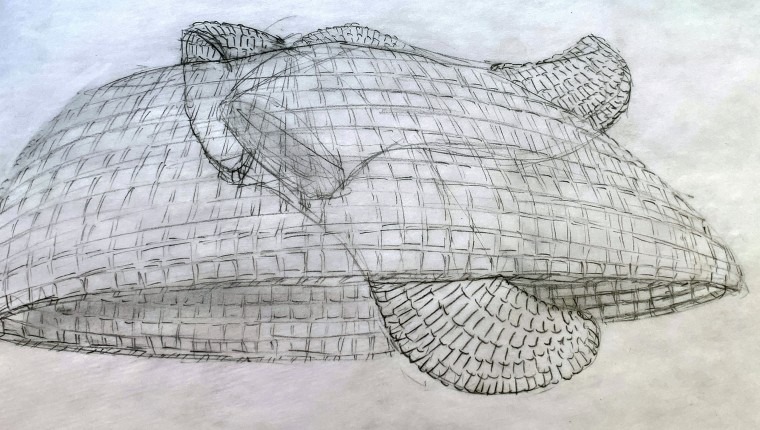 A couple years ago I was thrilled to discuss the possibility of doing an immersive exhibition at the amazing gallery at Creative Pinellas.

The process for creating the show began with a concept and drawings. Here are some of the drawings I made to try to flesh out what the sculptures would be. They also help me figure out quantities of materials, how much help I’ll need, how long it will take to make it, etc.

Here is my initial concept.

Scientists have postulated through mathematics, that the mass of the earth, and other planets is not sufficient to maintain the gravitational orbits they keep. Nor is the mass of earth enough to generate the amount of gravity we experience. By the numbers, everything on earth, and in the universe should be flying apart. To solve this enigma scientists and mathematicians postulated the existence of an unseen force that must be everywhere. They called it dark matter.

Now, using a giant hadron collider, physicists have proven the existence of dark matter and can factually state that dark matter makes up the majority of everything in the universe, outweighing physical matter six to one.

This exhibition examines the spiritual implications of the facts described above as well as the stark inequities of our current society and the absurdity of our preoccupation with petty differences.

It begins as a single, eloquent form. One idea inheld with familiar curves that point to our own physicality. Volumes that speak to our experience. A shape that beckons us with virtue and a recognition of the ubiquitous grace within all living things. An immaculate creation to be upheld as an example of our finest nature.

Then, this best representation of perfection is ripped into halves. Torn in two like a delicate insect captured and destroyed by a careless child.

The end is the beginning. The cleaved remains begin to grow and evolve independent of one another. Soon both are even bigger than the original form. The new growth can be considered scar tissue grown into a huge translucent shroud. A kind of shield allowing in the light but keeping the two apart. Visitors can still recognize vestiges of what once was but now must experience them like divorced parents in two separate cities for a holiday. We find ourselves forced to choose one over the another. There is a nostalgia for the way things were, but the dysfunction that led to the cataclysm is a distant fog; the night’s dream is lost in the doings of the day.

Finally, like a stubborn choice hastily made and later regretted, there is realization. As we approach oblivion the senselessness of our selfish choices stands revealed and we see that either path leads to the same destination. What before seemed so different, so other, becomes familiar again, becomes self, becomes the same.

There is only one thing. Every object, animal, planet, grain of sand, and anything else one might imagine, is a manifestation of the one thing. Consciousness is the eternal intelligence that creates our world and the infinite universe. Our existence is consciousness becoming aware of itself.  Some will say the opposite of life is death, this is incorrect. The opposite of death is birth. Life has no opposite. It was not born, it does not die. It is. To this truth, now awaken.