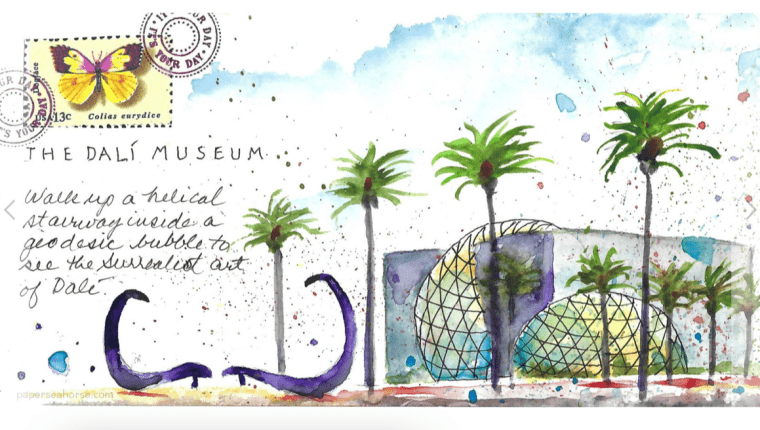 DEAR ME
Postcards Inspired by Picasso

. . .
Have you ever written yourself a postcard?

I did — at a workshop last month at the Dalí Museum offered by The Paper Seahorse.

You can, too. Just join the second Art of the Postcard – Picasso Style workshop at the museum on May 10 from 6-8 pm.

The Paper Seahorse is a Tampa-based stationery store that addresses what its founder, Tona Bell, calls “the digital dilemma” – the fact that these days so many of us are constantly in front of our computers.

“My vision is for people to keep in touch with themselves and others,” says Bell. “We have the tools to help you digitally detox.” Her shop offers a curated collection of stationery, writing tools, notebooks, letter writing sets, gift wrapping, writing accessories and letter pressed goods as well as creative classes that encourage people to slow down and writer a letter. Or a postcard.
. . .

. . .
For years members of The Tampa Bay Letter Writers, co-founded by Bell and Tammy Wright (who actually holds bachelor’s degrees in Pulp and Paper Science and Chemical Engineering), have gathered at the store to do just that. They turn off their screens and take time to type missives at the store’s “writing bar” on vintage typewriters from the ’20s to the ’70s — or write letters, thank you notes or cards out by hand in one of the shop’s writing nooks. Members swap ideas (and materials) and by the end of their day, stamp their creations and mail them. Although lately the club’s sessions have been online, the spirit is the same – Long live snail mail!

At the Dalí workshop, it was “phones off, pens up” as well. The evening began upstairs in the galleries showing the special exhibit Picasso and The Allure of the South. The Spanish artist was himself an avid fan of writing, illustrating and sending postcards. There is a lot to be learned from Picasso’s playful approach to art.
. . .

. . .
After touring the special exhibit, we headed to the spacious Raymond James room whose windows overlook the museum’s Avant-Garden. At each of our work tables, which we shared with one or two others, there was a packet of postcards, stickers and quality papers in various sizes. Also on the table was a lightning whelk, a unique Florida shell that, in contrast to most conches, unusually spirals to the left.

For more Picasso inspiration, Tammy Wright showed us some examples of the Spanish artist’s postcard creations. The first was a card Picasso sent to his friend, artist and writer Jean Cocteau. In the space where most people write a message, Picasso had painted a floor-to-ceiling window looking out onto a balcony, specifically the balcony at 10, Rue d’Anjou where Cocteau’s mother had an apartment. The postcard is addressed to Cocteau at that address.
. . . 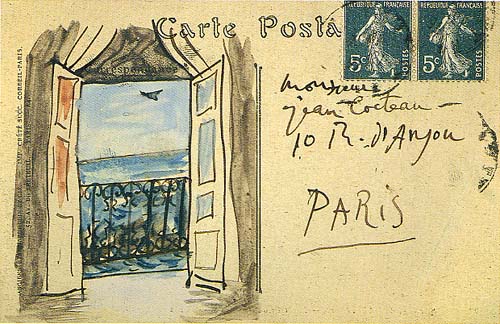 . . .
On another postcard Picasso had drawn an ink pen sketch of his portly friend, the poet Guillaume Apollinaire, who is credited with naming the Surrealist movement. Sporting a bowler hat, with a cigarette dangling from his mouth and his hands filled with books and notebooks, Apollinaire is walking his tiny dog. Picasso’s message? “Je ne te vois plus. Tu es mort?” (I don’t see you anymore. Are you dead?).
. . . 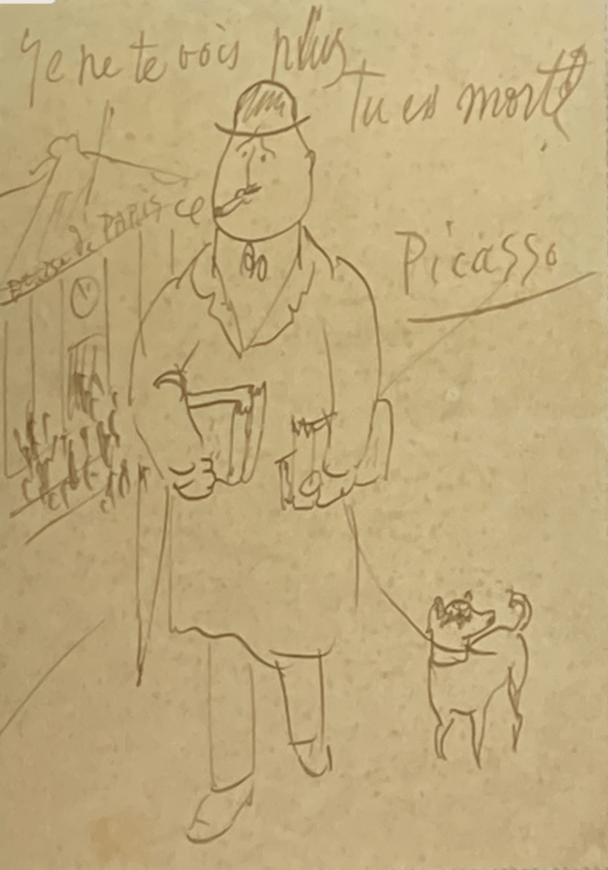 . . .
The third one had the longest message and no illustrations. Picasso sent it to Gertrude Stein, famous for her writings but even more for her apartment on the Rue du Fleurus in Paris that she shared with her partner Alice B. Toklas which became a magnet for avant-garde artists. Picasso obviously was addressing Stein’s concern that there were flies in the South of France where Picasso was spending the summer. He writes –

Translation: But no, Gertrude. There aren’t any flies
and I have only seen one mosquito which I have killed.
Write me if your heart tells you to. A thousand beautiful things
from the two of us to you (and Miss Toklas).

That postcard was signed “votre Picasso” (your Picasso).
. . . 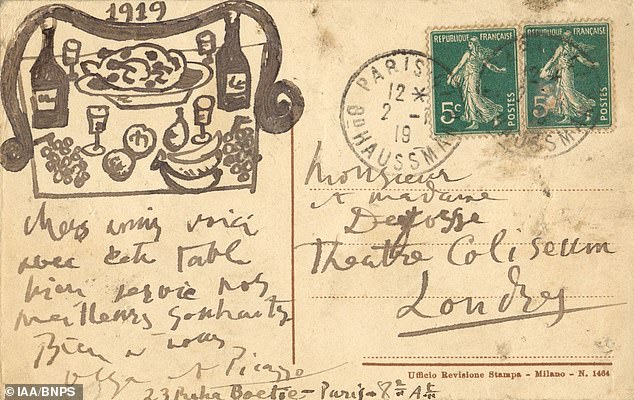 . . .
On the fourth, Picasso includes a pen and ink drawing of a plump turkey surrounded by wine bottles, glasses, grapes, bread, bananas and a pear under the year 1919. He and his wife Olga signed it and sent it to their friend Henri Defosse, an orchestra conductor who was living and working in London with a message, written in French, that translate as “My friends here with this well filled table our best wishes.” At auction in 2013 it sold for $27,600.
. . .

. . .
Two years later, another Picasso postcard would break that record. Ironically, that postcard never made it to its intended receiver. Sent in 1918, Picasso had addressed it to his French friend, but he wrote the poet’s name in Spanish – M Don Guillermo Apollinaire. The French post office marked it Rebut (Scrap).

. . .
To create our own postcards, the workshop organizers invited us to use the materials at three work stations – artisan pencils; ink pens and ink pots; shells, rocks and other objects for creating interesting imprints on our paper; rubber stamps with postal-inspired images (and one of a seahorse, natch); magazines and old postcards that we were encouraged to cut up for collaging — and more quality paper products, including brightly colored gift wrappings.
. . .

. . .
To start, I began at the work table lined with pencils and pens. There, Randy Rosenthal, who is a member of the Tampa Bay Letter Writers (and married to Bell), introduced me to the dreamy Blackwing pencil.

You thought a pencil was just a pencil? Think again.

. . .
Originally launched by the Eberhard Faber Pencil Company in the 1930s, the Blackwing 602 pencil quickly developed a cult following among designers, writers (John Steinbeck was a fan), illustrators, composers and more for their smooth writing, long lasting graphite, and adjustable erasers. Chuck Jones used the pencil to create Bugs Bunny and other Looney Tunes characters.

When the company went out of business in the 1990s, the price of its unused stock skyrocketed (some collectors paid nearly $100 for a single Blackwing pencil). Then in 2010 the Palomino company, which had nearly a century of experience in the pencil business, brought back the Blackwing brand “for a new generation of writers, musicians, and others seeking a more natural existence.”

They now come in four core pencils – Soft, Balanced Pearl, 602 Firm and Extra Firm. The Paper Seahorse sells them in lots of 12 for a lot less than $100. The erasers can be removed so you can put in a fresh one — or try a new color. The unique square design keeps the pencil from rolling off your desk, and contributes to the iconic pencil’s design-centric look.

And, if you need further incentive to become a Blackwing groupie, according to the Blackwing website, a portion of every Blackwing sale benefits music and arts education at the K-12 level.
. . .

. . .
Rosenthal also encouraged me to try out an amazing array of pens that slid across the page like butter, including an old-fashioned one which I had to dip in an ink well. I used that one to trace around my lightning whelk (named for the streaks on the shell that resemble lightning) to create my first image on one of the sheets from my packet. I then dipped the end of the conch into the ink pot and used it as a pen to write a silly message over my shell-shaped image – “Shell We Meet?”
. . .

. . .
My postcards weren’t likely to break Picasso’s auction record, but I had the feeling I was having just as much fun as he apparently did in making them.

My next stop was a table laden with an assortment of goodies I hadn’t seen since playtime in kindergarten – glue, scissors, tracing paper, colored pencils, wax sticks, stamps and colored tape. Thinking of my whelk, I decided to create a more stylized beach scene for my second postcard. I placed my whelk under some tracing paper and rubbed it with wax sticks, creating some texture, then cut out pieces that I glued onto a rectangular card. For “sand dunes” I cut up a page of music. Then I rubber stamped some images of seahorses in my “sand” and added stamps marked “Via Aerea, First Class” to make my postcard look official. A round stamp with an airplane marked 6 cents provided the “postage.”
. . .

. . .
At my last stop, Bell showed me how to wrap my postcard in a sheet of gift wrapping, creating an envelope so I could mail my letter to myself.

Finally on the back of my postcard, I wrote that message to myself. . . 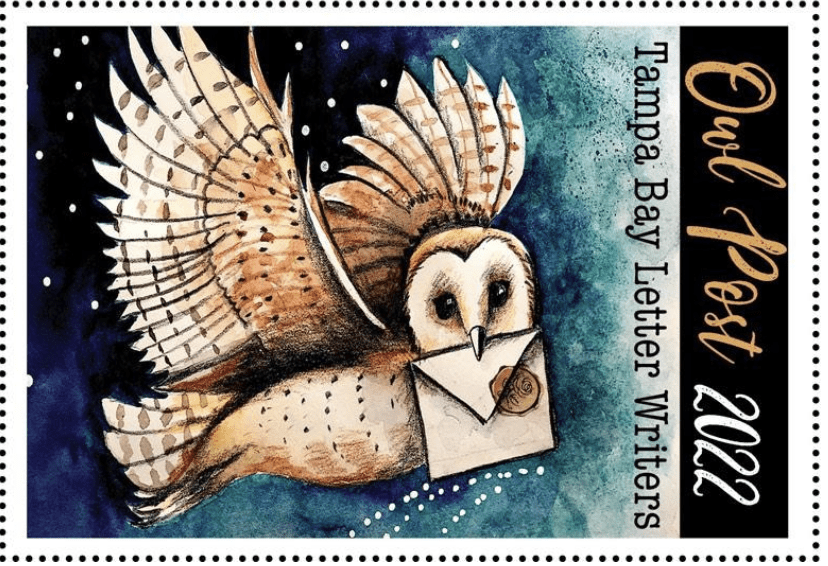 Sign up here to join the Tampa Bay Letter Writers, register here to attend the May 10 Dalí workshop or catch one of these upcoming creative classes offered by The Paper Seahorse online.

Introduction to Journaling ($55): April 23, 10 am-noon online
This class includes a journaling starter kit that will be mailed to participants two weeks prior to the workshop.
. . .

. . .
Gratitude Journaling ($55): June 11, 10 am-noon online
The kit that will be sent to you by mail before the class, includes a handcrafted eco-friendly journal with a silkscreen, handmade paper cover and smooth writing paper; a smudge-proof, fine point Le Pen from Japan; a postcard and sticker set; a set of three letterpress thank you notes, and a Guide to Gratitude, tips for living a fuller, more peaceful life right now.
. . . 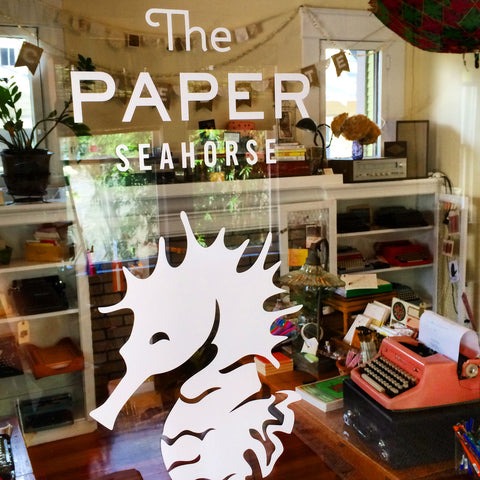 . . .
Brush Lettering 101 with Amanda Kammarada ($50): Ongoing
Kammarada, author of The Hand Lettering Workbook: Step-by-Step Instructions, Practice Pages and DIY Projects, offers 70 video lessons teaching participants how to hold a Tombow brush pen along with the basic strokes needed to create letters. Each letter of the alphabet has its own chapter. The fee also includes a live online class session where participants can ask questions and discuss their progress.

By mail, participants are sent tracing paper, practice sheets on premium smooth laser paper (which includes basic strokes, upper and lowercase letters, and words), a Tombow dual tip brush pen, a Tombow Fudenosuke brush pen and blank notecards. If you supply your own materials, the cost is reduced by $15.
. . .