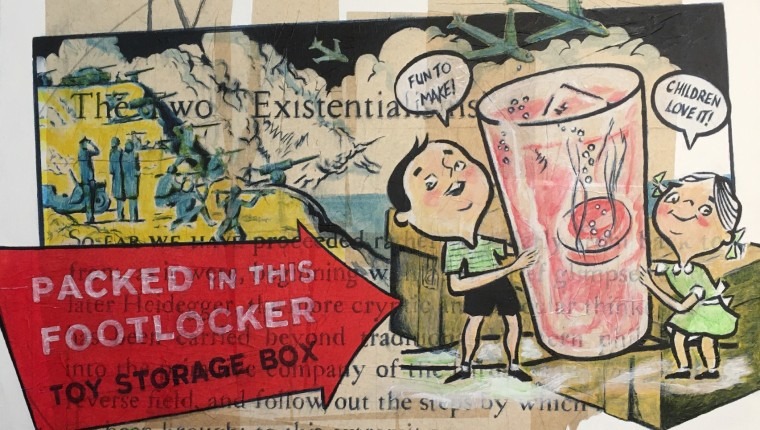 When I am staring at a blank canvas, the first thing that I do is to start defining the inherent grid and systems. Here are three tricks that I use every time:

Now the sexy stuff starts happening when you introduce 1/3rds! Thirds are magical because they are near the proportions of the golden section (1:1.518) and like the t-shirt that a couple of students made for me one year, “it’s like voodoo; it just works.” And just like voodoo, I am going to share my patented and road tested way to easily find thirds on anytime. The secret, is Ozzy. Pretend that you are at an Ozzy show and you want to pump you hands up in the air with the devil horns; there you go. Stick with me here: now take those devil horns and hold them up to your canvas. Adjust your fingers so that the spaces to the left, right and center are equal. Make a mental note of reference points and then go mark your canvas. It may not be laser-level spot on but, it is…close enough for rock n roll.

Second, I will stand facing the center of the canvas with a bit of charcoal in my right hand, reach to the outer right edge of the canvas and then draw and arch into the canvas; toughing the top and allowing the natural proportions of my arm/body to create a golden spiral and then I will repeat this with my left arm. In the photograph of the painting above, you can make out some of my early construction lines. This is a trick for further understanding the physicality of the canvas and it is also a good ice-breaker to prepare for painting.

And my third step in preparing to tackle a canvas is to define its base units. This base unit will be used to build the interior structure of the page. The smallest unit will define margin and be multiplied around the page. From this point on you have an idea of unit and proportion for differentiation (contrast). If I have a 5” base unit on a canvas that is 60”x40” that 5” margin will define what functions within the interior of the canvas and what will have to break the canvas’s edge. The rule is this: when dealing with the interior space, emphasis should be within the margin and if something breaks margin it must break the frame of the canvas’s edge. You can see examples of this in the pieces 404 and Two Existentialisms.

Remember the Pirate Code, these are guides and it is up to the artist to follow, break or bend the rules. Also, fun didbit for budding art students; if you ever find yourself in a critique and someone asks you why you did something, look them confidently in the eye and say, “it was and artistic decision.”