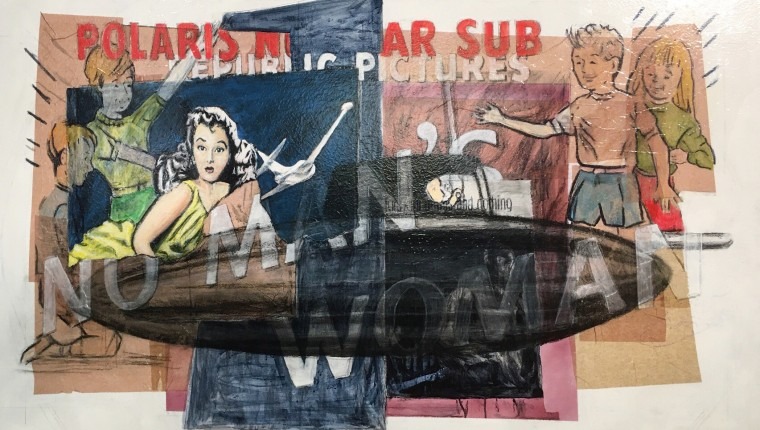 It was this piece in which I began working with personal references. The first thing that I painted, now barely visible after several layers of subsequent paint collages,* was an album cover by the Psychedelic Furs band. Forget about the Ikea Billy bookcase full of baggage that I carry with this album, the title, All Of This And Nothing, fits perfectly with my thematic investigation of ephemeral, its agency and its loss.

I have always been an old movie junkie, but I am about to need a 12-step program. There are too many places online to get a fix. I spend so many hours at night with YouTube that I may have to buy it a ring. This naturally influences and dovetails nicely with my work. And so began the movie poster-esque woman in the yellow dress with the plane flying past…intrigue; what is happening here?

Part of my working process is to continually pour over old comic books; I love the old ads: x-ray specks, spy pens, Sea-Monkeys, and in particular, the Polaris Submarine. The Polaris Submarine is the penultimate unfulfilled childhood desire. It was a cardboard submarine that you could sit in; it had firing torpedoes, a real periscope, an electrically lit instrument panel…! This was my version of the Red Ryder BB gun, except there was never one behind the tree! Only God knows what mayhem would have rained with those firing torpedoes!