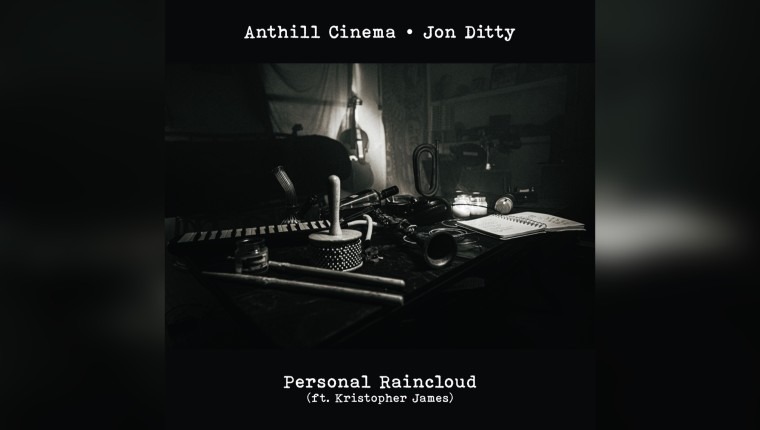 The other day, I released a new collaborative album with local Tampa Bay 7-piece experimental fusion collective, Anthill Cinema. In this blog post, I figured I’d take a moment talk to the oddities surrounding the inception of its single, “Personal Raincloud.” If you haven’t already heard it, please give it a listen on your favorite streaming service.

This song was originally my least favorite, musically, of the handful of instrumental compositions the band had delivered to me. I’m not sure what was the reason for my initial distaste, but the melody/groove just didn’t speak to me. The band had tentatively titled the track “Good Morrow (Promiscuous Women),” for which I am clueless as why. I ran with the temporary title as inspiration, incorrectly interpreting it to mean “a better tomorrow.” This perspective led me to write what ended up becoming the second verse. After evaluating what I had written, and due to time constraints we had placed upon ourselves for finishing the project, I needed another sixteen bar verse…

Back in December of 2017, I had been enlisted to perform as an Artist at Large at the [then] annual Hometeam New Year’s Rally in Lakeland, FL. This encouraged me to contact and sit in with as many bands as I possibly could on that particular year’s line-up. Friday night’s headliner was South Florida staples, The Heavy Pets, who I had performed with on multiple occasions at Dunedin Brewery. After explaining my role in the festival to Mike Garulli (one of their guitarists), it was decided that I would rock a verse over their tune, “Rainy Days.” Not wanting to regurgitate a previously-composed Jon Ditty verse, that failed to match the content of their song, I specifically wrote one for this particular performance. While it’s been a verse that I have now interjected randomly during live shows over the past number of years, it never really had its own home.

“Good Morrow” was, at this point, what I was still working with as the title for the song with Anthill Cinema. I felt the melancholy content of the Heavy Pets’ verse worked well in conjunction with what I had arrived at in my fresh set of lyrics—and, the song tempos were similar or the same (which is honestly, a very important part for making that type of transition). For times’ sake, I incorporated those nearly five-year-old lyrics as the first verse to “Good Morrow.”

At this point, Justino Lee Walker, Anthill’s frontman/guitarist/ringleader, had heard the recording of my vocals for that song, and argued for it be renamed “Personal Raincloud” per my first verse ending line. He had solicited the help of Tampa Bay songwriter/vocalist, Kristopher James, to write and record what ended up becoming one of the catchiest hooks on the entire album. This song went from being a throwaway track, to one of my absolute favorites. Funny how that can happen during the creative evolution of any type of art. I felt that the super weird way, of how this song fell together, was worth sharing. Furthermore, here are my verse lyrics for anyone interested in those types of stuffs:

Overcast: don’t ask why my brain has plaster-casted
Aftermath, epitaph, crises I can weigh upon
Nodulated Golluming the follies unexchangeable
Made among the casual refrain of my adulting
I’m doltish. Aren’t we all? I poly-repeated demeanor
Remedial loss; moss in tufts appropriating surface
Verbiage: cure for the itch or for the idiot?
Affirming of my alertness, ineffective at best
Yo, optimism nested in a therapist,
American as Imperialism, tyranny is pirouetting focus
Pinocchio omen Nostradamus samba Simba sandwich
Canaveral: I’m probably gonna have to live with it
Ipso facto: pack brawn behind the backhoe
Pantone in indigo; inevitable: the gallows
Storm in a teacup; personal raincloud
Give it away, give it away, give it away now

Tomorrow’s brilliant revolution dealt; today’s not worth awake
Chasing whatever is that I’m conditioned is dead in the water remains opaque
Contained unfounded insecurity, societal taxidermy
How we’re zombifiedly idling towards “important” nihilism
Shorted I guess, the unpredicted algorithm
I don’t find a comfort in the ruse that God is trying to show me
Actions have consequence, shun a defeatedly random pointing
But a narrowed perspective is surely broader clairvoyant
I’m toiling choice as anointed and poised in pose as gargoyling
Devoided joy in rejoicing by folk’s success in their buoyancy
Moeity, yin and yang, our fortune’s sinusoidal
Your doilies and rainbows foreordained turn hemorrhoidal
It spoils, like my attitude on shitty days
When what I planned to happen didn’t end up happening my way
And the blame goes unarraigned, so leave me sulk in my own mourning
Mourning now—only resolved when I wake tomorrow morning

By the way, a super limited number of CDs are being pressed of this album (100 total). If you would like to acquire one as a physical memento for your collection, you can do so at jonditty.com/store while supplies last.