Discovering the genius of Beethoven,
up close and personal

Beethoven will be busting out all over this year as the world celebrates the 250th anniversary of the great composer’s birth.

Festivals and musical groups everywhere are making Beethoven the spotlight of their 2020 programs, teeing up his iconic symphonies, concertos, sonatas and overtures at every possible opening in the calendar.

One of the more intimate programs is Wednesday, February 5 at the Palladium Theater in St. Petersburg, when the visiting Calidore String Quartet offers three essential chamber pieces: the quartets nos. 6, 11 and 15. The lineup gives listeners a chance to delve into Beethoven in his early, middle and late periods — and in many ways captures why his music never seems to grow old.

Ryan Meehan, a violinist with the Calidore group, said they are playing all 16 of Beethoven’s string quartets during this anniversary year and the experience so far has been unforgettable.

“Performing the Beethoven cycle is the musical equivalent of scaling Mount Everest,’’ Meehan explains. “It’s a grueling nine hours of music comprised of some of the most technically intricate and emotionally demanding music ever conceived — to which we’ve dedicated much of our studying and performing over the past decade.’’

Summarizing the power of Beethoven is nearly impossible, but Jan Swafford came close in his book Beethoven: Anguish and Triumph, when he wrote “Beethoven lived to the ultimate capacity of being human, and he encompassed that in his art.’’

The Calidore program is a biography in music. It reflects Beethoven moving beyond the influence of Mozart and Haydn, forging an independent style and entering a transcendental realm. Listeners who delve into these evolutionary stages will meet the composer as a young man, mid-life explorer and philosopher.

The concert opens with the String Quartet No. 11 in F Minor, Op. 95, known as the Serioso. Written in 1810, the work is part of the explorer’s mind, and the only one of his 16 string quartets that bear a name given by the composer himself. Serioso aptly describes the somber mood — and reflects his angst over growing deafness and loneliness.

Set in four tight, condensed movements, the tenor throughout is agitated, volatile and full of nervous energy. The range of emotion is striking for such a compact work, and must have confused listeners at its premiere in 1814, four years after it was written.

Beethoven believed the work was stylistically ahead of his time and did not expect it to be popular, because “the quartet is written for a small circle of connoisseurs,’’ he said, “and is never to be performed in public.’’

Next up is the String Quartet No. 6 in B-flat Major, Op. 18 No. 6, part of six string quartets that pay tribute to Haydn and Mozart.  However, the last of the set — known as La Malinconia (Melancholy) for the adagio that introduces the final movement — moves beyond classical style and strikes boldly into a new romanticism that Beethoven would almost single-handedly define.

There’s not a hint of melancholy in the opening movement, as the strings engage in witty dialogue that zig-zags up and down. A pensive adagio follows, then Beethoven inserts a riotous scherzo peppered with intentionally misplaced accents.

All of this sets up the climax — and nothing prepares the listener for the somber theme Beethoven said “must be played with the greatest delicacy.’’ Here, Beethoven invents a four-part scheme that sounds off-balance and emotionally unstable, juggling loud and soft dynamics before the instruments align in a mad dash at the end.

The Calidore wrap up the night with a monster, the String Quartet No. 15 in A Minor, Op. 132, composed between 1823 and 1825. Anyone who explores the world of Beethoven eventually reaches the realm of this and the other late quartets — profound, daunting and hypnotic creations that continue to cast an almost mystical spell over listeners. 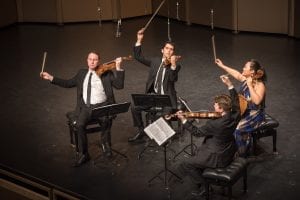 Rather than looking outward, this music is introspective and transcendent, and appears to be motivated by catharsis.

His plan for this quartet is on a grand scale — five opulent movements anchored by one of the most original pieces of music of its time, a 20-minute benediction that in itself is divided into five parts.

An ominous four-note theme permeates the opening movement, offset by a flowing, Baroque-like allegro that follows. Then comes the work’s centerpiece, which Beethoven gave the title Holy Song of Thanksgiving to the Deity by a Convalescent, in the Lydian Mode. What did he mean by this? It was his prayer for recovery from pain, and he chose an archaic choral mode to convey a sense of timelessness.

A solemn hymn takes listeners into a peaceful realm before the music revives, just as the composer himself was “feeling new strength.’’ In this remarkable movement, Beethoven explores a sonic space that could complement most any chamber music program a century later.

‘’Beethoven composed [the 15th quartet] at the end of his life when he was completely deaf and bedridden, at a time when he was trying to reconcile deep conflicts within himself and the world around him,’’ Meehan says.

A short movement in the style of a march brings listeners back to Earth and goes without pause into an impassioned allegro. Here, Beethoven completes a remarkable, emotional arc that began 45 minutes earlier.