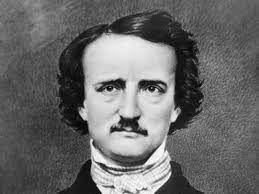 I’m writing a show. One of the characters is a man with an usual job. This is one of his musings about his life and the nature of loneliness. He is ruminating on Edgar Allan Poe.

Poe developed the detective story. Did you know that? Every year, on Poe’s birthday, some unseen someone has visited his grave with a bottle of cognac and a single red rose. For one in paradise. Or where ever. He was a haunted and very lonely man in life.
I don’t honestly know what desperate loneliness feels like. I don’t think I was ever alone, growing up. Big family. Constantly tripping over one another like puppies. Always someone there. Always something on the stove. War. Crowded. My heart always crowded with faces and voices and life. Solitude was foreign to me until I left home for college. First night in the dorm- my roommate wasn’t in- it was so ALONE. It was so disturbing and unreal- I had to pretend that my twin brother, Sam, was there with me just to get to sleep. I talked with Sam in the darkness- just like I had done at home in our childhood bedroom all my life- I talked with Sam. I told him all about my roommate who was not there. So I made him up. I described him to Sam in excruciating detail. Based on the items he had brought into the dorm room (a guy that uses Suave green apple shampoo? Really?) I deduced who my roommate was as a person. When Jim did show up the next day, I told Sam about him again. To see where I’d made a lucky guess. After that, I kept talking to Sam who wasn’t there. He was the other hemisphere of my brain. The other half of me. Together we would deduce who people were by the artifacts we observed them to have. You know- heavy backpack? Could be a brain. Could be desperately trying to pass a class – cramming his noggin full of information he’d never retain. Ah- but note the look of stress and fear in him. Must be the latter. Sam? What do you think? That kind of stuff. Casual. But after a while, you can get pretty accurate. Get into the meat of them. Describe what their whole day is like. I never told Sam that he’d become a detective. He died last year. Leukemia. Now I know how ALONE feels.