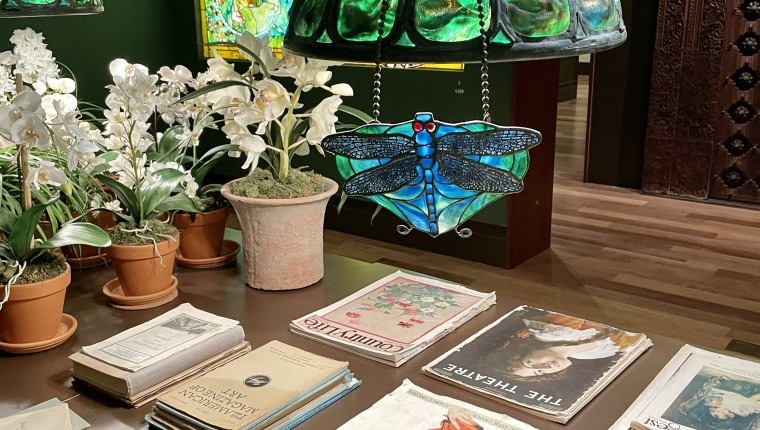 This week I’ll continue my discussion of Tiffany’s formative and adult years and how the stage was set for his thriving and lucrative career in home furnishings and beautiful objects of art that are still highly praised and sought after today.

Tiffany was born in 1848 shortly after his father, Charles Tiffany, founded a modest venture in New York that grew to become the most prestigious silver and jewelry company in America — Tiffany & Co. Does Breakfast at Tiffany’s ring a bell? Demonstrating early artistic promise, the young Tiffany went on to study art in Paris, and teachers there helped seed an enduring fascination with the art and design of Eastern and Islamic countries.

Settling into adulthood, Tiffany found success as an artist, exhibiting often in New York and abroad. The time Tiffany spent painting only deepened his interest in color and light, leading him inevitably perhaps to the consideration of glass as a medium. As early as age twenty-four, he was studying the chemistry and techniques of glassmaking.

In 1872, Tiffany married Mary (May) Woodbridge Goddard. Together and with friends, Tiffany and May traveled in Europe and North Africa. Tiffany’s new home for his young family at Bella Apartment House in New York City was also the first residence in which he practiced the fusion of Easter and Western styles that would become the hallmark of his interior designs.

His home also became a showcase for his talent, and it suggested to him the market for a fresh type of interior design. Using family connections and financial backing and partnerships with established artists and designers, he was able to make a smooth transition from artist to interior designer. While many wealthy Americans were looking to European historical models for taste and decoration, Tiffany provided a unique, artistic approach to interiors.

These interiors included windows, lamps, and lighting, and motivated him to apply for patents in his opalescent glass making techniques, which produced an unprecedented range of hues and three-dimensional effects in a single piece of glass.

Next time I’ll continue in the year 1885, when Tiffany opened the Tiffany Glass Company in Corona Queens, New York, and continued to design interiors and expand his glass making techniques and objects which he used to adorn his homes and those of his wealthy clients.

TIP OF THE WEEK:

If you haven’t been to one of our wonderful Tampa Bay Area museums recently, I strongly suggest that you do so. Spending a day immersed in the work of others is a great way to recharge your own creative battery.

There are a lot of great temporary exhibits in the area, including: Ansel Adams: The Masterworks & Clyde Butcher: America The Beautiful at The James Museum in downtown, St. Pete through July 31, 2022.