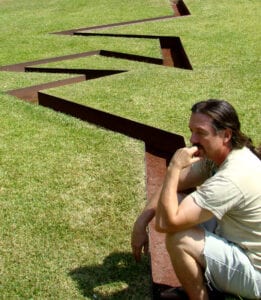 I came across this old magazine interview from 2008. I thought it was interesting to see what I was thinking and doing back then. I was surprised at how humorous and brash my answers were, especially the, “iron is my ally”, that part made me cringe. I think that paragraph was inspired by Conan the Metallurgist. Perhaps this should have been titled, “Everything you never wanted to know about me“.

1- What drove you to make your first sculpture?

I’ve always been in love with sculpture. I’ll never forget when my parents took me to see Michelangelo’s “Pieta” at the 1965 World’s Fair. I knew at that moment that I wanted to be a sculptor. I seem to possess an “artistic gene” accompanied by the desire to explore my abilities. In other words, I work hard at it.

2- Which metal are you most comfortable using for your creations?

Iron is my ally – dependable and unquestionable. Cold steel speaks to me. It reveals the mystery of manipulating its rigid atomic matrix to fit my visions, like Prometheus stealing the secret of fire. It displays its wondrous molten alchemy through the miracle of cutting and welding. After countless days of twisting, bending and hammering, cuts, bruises, strains and burns, iron and I have reached an understanding – together we create magic.

3- Your sculptures are mostly based on wild animals. Why is this?

As an artist I create what turns me on. I have a lifelong affinity and reverence for animals. And although I do use the human figure, I predominantly choose to express myself through the classic iconography of the animal kingdom. After all, we Homo Sapiens are the “naked ape” having acquired eloquence and civilization, but still harboring our old impulses and genetic legacy bred into us from millions of years of evolution that bind us to our animal cousins in an undeniably profound and mystical way. I exploit this kinship by creating ambiguously anthropomorphic imagery.

4-Are there any specific techniques you are fond of using?

Technique is subservient to message. This is what separates an artist from the craftsmen. I try not to concentrate on what techniques I will use to make a piece until I am first sure that the idea and purpose of the sculpture is sound. Then I employ many traditional metalworking techniques including blacksmithing, welding, cutting, and repoussé.

The process of adding odd shaped pieces to fit into an imagined framework is the process which defines the work. Forming each individual section to the desired shape at the anvil before welding it into position gives me direct spatial control of the sculpting process. Construction begins from the ground up, I literally start with the feet and work my way upwards. After the limbs are in place I build up the complete animal “in situ” using the real time visual feedback of seeing the anatomy unfold.

5- Do you create any artwork other than sculptures? If so, how do they influence and affect your understanding of the 3D pieces?

Painting and drawing translate the rough ideas of thought into two dimensions, a vital step in the process of yielding three dimensional form. Every sculpture I create begins with a drawing.

During the years I taught at Bilkent University in Turkey, I began painting again. As no ready made tubes of paint were available, I made acrylics that I mixed from powdered pigments and combined with a polymer base. One large composition was based on a small photograph I had taken years before in a dilapidated museum in Niagara Falls NY. It shows a display case fallen into disrepair, full of dried-up neglected specimens. I painted them as such, with protruding ribs in stiff stilted postures. The title “Still Death” is a parody of the classic painting term for an arrangement of objects, “Still life”.

6- Why do you continue pursuing an artistic practice and what would make you stop?

I’ve been asked, “what would you do if you were not an artist?” Which is tantamount to asking “what kind of a tree would you be?”. I do not know any other reality other than being who I am and if that is an artist, I accept my fate. To fight my natural instincts to create art would be anathema to me. Short of complete economic collapse resulting in me having to get a job at McDonalds to join the French fryin’ legion, I will never stop making art.

7- How many hours a day do you spend working or experimenting on your art?

My days are devoted to artistic hedonism. In the mornings I answer emails and either gather reference, work on designs, or meet with clients before spending some time in the garden and heading off to my studio located along the main street in Taos, New Mexico. The rest of the day is consumed with cutting, shaping and welding sculpture. In the evenings I try to work on marketing and sales. An artist’s work is never done. People have the idea that artists rush into the studio when they feel the inspiration, but it just doesn’t work that way. You have to go into the studio like a job. You have to be disciplined to make things happen.

8- How do you give exposure to your art? (through gallery representation, competitions, etc) And how much of your time is spent dealing with that aspect of your career?

When I see the popularity some artists have attained, I think, “there, but for the lack of media exposure, go I.” Marketing may be as important as the work itself. It’s like a farmer bringing his vegetables to sell at market, if they had remained in the fields un-picked, no one would have the opportunity to buy them. An artist must get out of the studio, bring his work to market, get it seen and put it in the public eye in order to be viable. For example, last year I obtained sponsorship to create three monumental Cor-10 steel sculptures to be installed on the streets of downtown Albany NY near the state capitol. The resulting trio “Parallax Sculptures of Man” brought my public work to a new level and opened the door to other opportunities. Since moving to New Mexico earlier this year, I have galleries representing my work both here in Taos and in Santa Fe.

The web has become an immensely powerful tool for gaining exposure to an international audience and I have shifted a good portion of my resources from shows to developing an online presence through my website, www.donsculpture.com.  As a result, I have been discovered by clients around the world including a museum in Seoul Korea and an art dealer in Singapore who is brokering a commission for me to create several ambitious installations for a new hotel there.

Sisyphus was commissioned by TV talk show host, forensic psychologist Dr. Keith Ablow for the courtyard of his writer’s cottage in Newburyport Massachusetts. Based on an original concept by Keith, it is a life size human figure straining to hold several large granite slabs from falling. I named it from the myth of Sisyphus, a sinner condemned in Tartarus to an eternity of rolling a boulder uphill then watching it roll back down again. 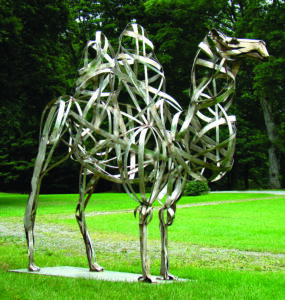 10- And “Camel”? What technique did you use for this piece?

Created for the 2006 Palm Beach International Sculpture Biennale, this piece depicts a life scale bactrian camel, native to the steppes of north eastern Asia, rendered in stainless steel. The “birds nest” technique involves weaving strips of stainless steel around one another and welding them into position. It produces a gestalt visual effect that has both mass and solidity, but also a measure of transparency.