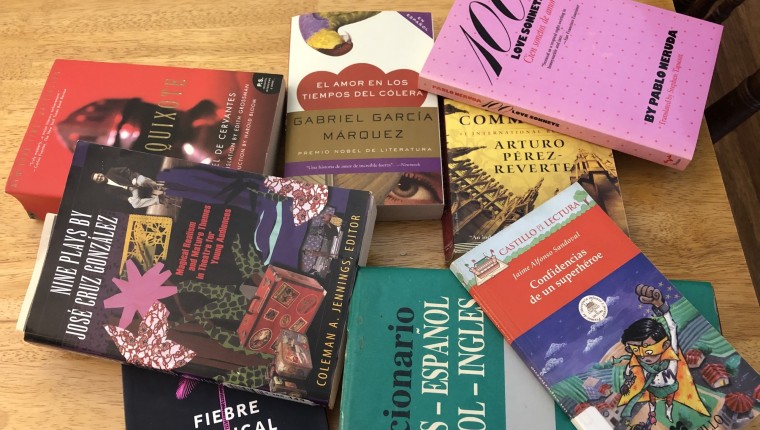 . . .
Rosa Rodriguez, who isn’t hearing impaired herself, has been listening to the needs of the deaf community ever since first volunteering at a church in the city of Cayey in her native Puerto Rico. The pastor, who became a mentor to Rodriguez, had lost his hearing when he served as music director at a Tennessee church. He and his 30 parishioners, who were all deaf, taught Rodriguez sign language.

Before moving to the Tampa Bay area, Rodriquez worked with the Tennessee School of the Deaf and received a Masters in Rehabilitation Counseling for the Deaf from the University of Tennessee.

During the 2016-17 Tampa Bay Lightning season Rodriguez was honored as the 24th Lightning Community Hero for her volunteer work with the Tampa Bay deaf community, which has included aiding in the founding of the Pinellas Public Library’s bilingual-bicultural Deaf Literacy Center in Safety Harbor (the deaf community’s cultural, educational and social center), launching American Sign Language classes for the hearing public at the Palm Harbor Library, and working at the Pinellas Public Library Cooperative as general coordinator of the Deaf Literacy Center.
. . . . . .
The Safety Harbor center, the only of its kind in the state, offers services for the hearing impaired such as computer classes, book clubs, literacy courses, tax advice and aid in becoming a citizen.

The first American Sign Language classes teaching the hearing public how to sign began in Pinellas County 23 years ago at the Safety Harbor library, but in 2004 Rodriguez noticed that none of the librarians at the Palm Harbor Library knew how to sign so she launched ASL classes there. ASL classes are now available at many libraries throughout Pinellas County. Rodriguez also teaches ASL at the Clearwater and Tarpon campuses of St. Petersburg College.

“Rodriguez continues to touch the lives of deaf individuals throughout the Tampa Bay area. Whether it be scheduling deaf book discussions, partaking in deaf cultural and arts events, or encouraging deaf community members to take on lead roles at events, Rodriguez never ceases to amaze others by going above and beyond to help those around her,” the Lightning citation read.

Since then Rodriguez has taught communication skills to hundreds of families with deaf members and taught sign language to thousands in the general public.

Rodriguez donated the $50,000 she received from the Lightning Foundation and the Lightning Community Heroes program to the Pinellas Park Library Cooperative, the Safety Harbor Public Library Foundation, Blue Butterfly Productions–Theatre eXceptional (a theatre company for, about and including adults with disabilities) and REVolutions Dance (an inclusive mixed-ability dance company).
. . .

. . .
Science fiction has been present in Latin American literature as far back as the 18th century, but at the end of the 20th century the genre exploded there as Latin American sci-fi authors began to develop a unique, transnational niche in the global sci-fi community.

Happily, that niche has been well-documented and preserved at the University of South Florida in its Special Collections archives.

In 1970, a decade after opening its doors to researchers and students, the Tampa Library at the University of South Florida launched The Science Fiction & Fantasy Collection. Gathering resources for the study of sci-fi and fantasy in general, the collection also included a special section on Latin American science fiction.

The Special Collections now holds a comprehensive collection of science fiction from Cuba and a representative sampling of works from Argentina and Mexico. Also archived are a number of examples of small press publications which are difficult to find in the United States – but have formed the backbone of the Latin American science fiction explosion.

Among the publications archived in USFs Latin American Science Fiction Collection are Quibit, a Cuban e-zine featuring stories, fragments of novels, and film reviews, often with a thematic focus on cyberpunk – and Disparo en Red, a Cuban e-zine featuring theoretical articles on science fiction as well as new work by emerging Cuban sci-fi writers. USF Libraries also publish an open-access journal called Alambique devoted to scholarly research and criticism in the fields of science fiction and fantasy originally written in Spanish and Portuguese.

Special Collections archivist Andy Huse, specializing in Florida history, has a book coming out next year which offers another slice of Latin America – The Cuban Sandwich: A History in Layers. Dubbed Tampa Bay’s resident historian, Huse co-authored the book with former Tampa Tribune food writer Jeff Houck (who is now now marketing and public relations manager for the Columbia Restaurant) and USF professor Barbara Cruz (see Literary Latinx: Four Writers and an Editor). Last year Huse worked on a book by a Havana writer who came to Tampa, West Tampa and Ybor City in 1896. The book, Tampa: Impressions of an Emigrant, was translated into English by Huse’s USF colleague Noel M. Smith.
. . .

Impressions of an Emigrant
Wooden Sidewalks and the Difficult Job of Lector
. . .

While at a conference in Havana in 2001, Noel M. Smith was asked by a Cuban writer to deliver a book to his son in Florida. She never connected with the son, but she did read the book – Tampa: Impressions of an Emigrant by Wenceslao Gálvez y Delmonte, published in 1897. Gálvez, a baseball player, lawyer and journalist, had fled Cuba and emigrated to Florida in 1896 to escape the violence engulfing his country during its war of independence.

Written in a style known as costumbrismo, a dominant form of personal narrative writing in Spain and Cuba in the 18th century, the slim book is a series of vignettes that focus on detailed descriptions of everyday life in Gálvez’s new surroundings – Tampa, West Tampa and Ybor City at the end of the 19th century.

Arriving in Tampa Bay from the then far more sophisticated city of Havana, Gálvez comments, for example, on how impossible it was to get a beer on Sunday and on the city’s buckling wooden sidewalks.

In two of the chapters he writes about lectores, those who are paid to read to the cigar workers in Ybor City’s cigar factories. In one he is auditioning to be a lector himself (he doesn’t get the job). In another he finally has landed the prestigious position but describes how difficult it is, from putting up with the smoke from the workers’ cigars to the difficulties of getting paid.

This book needs to be translated into English, thought Smith.

Smith, who has translated catalogs, essays, poetry, mysteries and even a libretto, was the perfect person for the job. For nearly 20 years, she worked on translating Gálvez’s book when she could get time off from her day jobs, first as a graphic designer and educational programmer for USF’s Graphicstudio-Contemporary Art Museum and then as curator and, for the past five years, deputy director and curator of Latin American & Caribbean Art at the University of South Florida Contemporary Art Museum.

Finally, at the end of last year, with the help of her friend and colleague Andy Huse, archivist at the USF Special Collections, Smith published her translation of Gálvez’s book with the University Press of Florida. In addition to translating Gálvez’s quirky account of his immigrant life, Smith wrote the autobiographical and literary notes for the book’s introduction while Huse added a scholarly and historic context. Both worked on the book’s extensive footnotes.
. . .

. . .
Translating the author’s unique voice was challenging, she told the Tampa Bay History Center in an online interview in January. “I guess that’s one reason it took so long.”  In the interview, available on YouTube, you can see the sparkling gown and crown that Smith wore at age 16 as queen of the Latin Fiesta displayed in the center’s Ybor City gallery.

Smith, who was born in Tampa, says that her ties to Cuba began “in utero.” Her mother had two uncles who worked in Cuba and the family visited them every year. “The last time she visited Cuba she was five months pregnant with me,” Smith told Creative Loafing in 2015. “I didn’t know that the first time I was there in 1999, but the air, the sun, the streets and the smells of the city were somehow familiar to me.”
. . .

. . .
La Gaceta, the only trilingual newspaper in the country, was founded in 1922 by Victoriano Manteiga who came to Florida from Cuba in 1913 to work for the Morgan Cigar Factory in Ybor City as a lector. As a paid reader, Manteiga read newspapers in Spanish and in English, as well as classic literature (such as Don Quixote and The Count of Monte Cristo) to the Spanish, Cuban and Italian workers rolling cigars in the factories of West Tampa and Ybor City.

La Gaceta originally was published only in Spanish. English and Italian sections were added in the 1950s when Victoriano’s son Roland took over.

Now a third generation Manteiga, Patrick, heads up the trilingual weekly. In addition to his editor-in-chief duties, Patrick writes the newspaper’s political gossip column, “As We Heard It,” launched by his politically minded father.

In 1988 Patrick’s mother, Louise “Peggie” Schmechel (she and Patrick’s father had divorced in 1969) was hired by her son and ex-husband to work at La Gaceta as the bookkeeper. She worked there as the office manager until her retirement in 2019. She died at age 88 in February. “You couldn’t have anyone better to watch after your money than your mother,” he told the Tampa Bay Times who called her “the heart of La Gaceta.”
. . .

Students throughout Tampa Bay from kindergarten through high school can celebrate Hispanic Heritage Month by creating original visual artwork or writing essays — and win prizes to boot. They do not need to be of Hispanic descent to participate. But hurry, the deadline is near for these two opportunities. . .

Florida’s governor and first lady are sponsoring an art contest for young Florida students (kindergarten through 3rd grade) and an essay contest for elementary, middle school and high school students (grades 4-12) attending any Florida school (public, charter, private, home or virtual). The deadline for both is October 11.

Here are the contest rules, guidelines and waiver form for the visual art contest in English and in Spanish.

For the essay contest there is an online form and a form for a paper submission. Winners of the essay contest will receive a four-year Florida College Plan scholarship provided by Florida Prepaid College Foundation. For more information, you can contact Volunteer Florida at (850) 414-7400.
. . .

Information and entry forms are available here. Winners, who will be announced by November 29, receive art packages valued at up to $200. Students do not need to attend school in Hillsborough County or be of Hispanic descent to participate.

The library is also holding a free 5-week literacy series
for families aiming to expand their English vocabulary,
a month-long free online Teen Lit Fest which continues
throughout October – and Bilingual Storytime videos.

Online Programs via the Library of Congress

Children’s and YA Latinx Literature
October 11 at 6 pm Catch the new recordings in the PALABRA Archive Research Guide, plus a wealth of poets and writers from South America, Central America, North America, the Caribbean, Europe and Africa.

Look out for the release of more research guides related to Hispanic Heritage in the United States. Curators and librarians in the Hispanic Reading Room have also created and published a host of thematic StoryMaps celebrating Hispanic heritage, history, and culture.