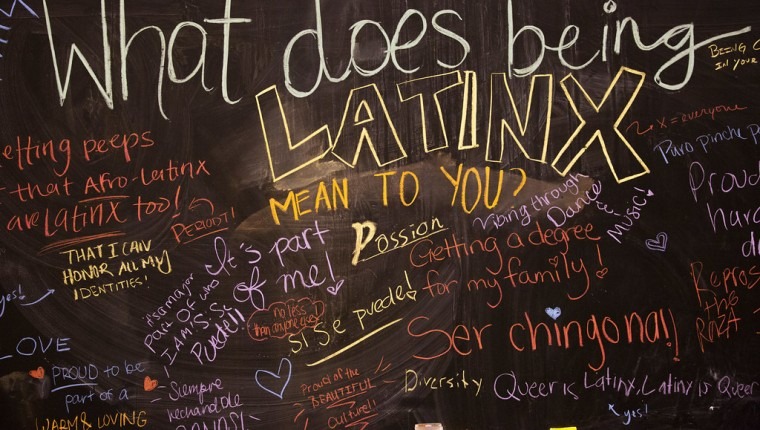 Four Writers and an Editor

Hispanic Heritage Month began on September 15. Although most people applaud the idea of celebrating the contributions of Latin American immigrants in the U.S., not everyone likes the label Hispanic. Too colonial. Instead, they prefer the more inclusive Latinos or Latinas (which encompasses all South Americans, including Portuguese speakers) or the more gender-neutral Latinx.

Labels can be tricky. Spanish explorer Juan Ponce de Leon gave our state its Spanish-sounding name La Florida because he landed here on Easter (known as Pascua Florida in Spanish). But why was Hernando County named after a Spanish explorer more than three centuries after Hernando de Sota actually set foot here? In Pinellas County two places have Spanish and Portuguese names, but neither received them from Latin Americans. Largo means long in Spanish, but that city was named for a nearby lake (drained in the ‘30s) which most likely got its name from Largo, Scotland, the origin of many of the early residents. Madeira Beach was named after the Portuguese island off the coast of Africa by a developer named A. B. “Bert” Archibald. Back then the area was covered with woods and Madeira in Portuguese means wood.

One thing is claro though – Latinx immigrants and their descendants have contributed greatly to this area’s literary life. In the spirit of Hispanic Heritage Month (or what I’m calling Literary Latinx Month), which runs through October 15, I am compiling a list of local Latinx literary treasures to celebrate. Here are my first five – four writers and an editor.
. . .

1. LORRAINE MONTEAGUT
Brujas and the Magic and Power of Witches of Color

. . .
A second-generation Cuban born in Miami, Lorraine Monteagut will talk about her new book, Brujas: The Magic and Power of Witches of Color, with Colombian-American poet Gloria Muñoz at Tombolo Books in St. Petersburg on October 7 from 7-8 p.m.

Brujas chronicles the magical lives of Afro-Latinx immigrants and indigenous Americans who have practiced witchcraft and ancestral healing.

These spiritual practices of healing rituals aimed at empowering young people of color are experiencing a resurgence. Inspired by her great grandmother, who was an espiritista in Cuba, Monteagut herself organizes astrology workshops and moon circles in her local yoga community in Tampa.

Monteagut began her research on bruja feminism and the reclamation of ancestral healing traditions at the University of South Florida where she received a PhD in communication.

Brujas – a conversation with Lorraine Monteagut at Tombolo is free and open to the public. Registration is not required, but RSVP is suggested.

. . .
2. GLORIA MUÑOZ
The Poetry of Translation

. . .
Recently awarded Lumina’s Multilingual Nonfiction Writing Award, Colombian-American writer Gloria Muñoz is an advocate for multilingual writing, both in nonfiction and in fiction.

In her latest book of poetry, Danzirly/Dawn’s Early, published this year, not only are her poems offered in both English and Spanish, but within the poems themselves the two languages intermingle and play off each other. Here are excerpts from both versions of the poem that gives the collection its title which is based on a poetic mishearing of the sound of language:

…Oh, say can you see by the danzirly light? Yes,
danzirly. When learning the anthem, he claimed this adjective
as the most glorious exclamation in the English language.
He greeted strangers at the grocery store with:
What a danzirly day! The afterglow of sunsets, danzirly;
the trailing of hysterical laughter, danzirly…

Danzirly/Dawn’s Early was awarded the Academy of American Poets 2019 Amboggio Prize which honors American poets whose first language is Spanish. The winner is published by the University of Arizona Press. At the book’s launch sponsored by the Academy of American Poets and the University of Arizona Press, Muñoz read from Danzirly while her father, Al Muñoz, read original Spanish versions of the English translations.

A translator herself, Muñoz teaches creative writing at Eckerd College. Among her many awards, she has received a Las Musas Mentorship for Latinx and nonbinary authors, a University of South Florida Humanities Poetry Award, a St. Petersburg Arts Alliance grant and a Creative Pinellas Professional Artist grant.

Poetry isn’t her only talent. She is one of three founders of of Pitch Her Productions, a nonprofit production company formed for the purpose of promoting women in the film industry, and she’s one-half of Moonlit Musíca, a bilingual songwriting team.

You can explore the work of Gloria Muñoz here

. . .
3. MARIA CARRILLO
Co-host of WriteLane,
a Podcast about the Craft of Journalism

. . .
On October 6 from 7-8 p.m. at a virtual event sponsored by Tombolo Books, Tampa Bay Times journalist Lane DeGregory and her editor Maria Carrillo will be interviewing Washington Post reporter Eli Saslow, author of Voices from the Pandemic: Americans Tell Their Stories of Crisis, Courage, and Resilience, a collection of interviews conducted across the United States.

Carrillo and DeGregory, who worked together on DeGregory’s Pulitzer-Prize winning story  “The Girl in the Window,”  are co-hosts since 2017 of  WriteLane, a podcast about the craft of journalism. As Lane pointed out in an article at poynter.org announcing the podcast’s move to that site last August, together they have a combination of 70 years of journalism experience,

Carrillo, who has edited dozens of award-winning projects, was born in Washington D.C. two years after her parents left Cuba in exile (her Twitter handle is @havana58). A frequent lecturer on the subject of narrative journalism, she has been a Pulitzer Prize juror six times.

DeGregory describes herself as “a listener, a writer, a podcaster” who “loves embedding in strangers’ lives and sharing their stories.”

WriteLane features informal conversations between the two women about the process of journalistic writing – finding ideas, the art of interviewing and how to structure a project. Sometimes they interview guests on the podcast, award-winning writers like Saslow (who also has won a Pulitzer), editors, photographers, teachers and judges of journalism contests. On the new Poynter site, WriteLane has organized the podcasts under such subject headings as writing, interviewing, editing and individual stories. Links to articles that are referenced are included, as are some tip sheets.

“I grew up speaking Spanish at home, thanks to my Cuban parents, and my kindergarten teacher at Pixieland once complained to my mom about my poor English,” Carrillo writes in her Tampa Bay Times bio. “I caught up quickly, though. Became a journalist because I love words and couldn’t believe someone would pay me to string them together. Now I get paid to edit stories that usually take a lot of time and effort. Mostly, they run on Sundays. I moved to St. Pete from Houston and to Texas from Norfolk, VA. Apparently, I’m drawn to swampland and places that attract hurricanes.”

You can explore the work of Maria Carillo here

. . .
4. BARBARA CRUZ
The Secret Life of the Cuban Sandwich

A professor of Social Science Education in the Department of Teaching and Learning at the University of South Florida, Barbara Cruz has published a number of children and young adult books, but her next book promises to be her tastiest – The Cuban Sandwich: A History in Layers, due out from the University Press of Florida next year. She co-authored the book with USF archivist Andy Huse and food writer Jeff Houck.

Last week the three authors spoke at a virtual event celebrating Latinx Heritage called The Secret Life of the Cuban Sandwich. The event was sponsored by USF Libraries, Yelp Tampa Bay and Lunchpool.  During the virtual pre-networking party, I “sat” with Cruz, Houck and others at a table in a Yelp visualization of La Segunda, a historic Tampa bakery and cafe that was one of the night’s sponsors. Discussions of whether Cuban sandwiches needed to be pressed or not, which ingredients were best and which local places served the most authentic ones were heated. Locals gave shout outs to the Columbia, the Boozy Pig and La Segunda.

“The sandwich evolves,” the Cuban-born Cruz stressed in her presentation, pointing out she has seen versions of it from Huntington, West Virginia to London. As to the Cuban sandwich rivalry between Tampa and Miami — she called the cities “sandwich siblings” — she admits that she prefers the Tampa version with its more “toothsome and chewy” bread while her sister favors the Miami variation. Self-described  as “food obsessive and Cuban obsessive” (she came to the U.S. at age 5), Cruz cautioned against shortening the sandwich’s name to just Cuban. Imagine her shock, she said, when she arrived in the U.S. and someone said they were going to stop and pick up some “Cubans.”

Cruz’s other books include César Chávez: A Voice for Farm Workers, Alvin Ailey: Celebrating African-American Culture in Dance, School Shootings and School Violence: A Hot Issue, School Dress Codes: A Pro/Con Issue and Multiethnic Teens and Cultural Identity for which she received the Carter G. Woodson Book Award from The National Council for the Social Studies (NCSS).

In her scholarly research Cruz also concentrates on multicultural issues. She currently is working on a project called “The Art of Teaching: Innovations in Social Studies Teacher Preparation,” which includes an investigation of teachers’ use of contemporary art in their teaching.

You can explore the work of Barbara Cruz here

. . .
In Yuly Restrepo Garcés’ short story “Pablo Escobar” a recent immigrant is befriended by a schoolmate with a wildly dysfunctional family.

Restrepo knows what it’s like to be an immigrant. Nearly 20 years ago, she came to the States from Medellín, Colombia as an asylee, a person seeking political asylum. Now she is an English professor at the University of Tampa.

“I could hardly remember a time when one of my family members or close friends wasn’t dealing with alcohol or drug addiction, how inconceivable it seemed at times that some of them would accept they needed help, how one person’s addiction affected so many others, and, for those who got sober, how difficult it was to forgive themselves,” she wrote in an essay describing how she wrote the short story “The Decedent,” which appeared in PRISM International’s Winter 2018 edition. “That was also around the time when a bunch of television shows kept killing off their queer women for what mostly seemed shock value, and that made me determined to write a story that raged against that.”

Restrepo began writing “The Decedent” in May 2015 at the Fort Lauderdale airport during a seven-hour layover (although she had been thinking about it for at least a year before that). “I wrote about twelve pages while I waited for my flight to Medellín, where I would spend the summer months visiting family and working on a rough draft of my novel-in-progress,” she says. She finished the story in the early months of 2016.

Why does she write? She asked herself that question in one of her blogs written as part of her Creative Pinellas Emerging Artist grant – “I have never thought about my writing as something that could change the world, or me as a writer who has the capacity to do something of that magnitude. It feels quite intimidating. This is not to say I don’t believe art is powerful. Of course I do. Otherwise, I don’t think I’d be an artist. But perhaps my motivations and goals for my writing are a little bit more selfish, or a little bit less interesting. I think, first and foremost, I write because I’m compelled to.”

You can explore the work of Yuly Restrepo Garcés here