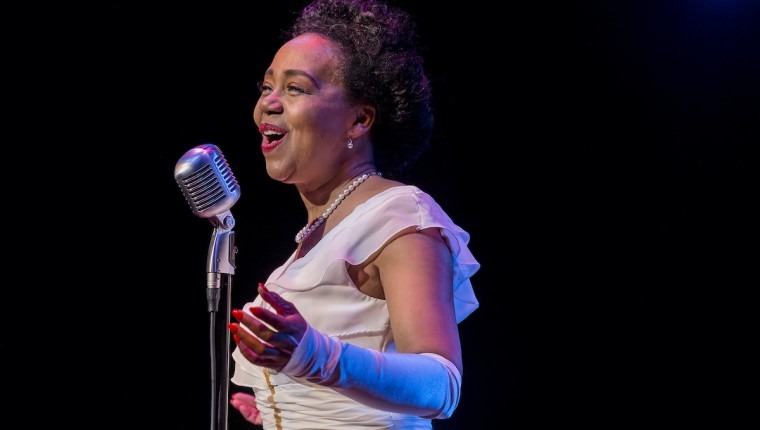 . . .
freeFall Theatre has brought Ebony Repertory Theatre’s L.A. production of Lady Day at Emerson’s Bar and Grill, a play with music by Lanie Robertson, to town.

Starring the luminous Karole Foreman, the play takes place in 1959, so we’re meeting the iconic songstress at the door of death (Holiday died in July of that year). She has lost her best friend, sax player Lester Young, earlier in the same year, and is giving what will soon be one of her last performances ever – at the not-so-upscale bar (which was actually listed in the Negro Motorist Travel Guide, or Green Book, as Emerson’s Tavern) in Philadelphia.

The evening feels intimate – it’s just us and Foreman/Holiday, and her lone accompanist, Jimmy Powers. Played by pianist Damon Carter, who fills the theater with his deft and dexterous piano skills, Powers is tasked with “handling” the songstress’s tumultuous journey through frustration, pain, vocal exultation, anger, humor, political astuteness, Black joy… and ultimate submission to her dependence on “the fix.”
. . . 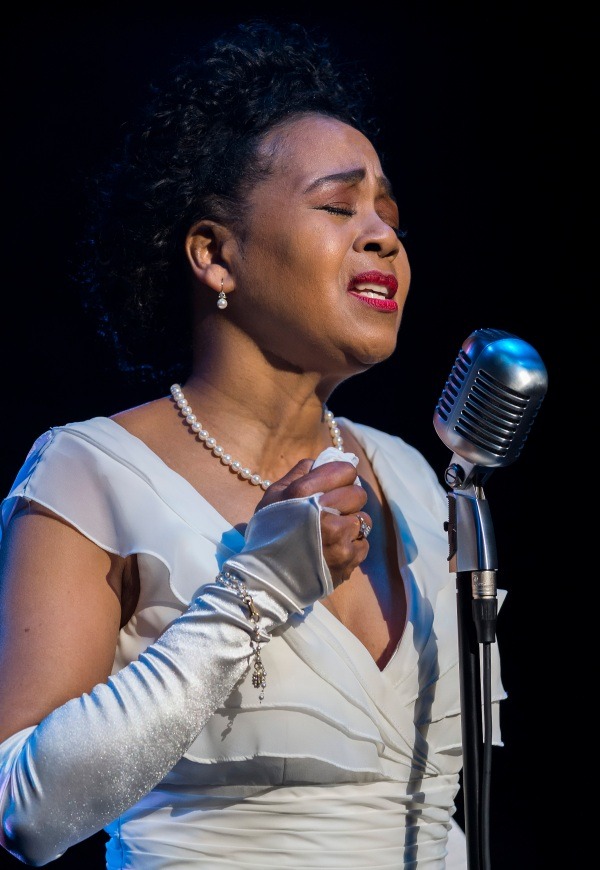 . . .
While Holiday was born in Philadelphia, the singer detests the place, and says so – for her it carries the memory of being tried for possession in a U.S. District Court after being arrested in a drug raid while she was staying at Philly’s Attucks Hotel. After over a year in prison, Holiday was released, but found her cabaret license had been revoked in New York for nearly a decade following – a large loss in income for the singer.

During that time Holiday was forced to perform and often live in Philadelphia – the play takes place during one late night performance, where, shares Foreman, Holiday is “working blue” – meaning, audiences could expect normal restraints on language and subject matter to be thrown to the wind.

The very nature of the play – its location and when it is set in her life – assures that the audience knows going in that it’s going to be a harrowing ending, and watching Foreman’s downwards tumble through the course of the play is fascinating.

“Her best friend Lester Young has died, right? So, she’s fresh from that – the death of a soulmate friend,” shares Foreman, discussing the timing of the show. “Grief. It’s going to be with you for a long time. Billie wasn’t allowed to sing at Lester’s funeral, by his widow. And Billie was devastated by that. And it’s said that on the ride home from the funeral, she turned to a fellow musician and said, I’m next to go – I’m going next. So that is, is what I have in my heart, in Billie’s heart.”
. . . 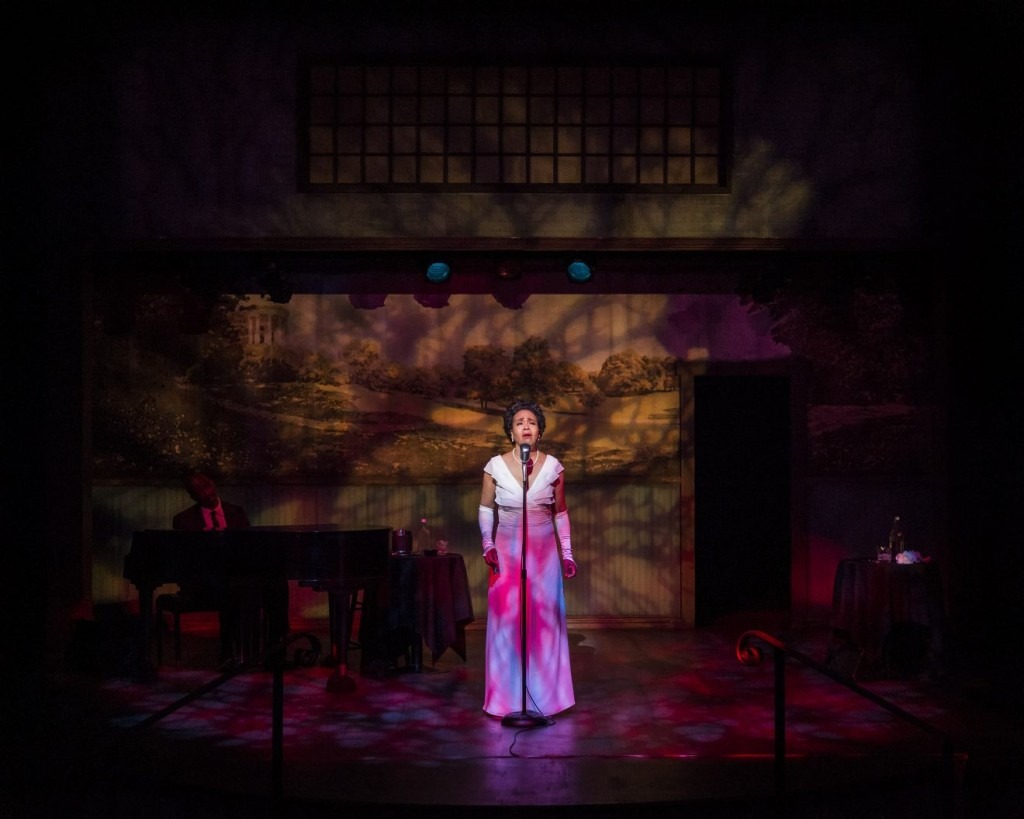 It’s also the actress’s delicate physicality, and her vocal attack on the legend’s musical voice, that helps channel a lovable and sympathetic Holiday. While playing the iconic chanteuse – after we’ve seen countless depictions of her – can be a tricky tightrope to pull off, Foreman’s Holiday manages to feel like a new version of the weathered but willful warrior queen.

Calling herself “a bit of a geek for research,” Foreman acknowledges reading and watching as much Holiday material as she could. “But I knew that I had to find my own way, and Wren and I were very clear that we didn’t want to do an imitation.” But with Holiday’s voice being so unique, the actress felt it was important to offer a fitting dialect and vocal quality.

“There’s the truth of her voice that’s undeniable and so particular and so distinct. So, I worked with a vocal coach, Denise Woods, who I met on the set of True Detective years ago and we became close – she’s Mahershala Ali‘s dialect coach. She also did the dialect work on the Underground Railroad. And I worked with an incredible vocal coach Michael Scott Harris, who’s a friend of mine, on finding Billie’s singing voice.”

Foreman performs over a dozen Holiday songs, including classics “Crazy He Calls Me,” “What a Little Moonlight Can Do,” “Don’t Explain,” “God Bless the Child,” and “Ain’t Nobody’s Business If I Do.”

Of course, the ever-chilling and powerful “Strange Fruit” – the song that caused Holiday to come under the vengeful eye of the Federal Bureau of Narcotics in the first place – is included in the evening’s repertoire. For the actress, Holiday’s treatment by the feds and the police who took away her cabaret card – and in that, her ability to make a living – illustrate both racism and “policing of Black and Brown bodies.”

“People like Thelonious Monk, even Satchmo lost their card – for maybe a year, two years. Billie lost her cabaret license for 10 years after her drug conviction – that’s the ability to make a living as a jazz artist. And the police had control over that.”

Foreman referenced Harry Anslinger, the head of the Federal Bureau of Narcotics, who went after Holiday in a well-documented ‘witch-hunt.” “It was to make an example out of her – she was constantly hounded by the feds. They would come to midnight shows, they would drag her off stage – lock her up under the assumption that, you know, she was using, or had drugs somewhere on her. Illegal searches and break ins – to really make this example of how jazz was destroying the moral fabric of society. We see the beginnings of really, the war on drugs.”

Foreman says it’s easy to trace the beginning of the propaganda machine against jazz and Black musicians. “African Americans being ‘creators of the downfall of our culture, the breakdown of the family’, you know… or anything they wanted to subscribe to us.”
. . . 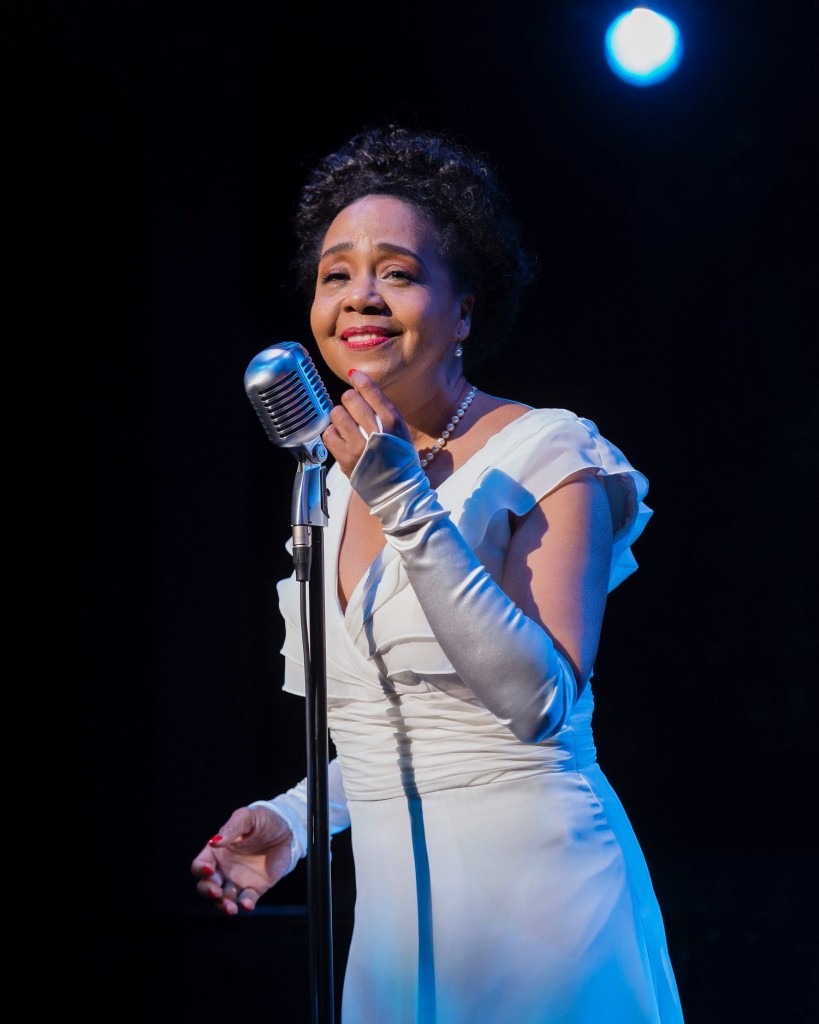 . . .
Lady Day at Emerson’s Bar and Grill is a less garish glimpse into the heralded and hounded singer’s life than the recent 2021 movie, The United States vs Billie Holiday. The play feels more immediate, and Foreman’s portrayal manages to maintain Holiday’s humanity, even as she becomes increasingly erratic.

“As an actor, just trying to find the flesh and the bones, the blood memory. This ancestor – I felt it was important just to give her space for her voice. It was really important to lend dignity to her story. Empathy for her humanity, respect for her vulnerability and strength. You know, she’s multilayered to me, she’s a human being. She’s complex.

“It’s nothing sort of triumphant for me to witness what she went through – knowing what we know about addiction now. I think, the story, the mythos that we’ve come up with of the drug-addled victim, that’s the narrative that the culture, the dominant, oppressive [culture], what they want us to believe about her – that’s sexy, for entertainment value. It’s still hard for all of us not to get caught up in that – to see this kind of hedonistic representation.”

“I don’t see her as a victim. I see her as a fighter. Most people would have been destroyed by that – obliterated. She was not.

“So, I want people to see her heart – and that, and especially as Black women, being vulnerable, I think, is very dangerous.”
. . .