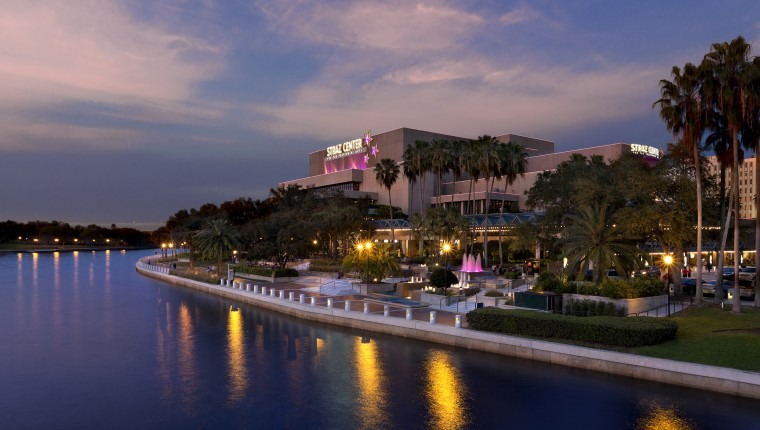 . . .
Without looking at the menu, Judy Lisi ordered the chicken and yellow rice. Most everyone who dined at the old Valencia Garden restaurant on Kennedy Boulevard ordered the same thing, and so did I.

Sipping her café con leche, she got right to the point of our business lunch – “So,’’ she said, “what do you think of an opera company in Tampa?’’

No, Lisi didn’t need my consent, as her idea had been percolating for quite a while. But she wanted reassurance from everyone – fundraisers, politicians, arts supporters, the media – that the improbable was possible.

Raising the curtain on grand opera in Tampa was ambitious, but looking back to that memorable lunch, Lisi seemed prescient. Fast forward nearly 30 years, and Lisi might be called prophetic.

“Well, you do have to be a little crazy to start an opera company,” Lisi says, reflecting on her first visit to the Tampa Bay Performing Arts Center, now the Straz Center. “But when I came here and walked into those theaters, I couldn’t believe it. I knew that opera could be part of Tampa.’’

It is this weekend, when Opera Tampa opens its 26th season with Offenbach’s Tales of Hoffmann. The company continues with Gilbert and Sullivan’s Pirates of Penzance in March, a double-bill featuring Puccini’s Gianni Schicchi and Mascagni’s Cavalleria Rusticana in April, and a carnival-themed fundraiser in May.

Then, Lisi will step down. At 75, she looks forward to retirement with her husband, Ernie, whom she married 52 years ago. She gives up the charged lifestyle of serving as President and CEO of the Straz Center and general manager of its resident opera company.. . .
. . .

. . .
When Lisi took over the center in 1992, she brought a vision for opera, based in part on her experience as head of the historic Shubert Performing Arts Center in New Haven, Connecticut. The new multi-theater facility in Tampa, which opened in 1987, was looking for someone not only with valid artistic ideas – Lisi was a Juilliard-trained opera soprano – but strong administrative skills.

“We had a big debt back then, and I remember saying to the board, ‘if I resolve the deficit, I’d like to think about starting an opera company.’ Everyone on the board said, ‘if you can solve the deficit problem, you can do anything you want.’ ’’

Those weren’t easy times for the struggling facility, and bringing in someone who had never set foot on Tampa soil was risky, says Paul Wilborn, executive director of the Palladium Theater in St. Petersburg.

“I was on a support board for the Tampa Bay Performing Arts Center when Judy arrived and it’s safe to say the center was on very shaky ground,’’ he explains. “People were worried that maybe Tampa wasn’t capable of supporting a center like this one. Judy pretty quickly turned it into the most vital arts organization in Tampa.’’
. . .

. . .
The “anything’’ Lisi was promised became Opera Tampa, which four years later launched Puccini’s Madama Butterfly. At a break during the company’s first-ever performance, an emotional woman approached Lisi in 2,500-seat Morsani Hall and told her she could never afford to travel to an opera in New York or Chicago. Now, it was here – at home.

“She came up to me at intermission, crying,’’ Lisi says. “She always wanted to see Madama Butterfly, and now she was able to, and that did it for me. People here need access to opera. They do now and it reaches their lives. That’s why I started Opera Tampa.’’

Since then, the company has produced or presented nearly 80 productions, concerts and recitals. The list includes an engaging Tosca in 1998, a tribute to Leonard Bernstein and his Trouble in Tahiti in 2002, the full score of Porgy and Bess in 2004, an atmospheric La Boheme in 2013, and four eclectic versions of Carmen over the years.
. . .

The company’s finest moment, however, came in 2001, when its conductor and artistic director – Anton Coppola – led the world premiere of his new opera Sacco & Vanzetti, receiving international media attention. Coppola died in 2020 at age 102.

“That was a high point,’’ Lisi says of staging it. “There’s nothing like doing a work for the first time and bringing all the creative forces together. It was magical, and a wonderful collaboration.’’

At times, critical reception could be uneven, especially with less frequently performed works. Bizet’s Pearl Fishers, for instance, was a worthy venture that fell short of expectations.
. . .

. . .
But opera isn’t cheap, and shortcuts are easily noticed. A typical Opera Tampa production can cost $300,000, with less than 40 percent covered by ticket sales. That’s why the Straz Center subsidizes its resident company by allowing it to operate under existing systems, rather than apart from them.

“Most opera companies have separate administration and marketing departments, but Opera Tampa uses what we already have in place,’’ Lisi explains. “We don’t need separate functions, so funds go directly to the productions themselves. And I serve as general manager, so I just put on another hat (trading her role as CEO of the center). I’d really like to see more arts groups around the country use that kind of model.’’

This model allows the 335,000-square-foot complex – the largest performing arts center in the Southeast – to better adapt to changes both physically and fiscally. It supports the Patel Conservatory, a learning center for young artists-to-be, and educational outreach programs with in-school artistic residencies and workshops that help fill the gaps in arts education left by budget cuts. Each year, these programs touch 1.2 million students.
. . .

. . .
Where the center once operated in the red, it now maintains a $70 million endowment and a $100 million capital campaign. Touring Broadway musicals, such as Jersey Boys and Hamilton, are audience magnets – and cash cows that help support other endeavors.

Getting all this done has been a daunting task that could fill a chapter in the history of Tampa’s culture life, says Sandy Freedman, Tampa’s mayor from 1986 to 1995.

“She’s had a monumental influence, and nobody else in my memory has had that kind of impact on the arts in Tampa,’’ she says. “She’s so knowledgeable, personable, and wired into New York and other cultural venues that her contribution is incalculable.’’

Lisi also has a knack for the less-colorful chore of raising money, adds Freedman: “She’s such a delightful person, so it makes it easy for her to fundraise and be a part of the community. She makes it all so natural.’’
. . .

. . .
Lisi credits her staff, as well as volunteers who have supported the center and the opera since their inceptions. The relationship between volunteers and management is critical to the success of the operation, says Lea Lavoie Davis, a member of the Opera Tampa League board of directors and chairman of its membership committee.

“She honors her volunteers,’’ says Davis, who served on the early Bravo Society in the 1990s. “She always encouraged us. She does everything with love and kindness and elegance, even though she’s a really strong manager.’’

Davis will be attending Tales of Hoffman and a season featuring members of The Florida Orchestra in the pit – a big plus on the artistic side. Even though Lisi will be leaving when the curtain goes down in May, Opera Tampa has enough support, grit and experience to stay vital, says Beryl Byles, who attends all its productions.

“It’s an opera company with pluck because it keeps reinventing itself,’’ Byles says. “It’s not a massive company with a massive amount of money, but they do what they can with what they have, and they do it very, very well.’’
. . .