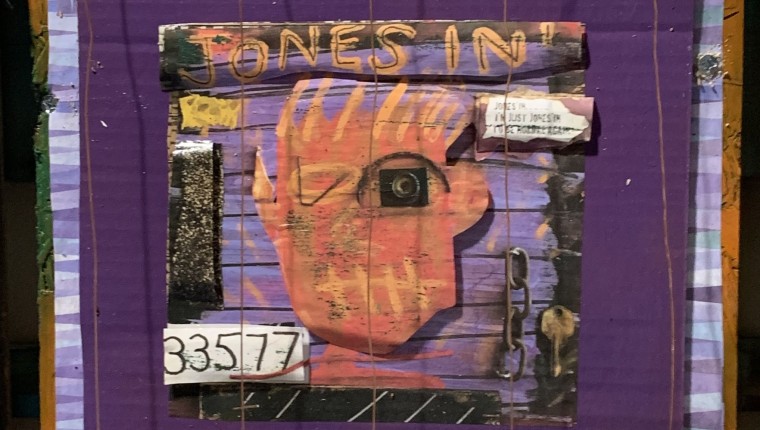 Story and Photos by Laura Kepner
. . .

. . .
In 2010, Ed Derkevics stood in a crowded Italian restaurant in Oldsmar, facing poets, musicians and comedians, all there for an open mic and some, for lasagna.

Derkevics’ voice projected over the background noise, with a poem about a man down on his luck. The poem was so descriptive of the man, the time, and his situation, that I can still see this fictional character sitting on the bus that Derkevics had created. Twelve years later, I attended the opening of Derkevics’ first visual art show, Jonesin’ at the St. Pete College Epicenter in Clearwater on September 15.
. . . . . .
Over the years, I’ve gotten to know Derkevics, his poetry, and his empathy for others. He’s written many poems about people he’s observed, people who forged an impression. But after at least a decade writing about them, he’s recently spent several years creating visual art – which in many ways, better depicts what his poetry has always touched on.

He calls his series Jonesin’ because he notices that side of our reality – people who are Jonesin’ for opportunity, for help, for understanding.
. . . . . .
Derkevics was raised in New York and says his art has a lot to do with his upbringing. “I started this as kind of a self-portrait. My parents were Eastern European refugees,” he says. “I befriended a lot of people who were a little outside of the mainstream. Some were struggling.

“Jonesin’ is an accumulation of that. My parents, they were outside of society a little bit. I’ve always noticed other people along the same lines. I saw a lot of homeless people, people who looked like they had given up.”
. . . . . .
Fifty-eight works are showcased at the Epicenter through December 10. They’re colorful, unique, and many caused me to stop, stare and really see what I imagine Derkevics wants us to see – a full spectrum of colors and piecemeal objects representing pain, desperation, and sometimes, fragments of hope.
. . .

. . .
“I have a studio — Ed’s Shed — which is a warehouse space with rusty parts, recycled wood, throwaway objects. People have given me a lot of items. I start with a blank slate and start thinking about someone I’ve known in a situation. Maybe a compilation of people.”

He uses repurposed wood. He sometimes acquires parts from an autobody shop. “Plumbers give me stuff,” he says. “I’m always drawn to special pieces of wood or electrical fittings that are unusual. When I see rusty washers, I get excited. . . a bunch of rusty nails in a bucket, I might say, whoa, this is good for hair.”
. . . . . .
Derkevics remembers sharing his first works with Jan Richardson, a renowned ceramics artist and instructor at St. Pete’s Morean Arts Center. “She told me I had a great idea. She encouraged me to make 50 of them — or 100 of them. She said see where it takes you,” he explains. “It’s taken me to places I never thought it would. It opened up my brain to all sorts of ideas.

“I don’t know if I had the same thought process when I first started as I do now. Every time I create a new Jonesin’ I think about people I’ve met, or different situations I’ve seen people in. I try to represent them. There is such a wide variety of people in need in our society. Everybody isn’t just a caricature of a homeless person or a desperate alcoholic or drug addict. People come to that situation from different circumstances and misfortunes.”

Before his opening, Derkevics walked with me down the long hallway where the Jonesin’ pieces hang. He stopped at a large black and white painting. “How do you get involved? What can you do? If each one of us does a bit more, maybe the solutions will become a little more apparent. Ignoring it certainly isn’t helping.”
. . .

Over 100 Attendees
Ready to Experience the Message

. . .
The Online Student Activities and Services Coordinator at St. Pete College, Medina Karagic, welcomed a line of people to the opening as Anne Parrette, a former member of the Florida Orchestra, encouraged attendees toward the exhibit with the beautiful mood of her cello. Photographs were taken, and Derkevics shook hands, hugged and mingled, talking to onlookers about individual pieces.
. . . . . .
Perhaps as unique as his paintings are the statements and statistics spaced between the Jonesin’ pieces. “I want it to be educational in the way that is a call to action, a spotlight, and have people think about solutions. What can we do? Can we do better?” Derkevics asks. “ I certainly don’t have all the answers — I want to emphasize the need for answers, better answers than we have right now.”

Nearing the end, Karavic addressed the crowd – the passion for this work and her part in it were apparent in her voice. Ben Leslie offered several perfect Haiku, and Jeremiah L. Woody performed thought-provoking spoken word.
. . .

The Jonesin’ show is a definite call to action, and the opening evening offered guests possible answers to the question “How can I make a difference?”

Anita Myers, Community Outreach Coordinator for the Guardian Ad Litem Program in the Sixth Judicial Court, spoke about the growing need for individuals to volunteer as a voice for a child. She asked that anyone interested contact her at Anita.Myers@gal.fl.org.
. . .

Dashon Mims of the Hidden Voices Program spoke about People Empowering & Restoring Communities (PERC), an organization to assist ex-offenders by addressing their needs through education and employment.

Mims also spoke about BeSMART, a program dedicated to educating parents and helping to keep kids safe in homes with guns.

Wanda Stuart represented Operation PAR, whose mission is “To strengthen our community by caring for families and individuals impacted by substance abuse and mental illness.” Their 24/7 access center can be reached by calling 1-888-727-6398. She also spoke on The Pinellas Wellness Connection, an alliance of behavioral health, mental health, and substance abuse care providers serving Pinellas County – yougoodpinellas.org.
. . .

Derkevics still runs a monthly open mic — this one called SHAMc Alive, the third Wednesday of the month at 7 pm at the Safety Harbor Art and Music Center. He also hosts a Facebook Live fringe show called Ed’s Shed and he will surely continue working to find answers to the questions about sharing his vision for helping fellow humans.

But as far as his visual art goes, it isn’t something he has planned much beyond today. He smiles and pauses for a moment. “This was in me. I had to get it out.”
. . .