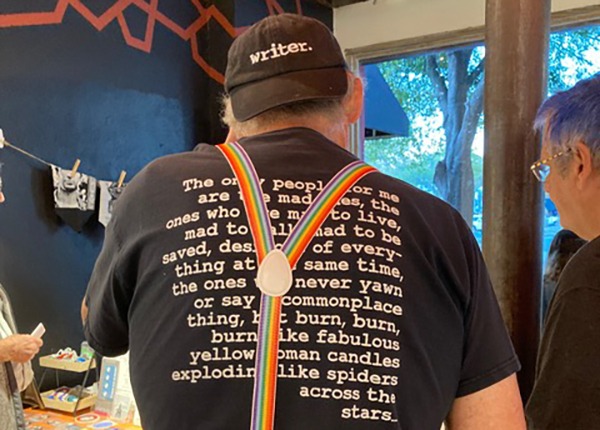 He died more than a half a century ago at age 47 in St. Petersburg – but, thanks to photographs and the work he left behind, he is fixed in our minds as that young man with a full shock of hair, seated on a poetry stool, reciting poems to jazz in San Francisco.

Whether we imagine him during his early years traveling by car across the country with “Dean Moriarty” (aka Neal Cassady) or slumped in an armchair in his St. Petersburg home in the last days of his life, wearing his ever-present plaid shirt, explaining why he dubbed his generation “Beat,” he is somehow timeless.

While we remember many of his contemporaries — William Burroughs and Allen Ginsberg — as old men, Kerouac remains that mad man on the road, forever burning “like fabulous yellow Roman candles.”
. . .

. . .
He is rediscovered every few years by a whole new generation, drawn by his spiritual vision of “crazy, illuminated hipsters suddenly rising and roaming America, serious, bumming and hitchhiking everywhere, ragged, beatific, beautiful in an ugly graceful new way.”  His reputation has even outlived the beatniks who embraced him as their inspiration — a regard he never returned. (“I’m not a beatnik. I’m Catholic,” he famously said, insisting that when he coined the word “beat,” he was thinking of the Beatitudes).

For years after Kerouac’s death at St. Pete’s St. Anthony’s Hospital, fans would show up in St. Petersburg with a paperback edition of On the Road in their back pockets (the novel still sells 60,000 copies each year) to visit his last residence. They would drop notes to him in the mailbox at his ranch house at 5169 10th Ave. N, then stop by Haslam’s bookstore (which was said to be haunted by Jack’s ghost) to buy more of his books (1/4 of Kerouac’s output was penned in Florida) and end the day knocking back a Jack Kerouac special (rot-gut whiskey and a draft beer) at The Flamingo, the bar on 9th Street N. where legend has it that the Beat poet had his last drink.
. . .

. . .”
For years Jack’s telephone number was listed in the St. Petersburg directory. For years his house was left vacant by his Greek in-laws from Lowell who had inherited it through Kerouac’s third wife, Stella Sampas. For years members of a local group — The Friends of the Jack Kerouac House — kept up the property, trying to convince the city to turn the place into a writer’s retreat.

Now Jack’s house has been sold, remodeled (emptied of any trace of Kerouac) and resold to a retired literary professor and his wife. Haslam’s is closed — it shuttered its doors at the beginning of the pandemic and may never open again. And there still is not a single official plaque or street sign in St. Petersburg dedicated to Kerouac. Only the mural on the side of the Flamingo and the giant photo of Jack on the bar’s facade stand in testimony to Kerouac’s connection to St. Petersburg.
. . .

. . .
But 100 years after the writer’s birth, people of all ages continue to celebrate his unique voice and story — as a series of local events celebrating his centennial amply demonstrates. Poetry readings. Screenings of the movie On the Road. A bike tour. And an art gallery show of Jack-inspired paintings, collages and sculptures at The Studio@620.
. . .

Find a virtual gallery of the exhibit following this story

. . .
Curated by artist James E. Hartzell, the Studio@620 show is filled with references to what mattered most to Kerouac – typewriters, jazz, and of course, books. A stool used in poetry readings greets gallery goers at the entrance. A whimsical sculpture of a musician holds a score that reads, “Beat Me Daddy, Eight to the Bar” (a 1940s song title in hipster slang, asking for a boogie beat).
. . .

. . .”
The original goal was to recruit a mix of 47 artists and poets for the show — one for every year of Kerouac’s too short life. Of the 37 works that finally made it into the show, seven sold on opening night, “which was very exciting,” says Hartzell.

An opening reception for the show on March 4 featured poetry readings (of course) backed by jazz (of course). The jazz combo — The Johnny Whyte Experience — included Jake Walker on bass, Rick Adams on sax and woodwinds, Johnny White on trumpet and flute, and Jim Steward on drums and percussion. Namaya, a performance artist and designer of the Agent Orange Project, was the opening poet.
. . .

. . .
The crowd that came to celebrate the Beat poet couldn’t be pinned down by age, race or gender – a man sporting a T-shirt emblazoned with Jack’s image and a hat marked writer, a young woman pushing her baby in a carriage, older couples, younger couples, and a woman with a backpack in the shape of a dog.

Even the entrants of the Jack Kerouac look-alike competition — aka The Beat Generation Costume Contest — which closed out the evening, were non-conforming. Two men and two women entered the contest – Austin Reale, a local metalworker, capped the win. A piece by Reale is included in the exhibit – a fleur-de-lis (in honor of Kerouac’s French-Canadian origins) made from old Pinellas County train tracks.
. . .

. . .
What is it about Kerouac that draws writers and artists alike to him? I asked Hartzell, who is president of the Friends of Jack Kerouac, the renamed group now concentrating not on his house but on his legacy.

“Kerouac still serves as inspiration to artists and writers partly because the themes of his writing have universal qualities, even for those who live 50+ years after the Beat Generation,” Hartzell tells me. “There’s a broad appeal to exploring themes of spirituality, adventure, non-conformity, connection and friendship that transcend national origin or time period.”

. . .
Here are some of the group’s upcoming Jack-inspired events
that celebrate his sense of wanderlust and connection
. . .