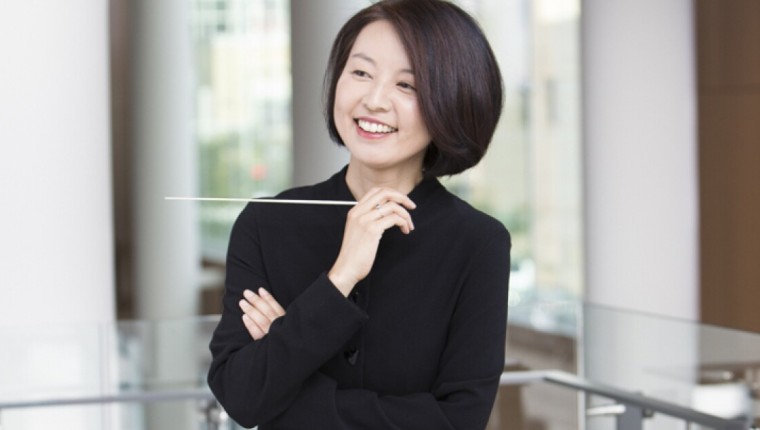 Akiko Fujimoto
It’s the music that matters, not the gender

. . .
When Marin Alsop stepped down as music director of the Baltimore Symphony Orchestra last summer, she left a fraternity.

With her departure, no woman leads any of the nation’s top 25 orchestras, although Nathalie Stutzmann will take over the Atlanta Symphony Orchestra in the 2022/23 season. This touches on the well-worn point of whether the classical music industry is in any way misogynistic and Euro-centric, and why men are preferred over women as wavers of the sacred baton.

Conductor Akiko Fujimoto downplays any controversy or indifference toward women. She sees more women and diversity than ever before, although for her sexism isn’t the issue – what’s important is how you make music.

“Conductors don’t even think about it, because it’s not up to us,’’ she explains by telephone from her home in Arkansas. “And the composer certainly doesn’t care if it’s a man or a woman conducting, just that the piece is well done.’’

. . .
Fujimoto serves as music director of the Mid-Texas Symphony in Seguin, and earlier this month was guest conductor for a Florida Orchestra masterwork program that included works by George Gershwin, Polina Nazaykinskaya and Sergei Prokofiev.

Fujimoto’s reputation as a stickler for musical discipline and creative detail keeps her active as a guest conductor across the country. Rarely does she encounter issues about gender.

“An orchestra wants you to be effective, nice, easy to work with and to know the music like the back of your hand,’’ she says. “I’m lucky that I was studying to be a conductor at a time when nobody was saying girls can’t conduct. People weren’t necessarily looking for women. That’s the generation I came up in.’’

According to a recent story in the New York Times, women have been poorly represented as orchestra leaders. However, that’s changing, the story notes, as more women gain a foothold as assistant and associate conductors and move closer to the role of artistic director.

“Now, a group of women could be on the cusp of breaking barriers in one of music’s most stubbornly homogeneous spheres: the male-dominated world of orchestral conducting,’’ the Times reporte.

Gender and racial disparities in classical music are topics among orchestra boards, which seek more women and minorities to fill their ranks, according to the League of American Orchestras. Currently, men outnumber women 10 to 1 as music directors among the 800 ensembles that belong to the League.

“When we program a season, our goal is to hire musicians of the highest quality who share our passion for great performances,” said says Cantrell, The Florida Orchestra’s president & CEO. “But we also strive to break down barriers. We connect audiences to a wide range of guest artists, composers and new music because that’s how we create the best, most meaningful concerts that resonate with our community.”
. . .

Jane Glover, music director of Chicago’s Music of the Baroque, said on the Chicago Symphony Orchestra website that it’s hard to believe anyone would think women aren’t capable of a top podium position. “The fact that we’re still having this conversation is sort of bonkers. It’s ridiculous that after all these years we’re still asking the question. It’s like saying women can’t run marathons.’’

Fujimoto has had plenty of time and experience to ponder the question. Born in Japan and moving with her parents to the United States, she earned a bachelor’s degree in music and psychology from Stanford University and master of music degrees in conducting from Boston University and the Eastman School of Music.

She studied under the acclaimed conductor JoAnn Falletta when Falletta served as music director of the Virginia Symphony Orchestra. Fujimoto became only the second woman to lead the Minnesota Orchestra, where she was associate conductor from 2017 to 2020. She made her TFO debut two years ago.

Her experience with ensembles around the country gives her a unique view of change within the music industry, but she remains adamant about change for the wrong reason.

“The flood gates are open and people are looking to shake things up in the gender department,’’ she says. “No, I’m not going to turn my back to that movement at all, because I think it’s wonderful to have a diverse roster of conductors. But I don’t think musicians are too concerned about it, and we need to caution ourselves not to push female conductors for anything other than their artistic merit. For gender to be the deciding factor, it might not yield a good result.’’
. . .

This story originally appeared on The Florida Orchestra blog.