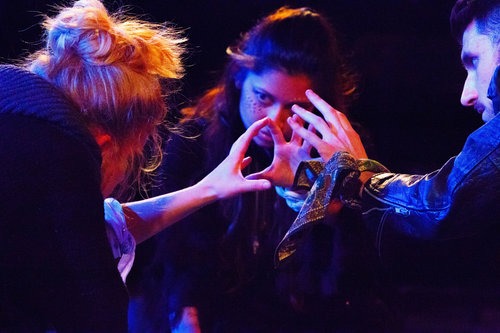 I read the play at least twice and take notes on theme, dramatic structure, character through-line and world of the play. I often revisit Elinor Fuch’s “Visit to a Small Planet” and use that text to guide my early reads. I write down my initial associations, feelings, thoughts and questions about the play. Next, I move on to research. If the play is set in a specific time or place, or surrounds a certain practice, I make sure to educate myself on those varying contexts. For example, when I was preparing to direct Rajiv Joseph’s “Animals Out of Paper” for Jobsite Theater, I learned about the incredible history of origami.

If directing a modern or classic play, I watch previous productions and read critical texts. When I was embarking on directing “Macbeth” for The No Name Collective in 2017, I read Freud’s engrossing interpretation of the leads. He believed Macbeth and Lady Macbeth two sides of the same person. This idea, as well as my obsession with queerness and gender-play in Shakespeare, inspired me to have the actress playing Lady Macbeth and the actor playing Macbeth switch roles after Duncan has been murdered.

Next, I revisit my first associations and allow my ideas to be further shaped by my research. After that, I begin to collect visuals and sounds/music that feel of the play world I want to embody. I like to do this prior to speaking with designers so that we can come to the conversation with our inspirations and find commonality among them.

In preparation for casting, I work with the producing team or company to create breakdowns specific both to the play and to my particular directorial vision. In the past I have worked with ensemble companies where I have cast both from within their talent pool and outside of it when necessary. This has required open communication and flexibility, while also bringing specificity about who I am envisioning for roles.

Finally, we arrive at the first rehearsal, my favorite time. It’s an exhilarating moment to build rapport amongst the company and boost excitement for the production. It’s been a practice of mine for some time now to start with folks sharing their pronouns, role, and some kind of ice-breaker that allows us to get to know each other better. I invite designers to join this first company meeting, and encourage them to share their design plan. I share my vision for the production and make space for others to weigh in and voice their interpretations. I value questioning, thoughts, or ideas from my team and am always willing to try out an idea in the room. I also think it’s important at the first rehearsal to establish channels for communication both with me and with the stage manager so that the actors feel supported should concerns or questions arise. Once all of this has been covered, we dive into our first read and open the floor for discussion.