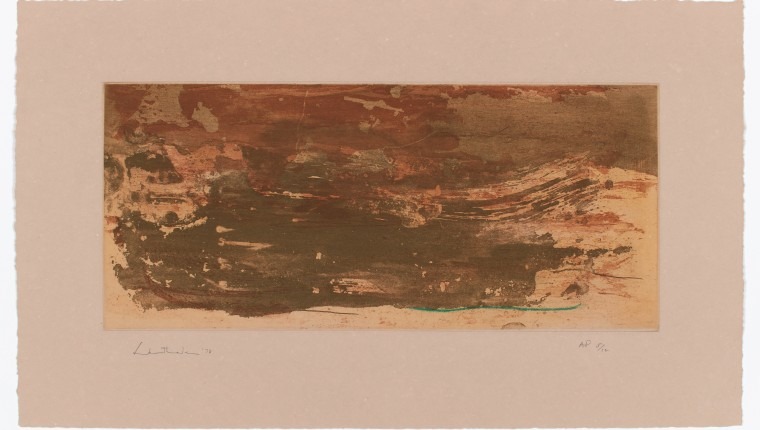 . . .
The Lyrical Moment exhibition currently at the USF Contemporary Art Museum (CAM) features the works of two artists – Helen Frankenthaler and Heather Gwen Martin. Can there be a more different pairing of two artists?

Probably yes, but in this case, while both fit the category of abstract artists, in a way The Lyrical Moment is an exhibition of two halves as the artworks representing each artist come off different routes and media, each speaking from a very different point in history.

The exhibition arrangement also lays out their identities in separate spaces – Frankenthaler in CAM’s West Gallery featuring her innovative prints, and Martin in the East Gallery with her marbled color field paintings.

. . .
Exhibition curator, Christian Viveros-Fauné does not attempt to make any correlations or connections, obvious or otherwise, but instead initiates a conversation, as he writes in the exhibition catalogue – “The encounter of these two artists provides an opportunity for intergenerational dialogue on the subject of abstraction – a genre that is as multifaceted as it is ageless. Less a meeting to trace the influences of one or another artist, the exhibition instead establishes what one might term a contemporary colloquy. Call it a rendezvous between rule-breakers.”

There’s this often repeated hypothetical social question – Of all the possible people, including historical figures, who would you invite to a dinner party? The follow-up question not often asked is what would you all talk about? This exhibition would be a snippet of the exchange between these two possible dinner guests.
. . .

. . .
Martin tells a story of her childhood – her mother giving her a bucket of water and paint brush for her to entertain herself by painting the sidewalk. This by chance is also a method the Chinese use to practice calligraphy without wasting paper, water and brush writing on pavement, a surface that can be used over and over as the Sun evaporates the water.

Frankenthaler’s parents recognized her talents very early and enrolled her in progressive experimental schools. At 15, she attended Dalton School in New York and studied under Rufino Tamayo, a Mexican painter and print maker who has been credited with putting Mexican modernism on the international map.

. . .
If you transport yourself to childhood days, spending summer afternoons mixing, splashing paint around, getting all messy pretending to be an artist – and you actually are an artist – at least according to this Picasso quote, “Every child is an artist. The problem is how to remain an artist once he grows up.” Here are two persons who grew up and continued to be artists with a capital A.

In the catalogue, Christian continues, paraphrasing Frankenthaler’s ‘no rule’ quote – “There are no rules. . . that is how art is born, that is how breakthroughs happen. Go against the rules or ignore the rules, that is what invention is about.”

And while thinking of childhood days, children are one group of people living in the realm of no rules – they have not yet learned them, and probably find rules making no sense even when they are explained. Every moment is the present moment, no thought about mistakes. A child thinks nothing of counting stars in the sky, however impossible that may be.
. . .

. . .
This may be the realm both Frankenthaler and Martin slip into with hours of solitude, mixing and applying paint, experimenting in the studio – the works find their own paths, outside generally accepted rules – and they flow with that process, riding along that edge, though now with the depth of more years lived.

Impetus for this exhibition originated with a gift from the Helen Frankenthaler Foundation of ten print editions and eight working proofs to the USF Contemporary Art Museum, as one of ten university museums selected for the Frankenthaler Prints Initiative to promote interest and understanding in the visual arts through the artist’s legacy.

Frankenthaler is known for her fierce independence, groundbreaking methods of painting where she worked directly on raw linen or canvas, allowing the paint to soak into the fabric weaves, giving the works an inner presence – and influencing other artists like Morris Louis and Kenneth Noland, both of whom had visited her studio.

. . .
Antithesis to her autonomy, print making is a collaborative process with a print atelier and at some point, the artist hands over control to the master printer. But as curator Ruth Fine who worked with Frankenthaler on her exhibition at the National Gallery in D.C. and served as adviser in the Frankenthaler Print Initiative, writes – “Printmaking in principle depends upon an indirectness rather than the spontaneity strongly associated with Frankenthaler’s paintings, but from the very start the artist devised ways of working on prints that sustained and supported that quality of spontaneity, leaving it to her printers and other collaborators to find technical means to meet her challenge.”

Frankenthaler fully embraced print making. The eight process prints from 1978 titled Earth Slices demonstrates this of-the-moment spontaneity and decision making spread over the print’s time-lagged stages, bringing in the spirit of inventiveness and experimentation in her painting practice, turning and bending print making rules that could otherwise be static.

The 18 prints from the initiative are enhanced by loans from the Tampa Museum of Art, the collection of Sarah and Mort Richter, and CAM’s own collection of Frankenthaler’s suit of five prints titled What Red Lines Can Do, the totality of which provide “. . . abundant opportunities for study and deep engagement” – Shannon Annis, CAM’s Curator of Collections.
. . .

. . .
Martin’s paintings require long views as well as close examination – the amazing edges between colors – and her small gouache paintings on paper are contemporary miniatures.

From pixel by pixel to brush stroke following brush stroke progression, it’s interesting that while some references and influences may be traced to electronic technology – partly because of growing up in this quick-paced digital age and partly because of having worked as an artist colorizing scenes on a computer screen for DC Comics – the paintings themselves are absolutely traditional, oil on linen, with color mixing, tactile, smell of paint chemicals, dexterity with brushes, feet on the ground, whole body engagement. As Martin describes “. . . the paintings evolve at a snail’s pace, almost a meditative process, and also extremely physical, like an endurance test.” A very different sort of labor from the keyboard’s gymnastic immediacy.

The resulting paintings are evocative of many things. Unlike Frankenthaler’s images which are more visibly layered, effervescent and like swirling clouds coalescing and dissipating, Martin’s are well defined, bright, solid individualistic shapes, with clean calligraphic lines, some like freeform marbleized paper patterns.
. . .. . .

. . .
The compositions feel almost cropped from something larger, easy to imagine the shapes and lines continuing beyond the canvas’s edge forming worlds of which the paintings are the zoomed-the in details, opposite of William Wegman’s postcard paintings, where he glues a postcard onto a much larger canvas, then extended the scene of the postcard on the canvas as if a camera’s zoom lens is dialing back, back and further back to capture the bigger picture.

A lot more can be said of both artists and their works, and a lot has been said about Frankenthaler – and in hindsight, a lot more should be credited to her for contributions in both the painting and print media, creating pictures of our existence in ways never before seen. And Martin, the protagonist in the midst of an adventure, like Tolkien’s hobbit marching along, facing fellow hobbits, elves, wizards, other allies, and a long list of nemeses. Who shall predict the turns of her path?

Many years ago I was served a dessert of chocolate drizzled over bacon, something I’d never had before or even heard of, something many chefs of that time had probably not yet considered – but what a delicious combination. Walking through this exhibition was experiencing what such an unlikely pairing can present.
. . .