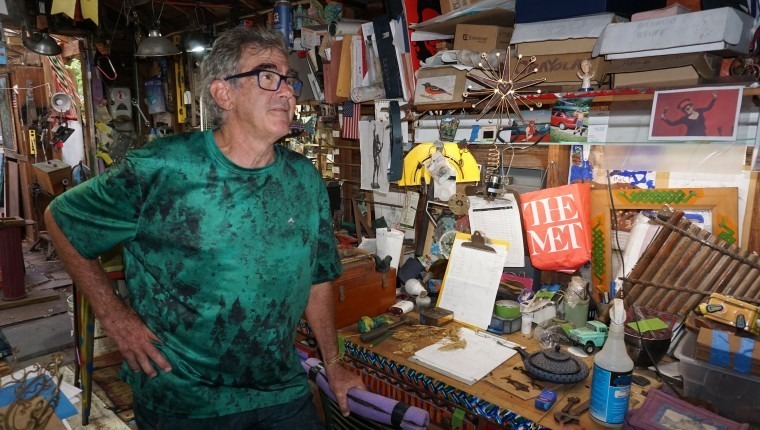 . . .
Now’s a good time to take away the summer doldrums by getting out and enjoying fine craft in air-conditioned comfort at the Florida CraftArt Gallery in downtown St. Petersburg.

FCA’s newest exhibit was announced in early July and opened in mid-August. Somehow, I missed the press release, went out of town and, sorry to say, missed out on the opening and several scheduled artists’ demonstrations. I hope that you’ll take some time over the next month to visit and talk to FCA artists, watch their work process in their “temporary workbench/studio” set up in the Gallery, and peruse completed work on display for sale. It’s a twist on the typical outdoor craft shows where artists demonstrate aspects of their craft practice onsite.

Sixteen Tampa Bay area artists were/are scheduled for demonstrations, 11 am-4 pm on specific days through October 15. You can find the schedule here.

The exhibit was conceived by longtime FCA member and collector Perry Everett, says Katie Deits, Florida CraftArt executive director. “Education is part of our mission, and there is no better way to learn about fine craft than by watching an artist at work.”

Artists were selected to exemplify every medium of fine craft carried in the gallery, according to Manager Julia Collver. “The artists get to teach their craft and share their passion in a professional and relatable way. The audience can ask questions while having a firsthand experience learning about the work it takes to complete a work of art.”

I did get a chance to chat with Fiber Artist Elizabeth Neily of Gulfport during one of her early demonstration days. She was weaving her handspun yarn on a portable floor rigid heddle loom. The loom itself is narrow, only about 15 inches wide, which means the finished woven piece would only be about 14 inches wide, suitable for a scarf or shawl.

Elizabeth, however, found a way around that.

Joyce was born and raised in St. Petersburg in a family that encourages recycling, creativity and nature, so it’s no wonder that “reuse-recycle-upcycle” is her work ethic.

She learned to sew, build and invent with all sorts of tools and materials. They had a lot of animals. She finally settled on papier-mâché and creates a wonderful family of humans, dogs, cats, rabbits, birds and other animals that live in a fantastical, happy and humorous world. She resides in Palm Harbor.

A contemporary sculptor and photojournalist, Shelly’s path to art is not typical. Her passion in examining ideas and life led her to a degree in Philosophy from the University of South Florida.

She hopes her sculptures, photography and writings encourage viewers and readers to examine the world in a different way. . . and can serve as an impetus for change.

Originally from West Babylon NY, Richard moved to St. Petersburg a few years ago, moving his pottery production studio with him. A functional potter, Richard loves the idea of making something homemade that becomes a part of someone’s everyday life.

The clay body he uses primarily fires at mid-range, but he also enjoys the processes of raku, soda firing and gas reduction firing. He is a 2017 Florida CraftArt Emerging Artist and was a featured artist for several years by Trinity Spotlight on the Arts in Atlanta.

Sue received a Bachelor’s of Fine Art degree from Massachusetts College of Art and after college apprenticed with Master Potters Michael Cohen and Harriet Goodwin. In 1981, she was awarded an Apprentice Fellowship in Crafts Grant from the National Endowment for the Arts.

A year later, Sue opened SMS Pottery in St. Petersburg. She is represented by American Craft Galleries throughout the United States and currently shows her clay work at SHAPIRO’S Gallery, her family-owned business in downtown St. Petersburg.

She works with a mid-range red stoneware clay with most of her work handbuilt from slabs of clay or extruded forms. Early inspirations that influence her work are tile work and carvings from ancient cultures, the geometric patterns found in Native American art, stylized art deco designs, mid-century modern designs and contemporary architecture.

September 23 from 11 am-4 pm
Tyler Jones, Ceramics on Wheel

Tyler is a proud sixth-generation Floridian raised in St. Petersburg. With a degree in theater and fine arts from the University of Central Florida, Tyler’s professional background includes creative endeavors as a clay artist, teacher, business development for a renewable energy company and a over a decade as a professional global real estate advisor.

While in college, he took a pottery class. He never let go of his passion for mud. Tyler has served as Program Manager for Creative Clay, Director of Sales and Marketing, and also worked in education at the Morean Arts Center. He has taught children’s art camp, workshops and adult classes at the Morean.

As founder of heARTworks Pottery, Tyler shares his love of art by giving back a portion of every sale to Florida CraftArt. He enjoys creating functional, everyday art because it can be used and appreciated daily.

Her Tango Dancer ceramic series was featured on HGTV’s That’s Clever and her work has been exhibited at the Museum of Fine Arts in St. Petersburg and the Tampa Museum of Art.

Kimberli is a founding member of the Tampa Tour de Clay, a board member of Florida CraftArt, and has served as a three-term past president of Las Damas de Arte, raising money and awareness for emerging artists in Hillsborough County. She is a member of the artist collective Creatives Exchange and resides in Tampa.

Michael’s use of the Tiffany method allows for intricate glass forms to be incorporated into equally intricate designs. His eye-catching artwork has graced church windows, art galleries, public institutions and private homes. He lives in St. Petersburg.

Matthew grew up in Marion IL, surrounded by nature in the Shawnee National Forest. He spent many years exploring the forest and cultivating a curiosity for natural beauty. After graduating high school in 2015, Matthew attended Oglethorpe University, John A. Logan and Southern Illinois University where he studied glassblowing under Nadine Saylor and Jiyoung Lee.

Graduating with a Bachelor’s of Fine Arts degree, Matthew moved to St. Petersburg in 2020 to participate in its ever-growing glass community.

A mosaic artist from Minneapolis, Laurie decided that she would be an artist at the young age of four! She attended the Commercial Art program at Hennepin Technical College, worked summers designing and painting signs and, after graduation, worked as an illustrator and then art director at an advertising agency.

But then in 1999, an evening clay class piqued her interested in hand-carved sgraffito. For 20 years she showed her work in the midwest. In 2011, she and her husband moved to Florida. Her ceramic work has been featured in Clay AKAR Yunomi Invitational, Florida CraftArt Gallery, Michael Kohler Gallery, Temple Beth-El and Tour de Clay. She was also a founding member of the Lake Minnetonka Art Tour.

In 2018 – on a fluke – she made a tile mosaic surfboard shower backer for her community condo pool area. Soon after, she was commissioned to make another. . . her mosaics took off from there. Laurie resides in St. Petersburg.

Eric left his home in Gulfport in 1973 to undertake an artistic self-education by moving to Washington DC. There, he worked as a bicycle courier and when not working, spent time studying art in museums, galleries and libraries.

He began a metal apprenticeship in Sperryville VA with artist George Anderson in 1977. He learned metal skills – the use of torches, pliers, cutters, grinders and shaping tools to fabricate art from bronze and copper. Eric began exhibiting at art and craft shows in 1979, returned to Pinellas County in 1995 and works from his studio in Gulfport. He recycles bicycle parts to make gates and other sculptural objects using the same techniques he employs in his jewelry. Eric has been exhibiting with Florida CraftArt since 2006.

You can find the schedule
of upcoming demonstrations here
. . .

A Meet-the-Artists and closing reception
is at 4 pm on Saturday, October 15