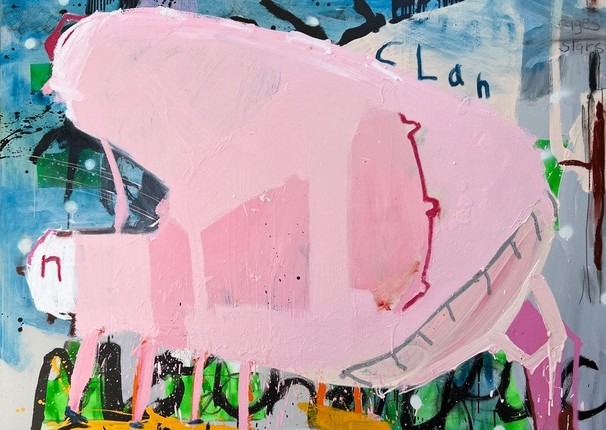 Through October 6
Free
The Gallery at Creative Pinellas
Details here

Jason Hackenwerth’s DARKMATTER is definitively installed in The Gallery at Creative Pinellas with a well attended opening reception on Friday, July 22.

Suspended in the largest gallery are two of Hackenwerth’s signature sculptures, constructed with hundreds, thousands of biodegradable latex balloons.

Two sculptures? Or is it two sides of one sculpture, a diptych? Or like earthworms when cut in half, each section continues living?

The artist describes the work on the didactic panel – “It begins as a single, eloquent form. One idea inheld with familiar curves that points to our physicality. . . Then, this best representation of perfection is ripped into halves. Torn in two like a delicate insect captured and destroyed by a careless child. The end is the beginning. The cleaved remains begin to grow and evolve independent of one another. . .”

Either way, they’re colorful, complex and the latex contributes the sensory element, a hint for the olfactory, to the whole enveloping experience.

Delicate preparatory drawings from Hackenwerth’s past sculptures lined the walls in the next gallery, and paintings great and small fill the smaller galleries and the lobby space.

As visitors “promenade” through the Creative Pinellas space, one may wonder what new movements could be added to Modest Mussorgsky’s 1874 piano composition Pictures at an Exhibition – which was exactly what Emerson, Lake and Palmer (ELP), the innovative rock trio, did one hundred years later in their 1971 live concert adaptation.

It was an exhibition of artist friend, Viktor Hartmann that inspired Mussorgsky to compose Pictures at an Exhibition with a “Promenade” melody interweaving through ten movements. Shot through a turbulent, psychedelic and culturally transforming ’60s decade, ELP in their progressive rock performance revamped this classical piece where they wrote in new movements, left out some originals, and added lyrics where there never were any.

History is a big spiraling galaxy. In the five decades hence, Hackenwerth’s own content and energetic gestures might echo ELP’s screaming synthesizer, roaming guitar solos, vocals of mythical lyrics. And with Ukraine in current news, I think of the lyrics from their last movement, “Great Gates of Kiev“.

There are 32 paintings ranging from 20” x 20” to 144” x 180” in size – an amalgam of materials, styles and techniques that Hackenwerth has made his own with energetic, searching, broken lines, calligraphic lines, paint splashes, morphing shapes, erased and covered up texts, smeared marks. . . and lots of the color pink – he even had tufts of his hair dyed pink for the opening reception, and wore a matching pink jacket and pants. Very droll.

One group of canvases have portals, with one appropriately titled The Portal. Common in all of these is the image of an oval ring, with a leg extending on each side, reminiscent of the Horace E. Dodge and Son Memorial Fountain, a hefty ring lifted 30 foot high by two canted legs extending outward over a round pool, a futuristic steampunk water sculpture on Detroit’s riverfront plaza, designed by Isamu Noguchi and installed in 1978 – a transportive experience by its sheer scale with bendy views through the rising and falling water.

Hackenwerth’s paintings transport by drawing the viewer in, with the oval acting as a window, looking into what paint can do, what a person, an artist expressing life experiences can do.

While Hackenwerth’s sculptures and paintings seem like two separate entities, there are areas of overlap like the shapes on the Nightingale or Appetite for Destruction paintings, that could easily be from one of his voluminous ballooned sculptures. These paintings with big blobby forms, interacting with layers underneath and marks, ticks and splashes, are compositions that create a landscape for the balloon sculptures.

And texts – almost every painting includes something written. Words are part of Hackenwerth’s visual materials, a language within a language. Some pieces have the text prominent, like the word PLOUGH in the painting A Heavy Rain Will Fall, where it is the visual foundation. Other canvases are like echoes in the background, interrupted voices, lost voices, muffled sounds, or voices in the wind.

And the text carries over into the titles. Unlike the “Untitled” title many artists use, these titles are text-worthy, ideas in and of themselves. Certainly Hackenwerth carefully considers them, which make them amendable to a word game called Painting Titles Poetry.

From the titles of the 32 paintings, here are some possibles –

She is Home
Heroin Girl, Queen of Hearts
The Only Perfect Place is In Her Eyes
Blazing Truth

Recipe for Disaster
Business As Usual

This form of poetry is not without precedence as Book Titles Poetry was trending several years back. A fun afternoon, particularly during rainy days of Florida hurricane season, locked indoors to peruse bookshelves and rearranging the titles to compose poetry, or just reading titles as they’re randomly stacked for serendipitous wordplay – a version of the surrealists’ Exquisite Corpse drawing game.

As to the exhibition title, why DARKMATTER, a placeholder term that scientists invented to call the unseen stuff that makes up a large part of the universe – that cannot be detected by any instruments or methods currently available – Hackenwerth writes in the introductory panel: “. . . This exhibition examines the spiritual implications of this strange and mysterious matter, as well as the stark inequities of our current society. . .”

Frequently scientific nomenclature is borrowed to describe an artistic practice or explain belief systems, sometimes for metaphoric purposes or poetic license. But more often than not, in the process, the scientific meaning gets reassigned or completely misused. A popular example is “quantum,” a measurement of super tiny sub-atomic particles, but the rest of society has coupled that with “leap” – quantum leap – to describe a development or advancement so astounding that catapults us to the astronomical spheres, a total one eighty degrees from the meaning of quantum.

Artists are alchemists, turning ordinary things into deep aesthetics, from nothing into something. So whatever dark matter may actually be, scientifically speaking, perhaps “this strange and mysterious matter” is the philosopher’s stone inside the artist (and potentially every single breathing person?) that is not measurable, nor detectable under X-ray, MRI, CT scan or any other probing machine. It is the “spiritual implications” transforming the artist in the pictures at this exhibition, and by phenomenon of transference, also the viewer.