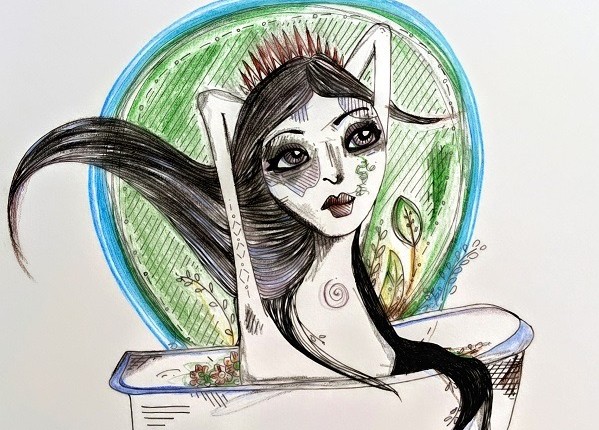 Rituales
An Exploration of Faith in the Caribbean

. . .
It was an absolute honor to be among the St. Petersburg Arts Alliance 2022 Individual Artist Grant Program awardees. My project titled Rituales: An Exploration of Faith in the Caribbean explores the practice of rituals inherited through cultural mythology and spiritual beliefs, drawing inspiration from religious practices rooted in indigenous and Afro-Caribbean origins.

The finished project will include a series of ritual-inspired illustrations and an altar with hand-crafted dolls, candles, seashells and other items commonly used in Caribbean spiritual practices.

. . .
As a Cuban-American immigrant, I have always been fascinated by the diversity of religious and spiritual practices in Cuba and across the Caribbean. Having recently visited Puerto Rico, I became further inspired by Taíno art, history and religious beliefs.

Once the idea for this project took hold, I was compelled to create a series that celebrates the diversity of religious and spiritual practices across the region. The diversity of the Caribbean, with its multi-racial, multi-lingual and varied religious beliefs, presented an opportunity to explore the ritual practices that were handed down from our ancestors.

. . .
My research to date has included a bilingual survey geared toward identifying patterns and commonalities in the collective experiences of those who identify as Caribbean. Survey participants have included a first generation Cuban American licensed therapist and healer whose practice focuses on providing a pathway toward healing for Latinx women, a first-generation Cuban American with native Taíno/Arawak ancestry, a Cuban Mexican anthropology and sociology major with extensive experience in multiculturalism and civil liberties, a Caribbean nurse who shares a surname with a famous Cuban ballet dancer, and a Cuban immigrant who retains hand-written healing recipes document by her maternal ancestors, among others.
. . .

. . .
The first piece in this series titled Cuando Hablen Los Tambores (When The Drums Speak) was inspired by the rhythm of ritual drums. Subsequent works include Con El Mar Dentro, which honors the goddess Yemayá, mother of the sea; Bara Yucubia (Rain For The Plants), inspired by the essence of smoke and its use in rituals to invoke gods and nature; and El Despojo: Una Experiencia Curativa, inspired by one of the most common rituals practiced across the Caribbean.

. . .
My work on this project will continue through September and new pieces are forthcoming. I am actively looking for a venue to showcase the series once all work has been completed.

I am also a proud member of the Artist Enclave of Historic Kenwood where three other artists are also SPAA grant recipients. We hope to secure a location for a group show later in the year featuring all of our finished projects.

In the meantime, I have been sharing work in progress on my website at lesinfin.com and across my social media channels: @lesinfin.art (IG); /lesinfin (FB).

. . .
If you identify as Caribbean and would like to participate in a quick, three-question survey geared toward identifying patterns and commonalities in our collective experiences, please reach out to me via email at lesinfin@gmail.com with “Rituales Survey” in the subject line.