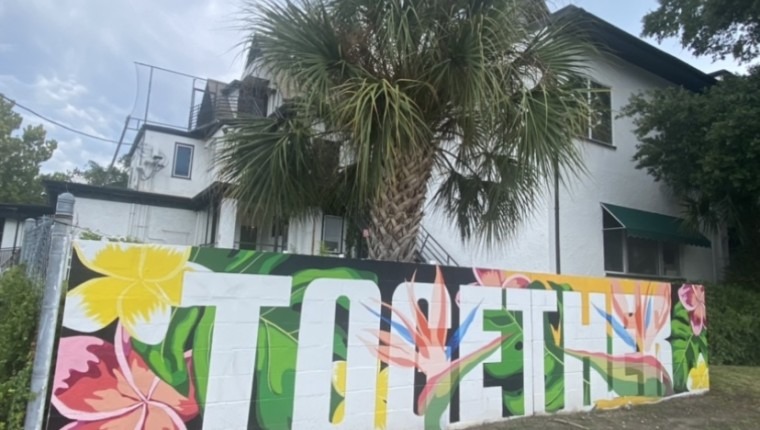 Four artists share their artistic expression
about the word ‘Unity’

. . .
What is unity? If you type those words into Google, you will read “the state of being one, integration, amalgamation and coalition,” among other synonyms and definitions.

The four artists selected for the SHINE Unity project had the opportunity to explain what unity means to them through murals.

“We have heard over the years how people have wanted more art outside of just the downtown art districts. So, our hope is really just to get art into the neighborhoods,” says Jenee Priebe, who works as the Director of the SHINE Mural Festival and the mural coordinator at the St. Pete Arts Alliance.

The St. Petersburg Arts Alliance is a nonprofit supporting the development and advancement of the arts within the St. Pete community. This year, the Arts Alliance received a grant from the NEA (National Endowment for the Arts) of $25,000, providing funding for the Shine Unity Mural Project and to celebrate St. Pete Pride‘s 20th anniversary. The SPAA was also granted $50,000 in operating funds this year from the NEA, distributed by Creative Pinellas through the American Rescue Plan.
. . .

. . .
Priebe shares the process of selecting artists for the four murals in the Unity project. The Arts Alliance issued a call for artists and interested applicants to submit their portfolios and relevant experience. After careful consideration, The Arts Alliance selected the best applicants for four individual neighborhoods throughout St. Pete.

Once the artists received their assignments, they began work in these “neighborhoods outside of the seven arts districts where we traditionally create murals,” Priebe says.

The Arts Alliance encouraged the artists to reflect on what unity means to them and how it applies to “a creative expression of unity in their own voice and their own style,” Priebe explains.

Additionally, each artist took a virtual tour of the African American Heritage Trail via Gwendolyn Reese, the president of the African American Heritage Association of St. Petersburg. Priebe says the artists participated in this virtual activity to get an in-depth understanding of the important and historical neighborhoods and landmarks in St. Pete.

“[The artists] were able to kind of use that to just, not necessarily inform the mural, but just give them some background on the neighborhoods that they’re meeting in,” Priebe says.
. . .

Throughout the mural, you can pick out uplifting phrases such as, ‘love yourself first,’ ‘be who you came here to be’ and ‘what is the thought you’re going to think next.’

With vibrant colors and a matching tone, this mural will help unify a community or reach someone going through a difficult time.

Brain Storm’s creation at 1655 16th Street South shows a child exclaiming “peace, love, and unity.” The child’s expression of pure joy evokes a warm feeling in the viewer, making them want to go out into their community and contribute.

The unmatched joy on the child’s face will brighten your day.

Reda3sb’s mural at 4139 7th Terrace South depicts a child, a flower, and two people of different complexions holding hands. The prominent pink and blue throughout the piece offer the viewer calm.
. .

. . .
Jabari Reed, otherwise known as iBOMS designed the fourth mural of the SHINE Unity Project at Childs Park. The building assigned to him underwent construction recently, so his project will be getting underway soon.

“He also had a chance to meet with the Childs Park Neighborhood Association and discuss what they would like to see in the mural,” Priebe says, mentioning the Association also favored themes of unity and community within the neighborhood.
. . .

. . .
In addition to the new murals, Priebe mentions that the Arts Alliance helped revamp and refurbish other public art pieces throughout the Grand Central and Warehouse Districts of St. Pete.

“My hope is just that people will enjoy the art in their neighborhoods, and it will be something that they see on a regular basis that brings them joy and a feeling of connectedness to their community,” Priebe shares.
. . .