Exploration of artists and their work kicks off
The Curious Collector: A Conversation Café with Celeste Davis

Colored People: Visions by Carrie Mae Weems and Amy Sherald was Davis’ inaugural presentation of what Woodson director Terri Lipsey-Scott announced would be a monthly event. With a pre-talk period that allowed guests to gather their coffee and pastries, the room was filled by the time Davis began — and as more people continued to file in, seats were added.

Celeste Davis was the mastermind and host of the event. She holds an MFA from George Washington University and a certificate in Fine Art and Furniture Appraisal from NYU — and her passion for, and love of, the transformative and transcendent nature of art was evident in her almost reverent tone toward the two artists.

“I had volunteered at the Woodson in many capacities over many years — putting out chairs, cleaning up after events, curating events, hanging exhibits, lots of things. And in the course of that work, I’ve always enjoyed and valued the conversations that happen within these walls that extend out into the garden,” shares Davis.

It was those conversations, says Davis, that sparked the idea for the series — discussions “about the artwork and what that artwork actually means to us as a race, as a culture, what does it say about us as a community,” that led her to want to create a “mechanism” for those conversations to happen.

The community experience and sharing, in other words, adds to the experience. The selected art topics, for Davis, provide way to ponder our own experiences and existence. “I think that’s what artwork does when it’s done really well. It gives us insights into who we are,” she muses. “I titled it ‘The Curious Collector’ because it’s art that then stimulates us to be curious.”

She began her presentation with a quote from Henry David Thoreau that prepared the audience for what came next: “The question is not what you look at that matters, it’s what you see.”

She then passed out sheets of paper — with spaces allotted for personal responses at the beginning and the end of the talk — assuring audience members, “This is not a test… you will not have to share!” Davis then asked viewers to look at two slide images and write down a few words for each.

On the left was an image from award-winning photographer Carrie Mae Weems’ Kitchen Table series, of a woman and man seated together.

On the right, a portrait by painter Amy Sherald, the artist who painted First Lady Michelle Obama’s official portrait at the Smithsonian’s National Portrait Gallery. The portrait in the slide Davis showed was titled The Boy With No Past.

Davis began her talk with a little history on Weems, who was living in Massachusetts between 1988 and 1990. “After work every day she took pictures of herself around her kitchen table,” explained Davis. “What was so revolutionary about the Kitchen Table series is that it was the first time that an African American woman had taken the opportunity to not let someone tell her own story, but boldly tell her own story.”

Davis related that, as the kitchen symbolizes the center of family, Weems explored universal relationships with herself and others through her staged photos that are illuminated by one large overhanging light and simple props.

Davis also showed a short film about Weems and presented 20 slides that make up the Kitchen Table series. “As a curious collector, there’s always that question out there that everyone wants to know — how much?” Davis smiled as the slide show ended. “This painting sold for $70,000,” she informed viewers, noting one of Weems’ untitled images from the series.

She then moved on to talk about artist Amy Sherald. “What is the Amy Sherald effect? I went to the Portrait Gallery and I saw the painting of Mrs. Obama,” Davis explained.

‘I had seen it online and I had seen it in print — but nothing prepared me for seeing the piece face-to-face. There was something powerful and moving in the image.”

Recalling the numerous articles about the little African American girl who couldn’t pull herself away from the Michelle Obama portrait, Davis acknowledged, “I know what she was feeling.”

“I have to be honest, when they first showed the portrait, I thought, ‘why?’” she continued — referring to Sherald’s hallmark of painting skin tones in shades of gray. “I didn’t understand it, I didn’t get it.”

“But when I saw the portrait up close, and then I began to read about Amy Sherald, and look more deeply at the work she does, my appreciation for her and her work grew profoundly. It’s really amazing,” stated Davis.

After showing a short film about Sherald, Davis discussed Sherald’s choice to use grayscale for African skin, pointing out the painter’s decision to attempt to “take race out of the conversation.”

“The skin color can sometimes get in the way of us being able to see each other as people. So, her way of dealing with that, is not to deal with it,” Davis noted, referring Sherald’s choice to focus on her model’s features, hair and clothing — allowing you to see their portrait without immediately taking in their skin color. “I think that is a very powerful technique that she has perfected.”

Davis ended by stating she feels both artists create work that has a timeless quality — which adds to their superlative ability to impact viewers.

Celeste Davis will be back with another installment of The Curious Collector on February 22 from 10:30 to 11:30 a.m. at the Dr. Carter G. Woodson Museum.

The topic of the conversation café will be, Celebrating Black History Month by way of Gee’s Bend, Alabama, focusing on the world-renowned quilts that have come out that community. 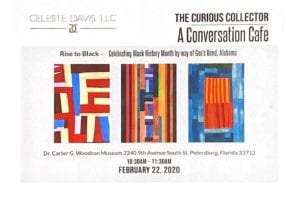 The Carter G. Woodson Museum is located in
St. Petersburg’s historic Deuces neighborhood,
on the African American Heritage Trail.
The museum is open Tuesday through Friday from 12-5 pm or by appointment — and open late the second Saturday of every month from 5-9 pm for ArtWalk.

You can find out more at woodsonmuseum.org

Carrie Mae Weems, born April 20, 1953 in Portland, Oregon, is a multi-award-winning artist best known for her photography, films and videos. She has held over 50 exhibitions in the U.S. and abroad. Through three-and-a-half decades of creative production her work has explored issues of sexism, politics, personal identity and racism.

When discussing the Kitchen Table series, Weems has said, “I use my own constructed image as a vehicle for questioning ideas about the role of tradition, the nature of family, monogamy, polygamy, relationships between men and women, between women and their children, and between women and other women—underscoring the critical problems and the possible resolves.”

Weems was the first African American woman to ever receive a solo exhibition at New York’s Guggenheim Museum with a 30-year retrospective of her work in 2014. Her work has been exhibited at dozens of museums, galleries and universities — including the Detroit Institute of Arts; Mobile Museum of Art, Alabama; Philadelphia Museum of Art; The McKenna Museum, New Orleans; The University of Washington, Seattle; The National Gallery of Art, Washington DC; Studio Museum in Harlem, New York; California African American Museum, Los Angeles; and the Miami Art Museum, among many others.

Her most recent project, Grace Notes: Reflections for Now, was inspired by “the killings of young black men, and the events of the Emanuel Nine,” the murders of the nine African-American members of the Emanuel African Methodist Episcopal church (Emanuel A.M.E.) in Charleston, South Carolina. A multimedia performance piece that premiered at Yale University Theater in 2016, Weems combined text, choreography, videos and live performers — including a step dance performed by the Yale chapter of Omega Psi Phi Fraternity.

Davis observed Weems’ work as “subtle in presentation, but deep and rich in value,” noting that while her work feels deceptively simple, her genius lies in taking what is a common image and layering it with depth, where “the ordinary becomes extraordinary.”

Both inviting and disarming, they pose like paper cut-outs against otherwise empty negative space rendered in a single vibrant color. The effect is heightened, magical and soul-stirring.

Born on August 30, 1973, and based in Baltimore, Sherald earned her B.A. degree in painting from Clark Atlanta University in 1997, apprenticing with Spelman art history professor Arturo Lindsay. That same year she participated in Spelman College’s International Artist-in-Residence program in Portobelo, Panama.

In 2003, Sherald was diagnosed with congestive heart failure. In 2004, she received an MFA in painting from the Maryland Institute College of Art, then traveled to Norway to study with painter Odd Nerdrum.

Over the next few years Sherald would battle challenges with her own health, as well as move home to Georgia to care for ill family members. She didn’t paint for several years during that time.

In 2012, having returned to Baltimore, she collapsed in a store and was raced to Johns Hopkins Hospital. Sherald said to Baltimore Magazine, “I felt like I could die then, and it did scare me. I thought, ‘I can’t be afraid to die,’ so I just made peace with it at that moment. I said, ‘I’m not going to be afraid; it’s all going to be okay.’”

The same year, she underwent surgery to receive a heart transplant. She was 39 years old.

She returned to painting and in 2016, her portrait Miss Everything (Unsuppressed Deliverance) won the Outwin Boochever Portrait Competition — making her the first woman to ever win the competition.

The competition took notice of her stylization of skin tone, stating, “Sherald creates innovative, dynamic portraits that, through color and form, confront the psychological effects of stereotypical imagery on African-American subjects.”

Of her own work, Sherald has said, “I was inspired to paint things that I didn’t see within the art historical narrative. It came naturally, to paint people that looked like me, but then I also recognized that the art history books that I looked up weren’t culturally relevant. The images [of people who looked like me] weren’t there.

“I understand the importance of being represented at a cultural level and being able to see reflections of yourself, and society, and in culture. I basically paint people who I want to see exist in the world, but then I also want to creative a narrative that’s extricated from a dominant historical narrative.”

Not long after winning the Outwin Boochever award, Michelle Obama chose Sherald to paint her official portrait — another coup, as Sherald became the first African American woman to paint an official First Lady portrait. Unveiled in 2018, it is one of the most popular and most viewed paintings in the National Portrait Gallery’s history.

In 2018 she was awarded the Driskell Prize, and in the fall of 2019 Sherald had her first solo exhibition, titled “the heart of the matter…” at the Hauser & Wirth Gallery in New York City.

Her paintings are held in collections at the Embassy of the United States, Dakar, Senegal; The Columbus Museum, Columbus, Georgia, and FTI Technologies Inc., Baltimore, Maryland.