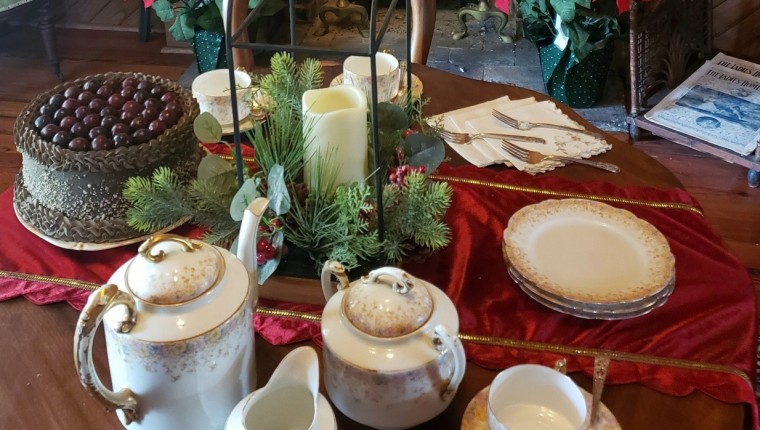 A Chance to Travel Back
to Christmas 1883 in Tarpon Springs

. . .
It’s the time of year when many are taken back to Christmas in 1800s England through the words of Charles Dickens’ A Christmas Carol. Retellings of that story of ghosts, greed and appreciation has become an annual tradition even now, 180 years after it was published.

The romanticism of the 19th century, such as singing around a piano, reading traditional stories near the fireplace as a fire crackles in the background, has carried through to modern times. Life was obviously more difficult than it is today but it was simple. The stories of Victorian-era Florida Christmases have also survived, including tales of the Stafford family’s holidays in Tarpon Springs at the magnificent house that survived them.

The house is now owned by the City of Tarpon Springs and fortunately, it has been restored to as close to its original state as possible. The city has every right to be proud of its oldest house turned museum.

Every December they offer a glimpse back in time through their Victorian Christmas Celebration which the public is invited to experience on December 10 and 11, 2022 through ticketed reservations.

. . .
A Short History of the House and its Name

. . .
It was 1987 and a self-employed architect was driving through some of Tarpon Springs’ neighborhoods when an old, neglected white house caught his attention. By now, the house had been through generations of owners. Fortunately, it remained standing thanks to a 1974 designation through the National Register of Historic Places. It was the oldest house in Tarpon Springs and needed major restoration.

Two years later that same architect purchased the historically important home for $150,000, intent on restoring it. But it would take more of an investment than he or other investors may have understood. The historic house was donated to the City of Tarpon Springs in 1994.

What to Expect When You Visit

. . .
Actors portraying Safford family members and friends will guide visitors through the home for two-hour tours at 10 am, 1 pm and 4 pm each day.

Actors will share history and stories about the Safford family and life in Victorian-era Tarpon Springs. Each two-hour house tour will include a musical performance, refreshments, and a photo opportunity with the cast.

If you’re not able to participate in a holiday tour this year, the museum is open to the public from 11 am to 3 pm Wednesday through Friday throughout the year. You can find the details here.

The museum is located in the historic district off Grand Boulevard at 23 Parkin Court, Tarpon Springs FL 34689. Parking is free in the lot next to the house.