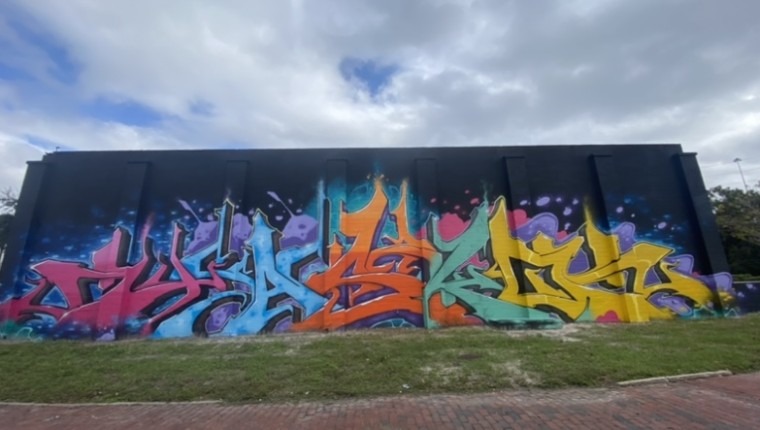 . . .
If you stroll through any art district in St. Petersburg, you will inevitably stumble upon a mural. Monumental displays of colorful statements splash the walls of this artistic city.

Each year the St. Pete Arts Alliance and their SHINE Mural Festival bring the best local, national and international muralists to the Burg with a specific task – to adorn the walls of the city with stunning art.
.. .

SHINE is a week of activity – but you can appreciate the art all year.

Creative Pinellas spoke with two muralists, Tasko and Sydney Prusso, and Jenee Priebe, director of the SHINE Mural Festival, about their involvement and experience with this renowned celebration of public art.
. . .

. . .
Sydney Prusso applied to SHINE in 2021 and received an acceptance letter in May for her piece Go Outside, Look Inside.

“I knew I wanted to create a piece that centered around my love for the outdoors,” Prusso states. She brainstormed four iterations of this mural.

The first “was a bug’s eye view of a woman reaching down to help someone up who was laying in some grass. The second idea was someone picking flowers from that same viewpoint. The third was when I finally landed on something closer to my finished piece. The focal point was a vase of flowers with a dragonfly sitting on top of the flowers, surrounded by those words ‘go outside, look inside.’”

While that text remained in the piece, Prusso disliked this busy revision.

“I simplified it to be some groovy butterflies as the focal point surrounded by those same words. Finally, I gave one of the butterflies some eyes to tie into the idea of looking inward. I wanted to give the viewer a feeling that nature was watching them,” she says, noting her piece expresses her adoration for nature.

Prusso explains the mural represents an ability to take a step back from the hustle and bustle of daily life and reconnect to the outdoors. To take an inward look while tuning into the wonders and beauty of nature. Prusso implores viewers to reflect on any questions that arise while consuming the mural.

“What is nature telling you? Do you need clarity somewhere in your life that spending time in nature could provide? Do you feel like nature is asking you to protect it? Could you be examining your own environmental impact?”

When Prusso designed the mural, she did not cater to a specific age group. According to her, nature affects everyone.

“While painting, I had little kids run up saying they made their parents pull over because they loved the rainbow of color. I had grown adults tell me with tears in their eyes how much the message touched them because they had experienced firsthand what the healing power of nature can do for your soul.”

. . .
Tasko, or Jake Lee’s three-dimensional graffiti backdrop adorns a wall at 1960 5th Ave S. Tasko learned of his opportunity to unleash his skills for SHINE in the middle of September. (His mural St. Pete was featured in the 2018 SHINE Fest.)

“I normally freestyle all my work, so this one was a bit of a challenge for me. The size of the wall was bigger than anything I’d painted before. I had a few rough sketches I went off of to get my basic design on the wall and tweaked it accordingly until I was happy with it,” Tasko said of the bright, loud mural.

Tasko conveyed that this mural The Collective is “loud, colorful and in your face. It’s everything I’m not, and I love that.”
. . .

. . .
“I think SHINE every year gives people something to look forward to – and what’s great about it is that it’s all free and accessible…” SHINE director Jenee Priebe says. “It has the ability to keep people engaged in the community.”

Priebe’s involvement with SHINE begins when the previous year’s festivities conclude. She plans, organizes and curates the artistic display for the week-long celebration of talented mural creations.

“I am really happy with how it went this year. I feel really proud of it. I think the artwork that came out of it was amazing,” Priebe shares. “I feel like the community came out in a big way like they usually do, but I think this was our most well-attended festival so far. It seems like every year, the numbers grow a little bit.”

“We kind of were able to get back to our typical structure for the festival for the first time in a few years,” she says.
. . .

. . .
Instead of putting out a specific call for artists, SHINE hosts a year-round online submission open to all interested artists. According to Priebe, the curation team reviews each submission and invites selected artists to the festival.

“My hope [for the murals] always is just that it engages people in the power of art and that it finds people that might not necessarily find themselves in a gallery or museum – but that the art could speak to them wherever they are.”
. . .

For a complete 2015-2022 list of SHINE murals and where to find them,
visit stpeteartsalliance.org/shine-mural-festival.
. . .

A visually-descriptive audio tour of SHINE murals from earlier years
is accessible on Soundcloud, voiced by actor Eugenie Bondurant.

The St. Petersburg Arts Alliance
is a recipient of the Pinellas Recovers Grant,
provided by Creative Pinellas through a grant from the
National Endowment of the Arts American Rescue Plan