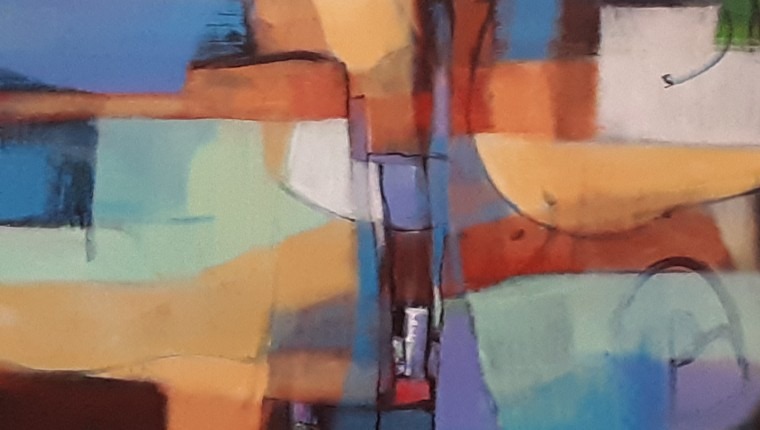 The tale of the Petticoat Painters started in the early 1950s when Marty Hartman won first prize at the Sarasota Art Association. It was a prestigious award with a cash prize that in the past had been awarded to male artists.

Marty was married to an artist herself. She and Bill Hartman had two small children. They lived in a trailer in Sarasota. Winning the prize was not only affirming, but would be enough to buy a week’s worth of groceries.

But instead of the cash prize, Marty received a paper certificate.
. . . 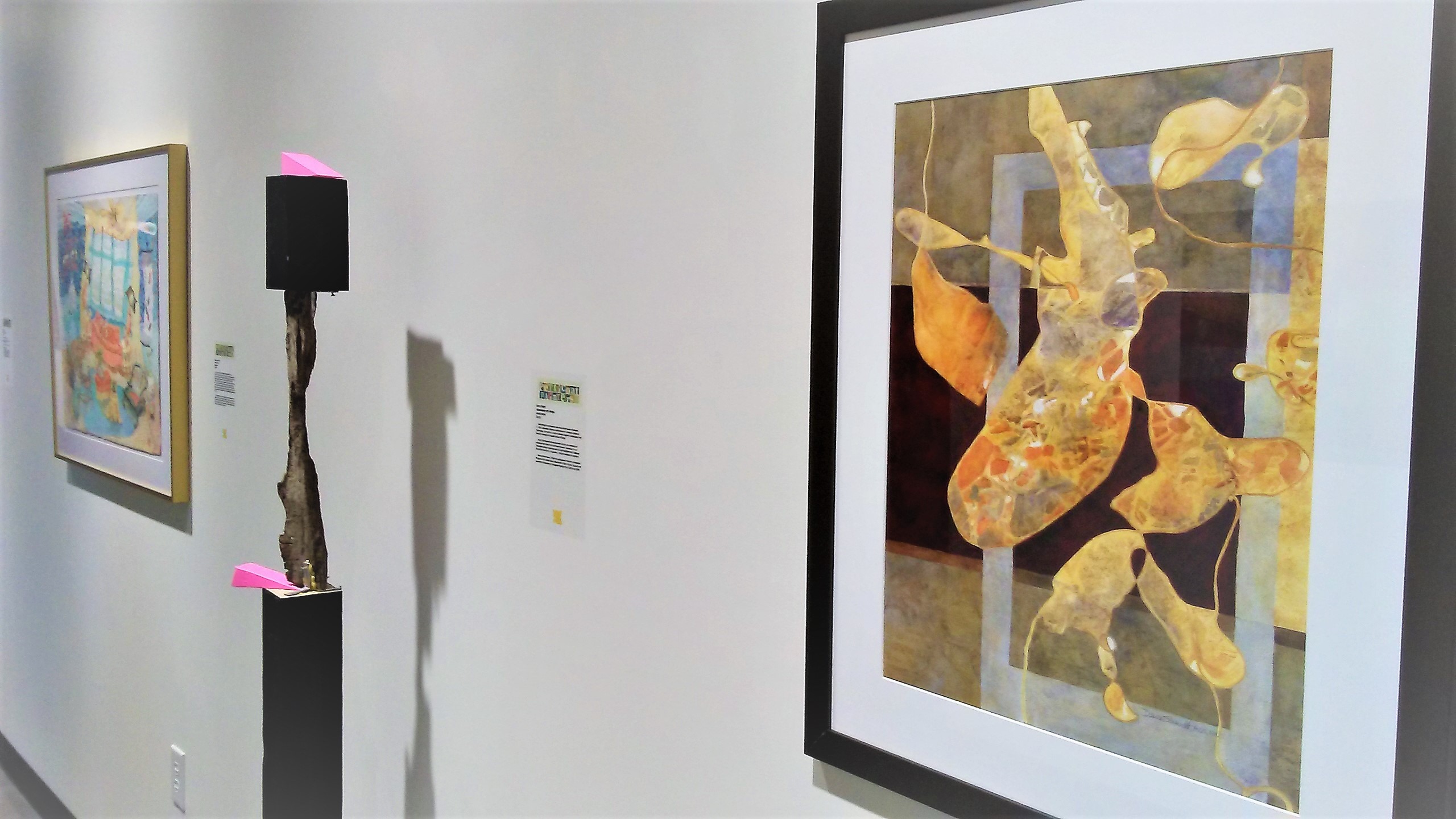 . . .
The Ringling College of Art + Design became a catalyst for Marty and six other Sarasota women artists. They formed a group with plans to show together and chose the name Petticoat Painters to “satirize the way women’s art was dismissed.”

The group has chosen to keep the name for the struggle it implies.

“I think it’s clever, rolls off the tongue,” says Petticoat Painter member Judy Lyons Schneider as she and the Dunedin Fine Art Center’s assistant curator Nathan Beard stand in the center of the 2nd floor gallery, surrounded by the lively textures and colors of not only Schneider’s work but that of other current Petticoat Painters.
. . . 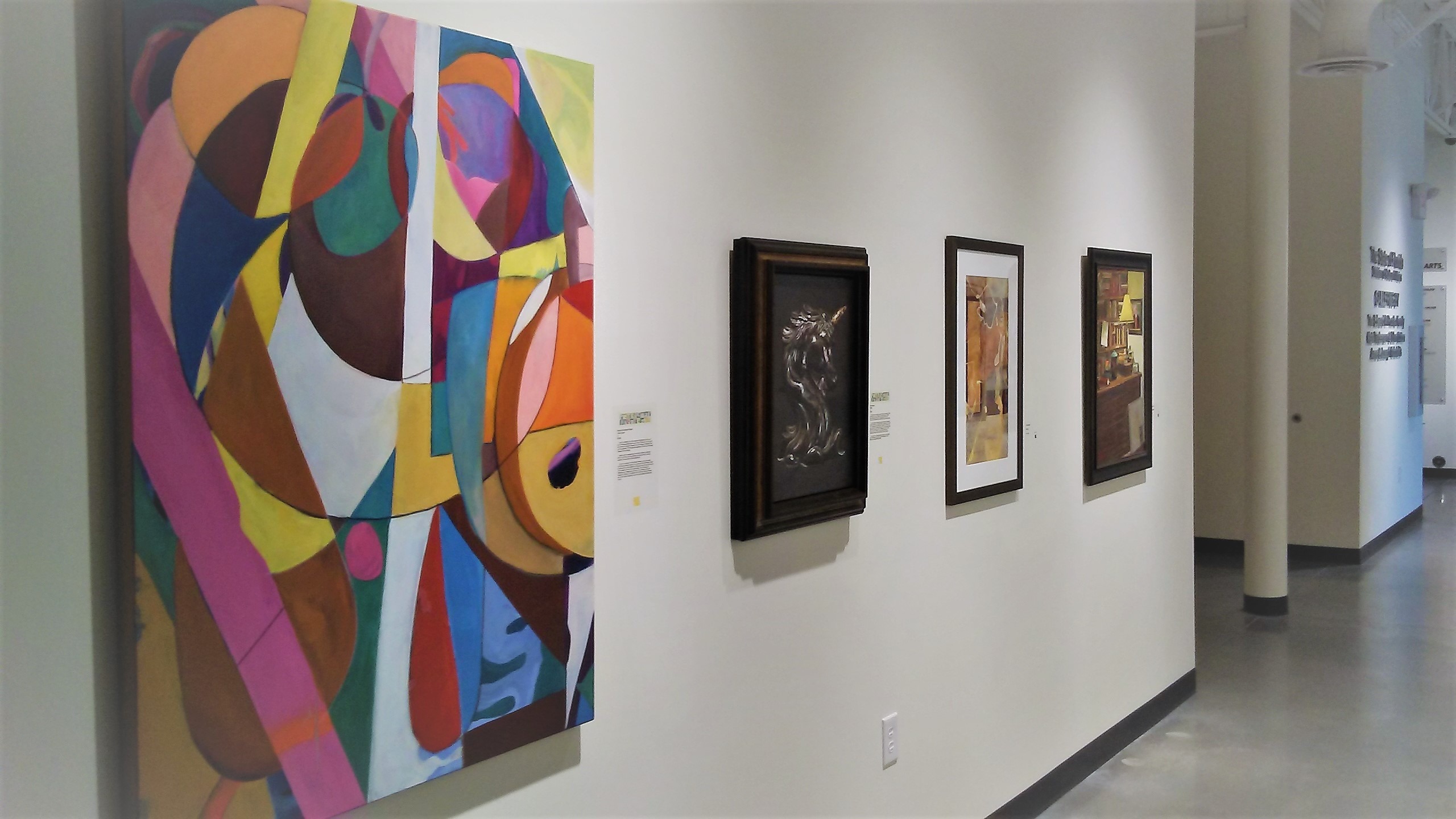 . . .
Beard looks around the room. His movements follow. He and Schneider fix their eyes on a vibrant still life by one of the group’s newest members, Nancy Hielscher, who before being invited into the Petticoat Painters, had followed and admired them.

There are no more than 20 Petticoat Painters in the group at one time and to be invited has nothing to do with education or affiliations. Being a Petticoat Painter means the artist has proven herself. She will support other members and do everything she can to keep a nurturing environment. These artists are mature, they’ve developed their careers and craft to a point where such requirements are easy to follow.

“Giving a space for women to come to that confidence. To have a group like yours, where you’re not competing. It’s so much of what we do at the art center,” Beard says. “We are all here to build one another. It’s the only way.”

“I see it when I look at this exhibit,” Schneider says. “It is very interesting how diverse a group we are. It is wonderful to see the variety of mediums, styles.”
. . .

. . .
Judy Lyons Schneider’s Ciudad Plus is a mixed media print created from solar plates she made. “You make a plate but the plate is activated by the sun,” she says. “Basically, I will take a photograph and play with it on the computer to size it. With some of them I have drawn in other things. Then I will put them on a transparency, then I will apply the transparency to this particular type of plate, expose it to the sun for a very short time, which activates it, then you wash it off with water and expose it to the sun to solidify it, to protect it and then you print it as you would any etched plate.”

Schneider’s process, like her art, is multi-layered. The magic in her work is the emotion it evokes from its space on the wall, waiting to pull the viewer in. “There were times I was taking a picture and there were other times when I knew, that one’s going to work!”
. . .

. . .
Another newcomer to the Petticoats is Mary GrandPré. Her work is mostly abstract now after a career as an illustrator. She’s well recognized for illustrating the American series of Harry Potter.

In the latest segment of DFAC’s “Virtual Conversation with the Artists,” GrandPré speaks about her piece House of Quiet Rain and how she came to abstraction. “Most of my years have been as a picture book illustrator. Creating pictures for a narrative was nothing new to me. Until I realized I wasn’t happy as an artist illustrator.”
. . .

. . .
There is musicality to GrandPré’s art, and for good reason. “When I paint, I tend to want to give the viewer just enough of something that is familiar. The painting becomes an invitation, a doorway that invites the viewer in to travel through.“

House of Quiet Rain offers the viewer the soothing sounds of her brush strokes and choice of colors. “I wanted to create a place. A suggestion of rain, or a pathway or a place to go into to stay warm. Texture next to flat, line work next to brush work.”
. . .

. . .
Judy Just’s A Path Through Chaos is a rich, layered piece. The artist seems to welcome the viewer into what could be the center of a secret yellow space where a newcomer, pink, arrives — the sudden life of the party. It’s an abstract, alive with colors she has an obvious connection to, but with almost whimsical movement.

“My thing is color,” Just says. “I love to explore new — how things come together and how they don’t.”

Just explains how the art and the process in which she creates it, allow her a connection — to everything.

“I love pouring paint,” she says. “I love working with color. It’s an amazing dance that I have with my art. I have synesthesia for color. I feel color. I feel the next color to go down.”
. . .

. . .
Jana Millstone’s Iconoclasts is part of her Fables for Our Times series. It’s about dismantling the status quo. “In any board room, any public space, there’d be a self-satisfied gentleman in a gilded frame staring down at me,” she says in the “Conversation with the Artists” video. “A lot of my work is about thinking about power and power structure.”

Millstone expresses that in a way that at first makes the viewer laugh, but the longer you watch the painting, the louder it speaks. “I often do it with children. But not always. I had to think of the trappings of success and what made him so pleased with himself. I spent a lot of time thinking about the buttons and the watches and the silk tie, the cufflinks. All of these things shout for my little girls.”

For every girl who wants to be an artist, and for every woman who hopes to continue to grow as an artist, there are layers of generations of women who will cheer them on. The Petticoat Painters are proof of that.

“We believe women’s voices united, tell a unique and distinctive story. Our shows are important inspiration for all women artists who hold a firm belief in their vision and persist in pursuing it.”