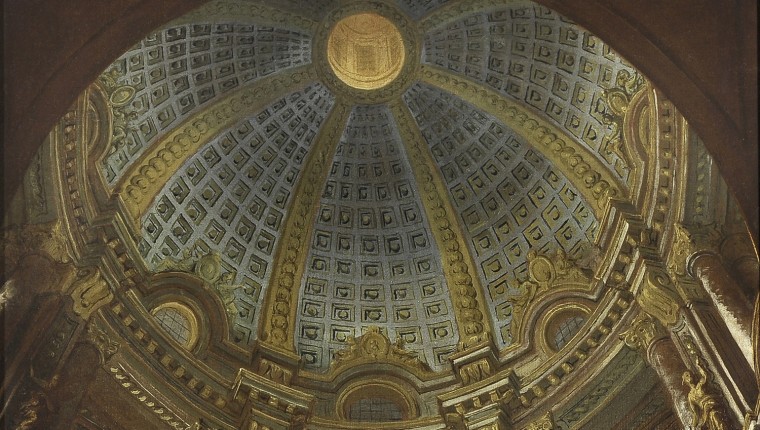 Bernini and the Roman Baroque –
Masterpieces from Palazzo Chigi in Ariccia

. . .
Through May 8
Museum of Fine Arts
Details here

. . .
I go through life with beliefs, preferences, knowledge, relationships and joy, like everyone else. It’s no different when you visit an art exhibition.

That is how I entered the new show at the Museum of Fine Arts in St. Petersburg, Bernini and the Roman Baroque: Masterpieces from Palazzo Chigi in Ariccia. I had a smattering of knowledge of the Baroque, and a lot of experience viewing, thinking and speaking about art as well as my experience as a professional artist. Yes, one can say I brought baggage. But who doesn’t?

I did know going into the exhibition that I would see paintings (maybe a few sculptures or reliefs) that were more dynamic, robust and of real life than the idealized art of the Renaissance. I also quickly learned from Stanton Thomas, the exhibition’s Curator and the museum’s Senior Curator, that I was going to view the Chigi family’s collection. Since the Chigi family had long and close ties with the papacy, I expected to see religious paintings and evidence of wealth.
. . .

. . .
The first room contains some of family’s artifacts and images of their palaces. I was especially drawn to a gold bordered framed piece of black wood with an attached gold ornament of two cherubs which decorated the carriage of Cardinal Flavio Chigi. (#1). My mind immediately conjured up this piece decorating an elaborate black carriage pulled by large black horses with flowing tails.

Later, as I viewed Ferdinand Voet’s stunning portrait of Cardinal Chigi (#2) and learned more about him, the cherub carriage in my mind now had its shades drawn and the perfume of beautiful women wafting out.
. . .

. . .
From this room, I entered the large main gallery where I felt I truly encountered the collection. As I stood in the entrance way, I took in the whole room. I was looking at how the art was presented. For example, what is the color of the walls and how does it serve the art? We know that the wrong wall color, the wrong light, can ruin even the best of art.

The MFA chose wisely to paint the gallery a blue gray which complements the light emanating from the paintings and pops the colors especially the brilliant reds. The wall color also allowed the frames – gold, of course – to stand out to tell the viewer that what you are looking at is precious and a sign of wealth.

Having fantasized about Cardinal Chigi’s carriage ornament, my mind was focused on cherubs which I saw were plentiful in this gallery. Now, I have always called cherubs “putti.” A quick Google search informed me that these small, naked, slightly chubby, flying boys often with wings were called “putti” in the Greek and Roman world – but in the Christian world, the world of this exhibition, they are called “cherubs.”
. . .

. . .
Whether we call them “putti” or “cherubs,” they are angelic spirits that fly around us and are made visible in painting, sculpture and artifacts. They can be thoughtful, mischievous and most often protective. I call my dog “putti,” as a sign of endearment.

Hanging in the center of this large gallery is one of the most exquisite objects in the show – a chandelier (#3) with three cherubs holding up a golden crown. The Curator has hung it perfectly over a robust bouquet of flowers. When I first saw this chandelier, I gave out an appreciative yelp and said that I would have it in my house – the greatest endorsement I can give to any piece of art.
. . . 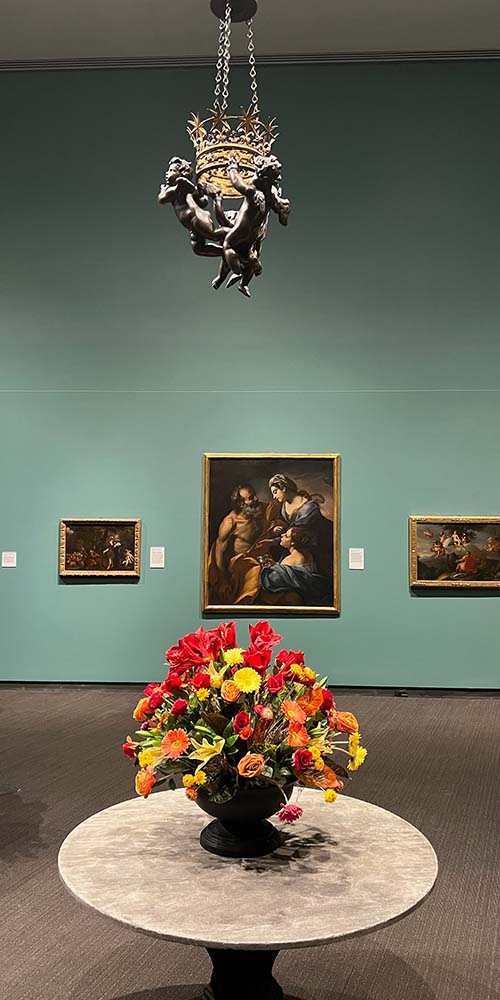 . . .
At the far end of the gallery hangs the largest painting in the exhibition, The Summer (1658-59) by the Italian artist Carlo Maratti (1625-1713) and the renowned flower painter Mario Nuzzi (1603-1673). (#4) I am drawn to it not only because of its size but it abounds with cherubs and flowers. I am sure it was no accident that the Curator Stanton Thomas placed the chandelier and its accompanying flowers across from this painting.
. . .

. . .
Summer is one of a series of paintings, The Four Seasons, commissioned by Cardinal Flavio Chigi of the black carriage fame. It is interesting that he commissioned the famous flower painter Nuzzi for the four paintings, and Nuzzi partnered with a different figure painter for each season. The flowers, which occur in this painting in abundance and include rare varieties – are a clear sign to the viewer of the Chigi wealth.

This allegorical painting has a straightforward composition. The female incarnation of summer is the most brightly lit and her head, crowned in ripe grain, is placed at the apex of the invisible triangle whose sides travel down both left and right touching the heads of the cherubs. The flowers, in their opulence, surround and hug the central action. The light seems both to be cast upon and emanate from the white skin of the cherubs and the female figure. The light highlights the beautiful bodies of the figures. All is well.

But wait. What’s with that cherub in the shadow on the left side of the painting? Yes, he is under the shade of the umbrella protected from the summer sun, but he is strikingly in the dark. What is he telling the other one?

I take it that the umbrella is meant for Summer whose pale skin will suffer from a severe sunburn if she does not get out of the sun. Sheltering her from the sun would indeed be a job for a cherub. The head of the cherub in the bottom right of the painting is also in the dark. What is he doing?

Wait, there is more. Look at the black shape in the top right-hand corner. Is it a mountain? Maybe, but it appears ominous. It’s a large, undefined shape blocking the sun and has a dark smoke-like cloud coming out of it. Summer’s arm is up in perhaps a protective gesture. Does she see the black object in the mirror? Looking closely at the mirror’s image one sees a black shape covering half of her face. Are we to be reminded of summer storms? Or that even summer isn’t always lovely and sunny?

On the other hand, the dark parts of the painting may simply be vehicles to make the bright parts show up better. Look at the cherub in the bottom right. His head dark in shadow allows the light to reveal his exquisitely painted bottom. Perhaps, all is well after all.
. . .

. . .
I can’t leave this painting without mentioning that we find the dynamic of the four seasons and nature elsewhere in Baroque art. Vivaldi’s Four Seasons is one of the best-known pieces of Baroque music. When I was in college, I worked one summer as the information person for New Hope, PA. There was a cassette player there whose only tape was Vivaldi’s Four Seasons. So, I listened to that composition over and over during that summer.

I wonder if Vivaldi knew of Cardinal Chigi’s commissioned paintings. I cannot find anything definitive in my research other than Vivaldi was inspired by the Italian landscape painter Marco Ricci. In any event, for me, they will always be connected.

It should be clear by now that I have a fascination with cherubs and putti. But it was not until viewing this exhibition that I came up with at least one explanation as to why there are so many in the history of art.
. . .

. . .
We know that in the world of the Greeks and Romans and from stories in the Judeo-Christian bible, there was a horrific practice of killing young male babies that could become a potential threat to the people in power. When, for example, the Greeks and Romans sacked a city or won a battle, they would kill their enemy’s men and male children and take the women and girls as slaves.

In the Judeo-Christian tradition, we find these stories. In Exodus in the Old Testament, the Egyptian Pharaoh orders all Hebrew male babies killed fearing that the growing number of Jews is a threat. Many babies were murdered although one, Moses, escapes through the cleverness of his mother.
. . .

. . .
There is a similar story in Matthew in the New Testament in which King Herod has male babies in Bethlehem under the age of two killed. He orders this after being told by the traveling Magi that they are looking for the newly born King of the Jews. These slaughtered boys are called the “Innocents.” In the Giovanni Battista Gaulli painting Apotheosis of Saint Joseph (c. 1700) (#5), one sees what must be the Innocents carrying Joseph up to Heaven.

Perhaps, this is why cherubs and putti are depicted as young boys. These slain babies throughout history and theology become the small, naked, slightly chubby boys often depicted with wings. They are transformed into angelic companions and protectors.
. . .

. . .
Viewing art is not a passive endeavor. It always gets me to ask questions and create stories. Often there are no answers, and sometimes, I don’t even know what questions to ask.

When I lived in Kansas City, MO, I had a radio show called Art Radio. On one show, I had a poet as my guest who was a T. S. Elliot expert. The poems of Elliot are anything but transparent. My guest said, when beginning to read Elliot, don’t try to understand the poems – just let the language wash over you. This is great guidance.

And, so, with paintings. Let the images just wash over you. Don’t worry about understanding them because if you can just be with the images, your eyes, your mind and your imagination will do the rest.
. . .

. . .
I certainly recommend seeing this exhibition, Bernini and the Roman Baroque: Masterpieces from Palazzo Chigi in Ariccia now at the Museum of Fine Arts in St. Petersburg through May 8, 2022.

I have only written here about a fraction of the art in this show. What I hope you have gleaned from my ruminations is that there is no one way to engage with art.

Each of us has our own way of entering into what we see. It can be triggered by the way you are with your dog, or something in the music you listened to when you were young or your love of flowers or the color red. Art is there for us on all the levels from bright sun to dark shadows.

Let it wash over you and let your life’s experiences guide your way. Art On!