Creative Pinellas’ Art SENSEation
a Feast for the Senses 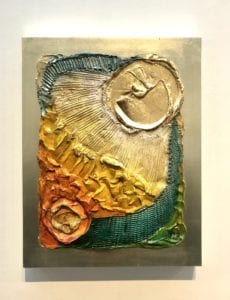 A flame ignites across the wide expanse of canvas. It ripples outwards, serpentining from a cool, remote cave — a hidden inset of a much wider terrain. A brilliant moonrise in silver inverts and becomes a sunrise in gold.

My hands descend rope ladders, ascend fire escapes. I trace circles, caught in their flat rotundas. My fingers are surprised when they graze a sudden cascade of rough gypsum, splotchy indentations, or the gritty accumulations of sand and dirt.

I experience the artwork of Horst W. Mueller both as a sighted person who has chosen to close her eyes and let her hands see — as well as with eyes wide open, taking in the surrealist, three-dimensional topographies in all their colored vibrancy. Mueller’s work is part of Creative Pinellas’ sensory art experience, Art SENSEation. The exhibition opens January 30 from 6-9 pm and is free to the public through February 16.

The exhibition is an extension of Creative Pinellas’ initiative to make the arts accessible in conjunction with a partnership between Arts4All Florida and Florida CraftArt. 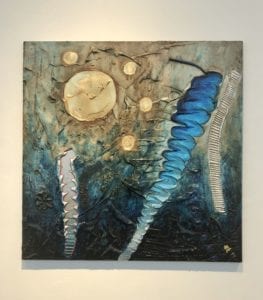 Curator Danny Olda was introduced to Mueller by Arts4All, an organization dedicated to arts education and cultural experiences for and by people with disabilities.

“The art is intended to be touched,” says Olda. “It is about making art available to an audience that might not be reached by a traditional exhibition.”

Mueller has built his career on the philosophy that “even hands can see.” A sign proudly declares it at the entrance to the gallery, inviting everyone to engage with his newest body of work, Atlantis Series. However, the dimensionality of the work isn’t the only aspect that sets this exhibition apart. The pieces in the show are all hung at a low, uniform height along the white-painted gallery walls. 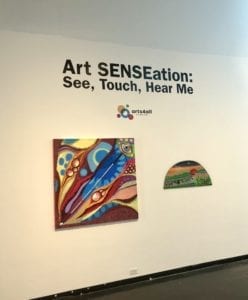 “If a blind person wants to feel the art, the art should be at a level where your elbow is hanging down. At that level they can see it,” explains Mueller. “If they have to grab way up high, how well can they experience it?”

Originally from Germany, and based now in Florida, Mueller made a significant effort to reach out to his local community when he first began exhibiting by contacting organizations for the visually impaired. Since then, he has been invited to teach workshops internationally, from Berlin to Moscow, facilitating empathetic connections between community leaders, architects, engineers, students and more through tactile arts experiences. 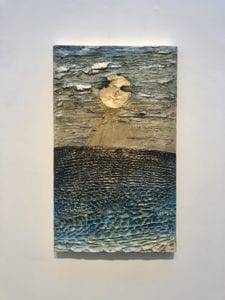 When it comes to his artistic process, he allows a free flow of energy from his hands through his materials and onto the canvas.

“When I do it, it is like meditation for me,” says Mueller. “I get lost in the studio. I get directed by Buddha or God or whoever you might call it. That is what gives me the possibility to do the work.”

Mueller will lead a Lunch & Learn workshop, “Empathy for Audiences,” at the Creative Pinellas Gallery on January 31 from 11 am-1 pm. Everyone is welcome to a panel discussion the night before on January 30 at 7 pm, featuring Mueller, Brianna Larsen from Theatre eXceptional and Kim Dorman from Creative Clay. 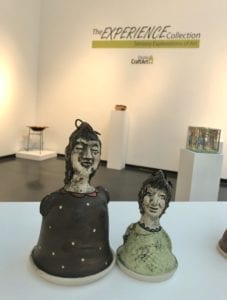 The exhibition includes See, Touch, Hear Me, a display provided by Arts4All and Florida CraftArt artists, appealing to a variety of senses as the artwork can be touched, strummed or smelled.

After walking through the exhibit, my eye gravitates back towards Mueller’s gleaming use of silver and gold. Mueller remarks that people will often ask him what the paintings mean, but he always answers a question with a question — “What do you see?”

He purposefully leaves his works untitled, teasing the hands and eyes to guess at what they see. Each canvas like a tantalizing open door. The answer to his open-ended questions are only realized in what the fingertips can trace — the eye of the beholder feasting upon every curve and ravine.