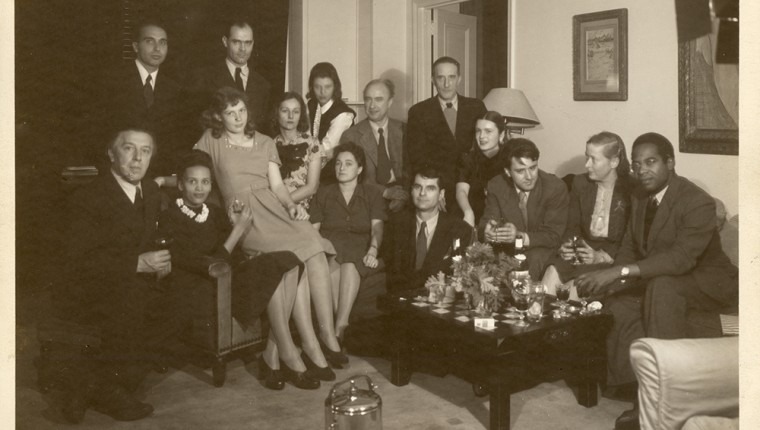 . . .
The exhibit Aimé Césaire: Poetry, Surrealism and Négritude explores the rich world of Aimé Césaire, surrealist poet and politician from the French Caribbean island of Martinique. It’s co-curated by The Studio@620’s Bob Devin Jones and the Dalí’s Curator of Education Peter Tush.

Featuring selections from Césaire powerful poems, this exhibition explores his role in founding the anti-colonial Négritude movement and his affiliation with Surrealism. Surrealism founder André Breton became Césaire’s friend and supporter. When Césaire’s book-length poem Cahier d’un retour au pays natal (Notebook of a Return to the Native Land) was published in 1947, Breton said it “is nothing less than the greatest lyrical monument of our times.”
. . .

. . .
In honor of the exhibition, Bob Devin Jones created Until the River Never Grieves, a celebratory “choreopoem.” This theatrical piece mixes Césaire’s poetry with Jones’s own, through voice, music and dance.

“Until the River Grieves is my joyous response in researching the life and creative work of Aimé Césaire” says Bob Devin Jones.

. . .
Jones shares selections from the original performance script here.
These words are his own.
. . .

Every poet may become a playwright
But not every playwright can become a poet
You see, the poet masters the inscrutable nuance of language
one word at a time
In a Promethean effort to illuminate the evidence of things not yet tasted
Poet uses the grace of his wit, with the unrelenting clarity of a shimmering steel scalpel
with economy of just one word
with an emphatic empathy
Poet jars the floor by giving word Vox
Negritude, Rhythm. . .  Life itself
Somewhere far below the level of his sex
Poet seeks not to “prose-splain”
Rather to navigate his place of origin, not from the ignorant present
but with the atavistic fury of ancestors

The hurt dirt of Africa holds the memory and the bones of all humankind
This archaeology is heady work if you can get it
He (Aimé) got it. . .
Like a bent Calypsoed clock, torqued in the middle
Beseeching the heavens to embrace the shadow (the darker brother)
And shadow the embrace
everyone of us has been a witness. . .  to what happens next
So we created. . .  imagined
Alegba (the African trickster)
works like a shaman, a dancing midwife
a poet, to sift through the detritus. . .  as
burning house becomes ashes
And all the wailing souls
Become dust beyond pain
The ground weeps
The earth is scorched
poet scatters the tears, mingled with this specific history
This epic displacement of African peoples perforce made the gods leave Africa too
they scattered these “shadows” to the Americas the Europes the Caribbeans
Australia the shores of Asia

“There is this hurt”

nothing is neither good nor bad
only thinking makes it so
20 20 is no longer the provenance of hindsight
that clarity is the sole dominion of prophecy
“the who of am I?
if asked
is always answered in the present
and revealed in the very next future
we call it. . .

the constant and unrelenting bedlam of most of the 20th century
and much of this one
gives me. . .

gives me pause. . . there is no partition in what I know of this world
the one we have created
and my aspirations for it
our wounded arrival in this hemisphere
and the grotesque, arduous reverberations over millennia
and the jabs
the endless lacerations to the sinews of the heart
the heart is resilient and a very tough muscle indeed
hope resides there too
we are only in the third round of the bout and the knockout
when it comes. . .  (if it comes) will be in the fifteenth
and the gods if they are still watching, will adjudicate a draw
besides, it is in the penultimate round,
that is where. . .  life repairs itself

From Until the River Never Grieves, by Bob Devin Jones
. . .

The Dalí Museum’s exhibit of Aimé Césaire’s life and poetry
runs through December 5 and is free.
You can find the details here.